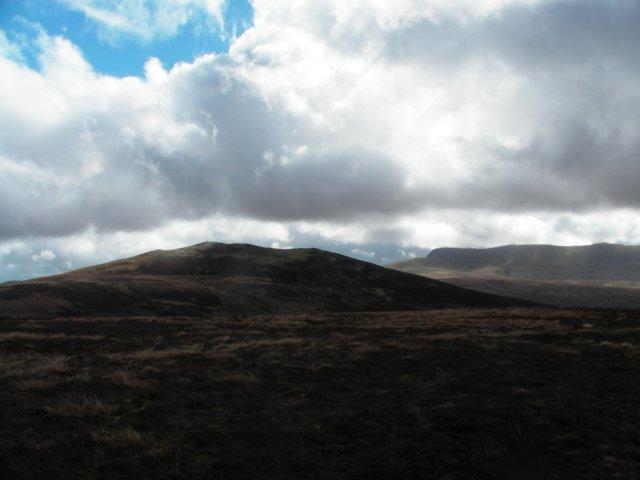 Skiddaw House is the highest youth hostel in England, and I took advantage of a 1,550 feet head start today.

Today I’m not strictly doing the Cumbria Way. Today and tomorrow I am doing some side walks to take advantage of the location, and I will continue the trek itself on Tuesday.

A similar start to yesterday weather-wise. Breezy and rain showers with forecast to clear. Having survived the hardest day yesterday, overnight I decided to go for maximum unashamed peakbagging today and so I targetted the fells to the north west with the aim of shortening my walk out on Tuesday. I was glad I did too, because it was a struggle today, so I don’t want to think about how hard it would have been with my full pack.

I set off just after 10 heading west on the path towards Dash Falls. But soon after crossing the first footbridge, I struck off to the right up through the heather of Great Calva.

This was only a couple of hundred metres ascent but I was puffing well as usual on the first climb of the day. 10 minutes after leaving on came the waterproofs for the first shower. But on the plus side this brought on a rainbow to my left.

I was at the summit before 11 and after a brief pause for photos, I followed the fence as it swung round on to Little Calva, my next target. The summit of Little Calva is just a cairn in the middle of the heather/grass rather than a particularly prominent rise, so I didn’t linger.

Following the fence again north I crossed at the stile where it swings right towards Great Calva and then descended towards the col with Knott.

The 160m ascent of Knott from the col was hard work, but once up there I had a good view north over High Pike and Carrock Fell, east over Blencathra, south to Skiddaw, and west towards the coast.

I paused at the top to take stock and decide what to do next – carry on to High Pike and Carrock Fell, or leave them for Tuesday ? A quick estimate resulted in me concluding that if I went for them, I’d get nothing else done today, and it would be better to work my way round to Great Sca Fell and neighbours.

So I descended to Great Sca Fell and surveyed the other fells spreading like arms below. I dropped down to Little Sca Fell, took refuge in the shelter at the cairn there, and stopped for lunch. A slightly unusual shelter as the stones aren’t built up very high – instead the ground is scooped out below and inside to create the height of the protectin wall.

Next was Brae Fell, a straightforward stroll across grass. But not being sheltered by other fells, the wind was much more noticeable here. And there was some ominous looking black clouds heading my way from the west.

Returning towards Little Sca Fell, I contoured around to Lowthwaite Fell, but bypassed the summit and headed for Longlands Fell instead.

When I’m out for a walk like this I generally identify a turnaround time – ie the point at which I have to start heading for home, and representing the furthest extent of my walk. It varies from walk to walk, but it usually about 2/3 of the total estimated walk time, and usually falls somewhere in early to mid afternoon, depending on when I set out. Today Longlands Fell was the turnaround point, and I knew at this point, I’d never have fitted in High Pike and Carrock Fell too. Still 3 summits to go, but they were all on the way “home”.

I returned from Longlands fell, this time over the summit of Lowthwaite Fell, and then things started to go against me. Descending from Lowthwaite Fell I felt the edge of a band of rain trying to overtake me, so I forged on and started to contour around Little Sca Fell to Meal Fell. Rising through the 550m level, the rain became hail, becoming harder with every metre of height gained. Soon it became too much and I admitted defeat, stopping to get out my storm shelter. By the time I’d got it out and fumbled it over me and my rucksack, the shower had stopped. Great.

I carried on, and made it around to Meal Fell, just as the sunshine appeared from the west. 9 summits out of 10 now done, I headed down to Trusmadoor, arriving just in time for one final shower. I sat this one out in the lee of rocks. Then I was up Great Cockup quickly, and the tenth was in the bag. Now just the walk out.

My planned route off Great Cockup was to angle down the side of the fell until I intercepted the path, but I’d not taken into account the heather, which made this difficult as I followed a succession of what appeared to be tracks down the heather, but which proved to be random bald patches and sheep meanderings. The name of the fell was proving oddly apt, as it took ages to get down, and then the farm track I chose to take me around the bottom of Little Calva proved to be horrendous, undulating, slippery all the way to Dash Falls, where I then couldn’t easily cross the fence and Dash Beck to join the Cumbria Way 20 feet away. Eventually I found a gap in the barbed wire, but went in up to the knee as I tried to leap the beck. Still I was off the fell, wet but safe and just had to slog back to the hostel – about 40mins along a wide easy path.