I thought I wouldn’t get much more walking in this year, but with a delay in starting work (due to not having any yet!) and a spell of fine weather, the opportunity was too good to miss.

I decided last week that after several weeks of holding off due to uncertainty around my work situation, that I would aim to walk at least once a week if I knew at the start of that week that I wasn’t going to be working. This was the first week, and with the forecast for hot sunny weather all week, I planned a 2-dayer to catch-up on some more of the North Downs Way.

The plan was to start at Wrotham, where I left off in June, then it’s about 10 miles to the Medway Bridge and a further 5 to Blue Bell Hill. Then various villages (several with stations) to the north and east of Maidstone at 3-5 mile increments giving me some flexibility for end point on day 2. I didn’t think I’d get further than Blue Bell Hill on day 1 because I wouldn’t be starting until about 10am, it would be warm and I’ve not walked for a few weeks.

First a few words about planning it. Kent may be close to home, but the further east along the Way that I get, the harder it becomes to make day walks viable from home. This is largely due to the time needed for travel connections. So a two day walk with an overnight stop somewhere close to the route should work well. Well, I say that, but when I came to investigate the overnight options for this particular walk, I had nothing.

The North Downs Way achieves something quite amazing – it’s a long distance walk through one of the most heavily populated parts of the country, but manages to avoid towns and villages. Great for walking but not for accommodation finding. So I had to look off-path for somewhere to stay.

First, places within a short walk of the path: basically two options, both of which were campsites. The first was a campsite at the top of Blue Bell Hill, but this turned out (despite what its website said) to only accept caravans and for two nights. So the best option was gone. The alternative was Detling – two campsites. At a further 6 miles on from Blue Bell Hill, I ruled this out as being unrealistic, and as it turned out was right to do so.

Second, places a quick ride on public transport, which meant bus in practice. My first thought was Medway Youth Hostel. This turned out to be two bus rides away and a lot of time. Not really viable. Next I looked at B&Bs and independent hostels in Maidstone. I ruled most of these out on the basis of cost.

In the end I called my parents and arranged to stay with them, and to pick me up/drop me back off at Blue Bell Hill. This worked well. Of course I could probably have wild camped, but I simply couldn’t be bothered.

My wife dropped me off on the Pilgrim’s Way to the north east of Wrotham just after the point that the path crosses the M20. I walked along the road, and emerged into the open with farmland on the right after a few hundred metres. Mist was sitting over the valley, but it was forecast to clear and become sunny and warm.

I quickly passed the point I’d left the path last time, and soon I was in the fields skirting Hognore Farm and then climbing up through Hognore Wood to the A227. Here I turned right onto the Trottiscliffe road and a short way down cut left into the woods again. As I left the road, I saw another walker ahead of me, who I was catching fast.

These woods below the village of Vigo are part of Trosley Country Park and have a myriad of paths and walks, so some attention is needed to make sure that one stays on the NDW – I know from experience along this stretch that the waymarking in the woods can be patchy. I found and kept the path quite easily though, but saw no sign of the other walker ahead of me and assumed he’d gone astray.

By now I was up to speed and making a decent 3 mph pace on average, including the ups and downs. I motored along through the woods, there not being much to see apart from trees. By 11 when the path dropped down from the woods to the bottom of the escarpment I’d made good progress, and I could see the mist had started to lift, with shards of sunlight cutting through the trees. 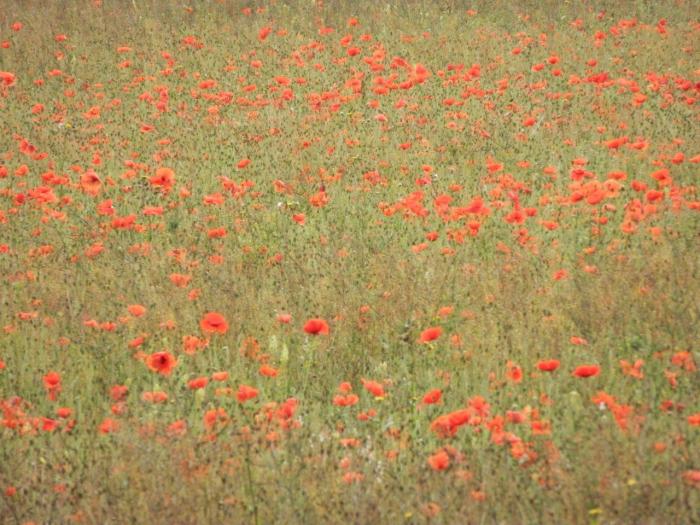 I spotted a field of poppies on the right, quite common in this part of the world, stopped to take a picture and was then startled by a voice addressing me from behind. This turned out to be Andy, the walker I’d seen ahead of me and who I’d overtaken while he stopped for coffee. He’s walking the entire NDW in one go, wild camping along the way. His pack was about a similar size and weight to mine, but somehow he had all of his camping gear.

Andy and I then walked together for the next 3 hours as our pace was about the same, and most of that was spent in walking-related discussion. But we also made good progress, maintaining the 3mph average.

Soon we climbed up to Holly Hill and headed north along the road before turning onto a byway through Greatpark Wood. From previous experience I knew this was a horrible stretch of walking as this byway gets churned up by 4×4 vehicles and is deeply rutted. It was no different this time and there were several 1m+ deep ruts with pools of water in them. In a number of places we had to detour off path and walk through the rough woodland to avoid particularly hazardous bits.

Now, the other thing I remember about this stretch off the path is the waymarking, or rather lack of it. This wasn’t helped by the fact that a number of the signs had clearly been vandalised, by having the arrows/badges removed or simply knocking the posts over into the undergrowth where they couldn’t be seen. So it’s no surprise that we missed our turning as we continued to follow the main wide track.

Reaching a road, we both knew we’d gone wrong. Out came the map and I quickly worked out that we’d come out on the Buckland Road near to Luddesdown. The only option was to retrace our steps and try to find the path we should have taken. But we were soon back at the offending junction and there hidden in the undergrowth was a felled signpost, although what it was signing was a mystery as the waymarkers had been stripped off. But the right turn we should have taken would put us back roughly in the right place and after a while we met the NDW again as it joined from a field to the right. We’d not missed much. After this we were more careful with the signs, although the quality of waymarking was still poor, despite the efforts of Kent County Council, who do a much better job than Essex do of maintaining and signing footpaths.

Andy’s confidence in the route was clearly shaken, and with him targetting reaching Detling (a 20+ mile walk for him for the day), he couldn’t afford any more slip ups. But now I was on the part of the path I’ve walked a few times before, although convincing Andy that the way was right was harder. His confidence built as I predicted accurately directions that were upcoming including the point that we turned left and dropped out of the woods to cross a valley.

Here he thought he’d seen his first Oast House, but I had to disappoint him by pointing out that it was a new build. We crossed through North Wood and the Bush Valley and were soon in Upper Bush. Now I really knew where we were. We cut along the northern edge of Cuxton, crossed the railway and were then on the Rancombe estate.

It was now 2pm and I’d been walking solidly for 4 hours, and estimated I’d done about 10 miles. I stopped for coffee and lunch, but Andy felt he had to press on because of his target for the day. So we parted and agreed to look out for each other on the walk later in the day and the next.

In some ways it was a mistake to stop, as I found it hard to get going again, and the afternoon was a struggle. As I approached the Medway Bridge my feet were starting to hurt and my leg muscles were starting to tighten. But I looked down on the Medway and was glad that I’d reached this key milestone on the NDW. Having just completed my “local” part of the Way that I’d done walks on several times before, every step now was new territory, walking-wise.

This was also the last point at which I could sensibly bail out of today’s walk early and get easily back to my parents’ house, either on foot, or with a lift. But I slogged my way across the motorway bridge, crossed under the M2 and was then on a lane alongside. Now it was a battle with the feet to keep going as I pounded the hard surface. At Nashenden farm the NDW heads off right to cross the Channel Tunnel Rail Link and then climbs up along the edge of the fields to follow a wood. But this soon emerged onto a hard-surfaced byway and my pace dropped as every step hurt more and more. The byway became a proper road as I approached the Robin Hood pub and I knew now that Blue Bell Hill was definitely today’s end point. I made the call and sat and waited for my lift.