For some reason I seem to have talked myself into covering a top 20 of fells.  And I was going to cover the lower ranked in the top 20 in batches, so that I could quickly get to eulogising about the very special ones at the top of the list.  But as I sat down to write this first post, I realised that it would take a long time, so I’m going to do each fell separately.  And that’s no less than they deserve.

Helm Crag doesn’t really need much of an introduction, as so many of us have walked it, or at the very least seen it from the A591!  Helm Crag is a magical fell in that the rock formations atop its crest seem to morph into new shapes as you change vantage point.  Home of the Lion and the Lamb, (indeed an alternative name for the fell), and the Howitzer forming the summit of the fell and the only summit that AW never stood atop.

Helm Crag is an easy, by Lake District standards, walk up an obvious ridge on an obvious path.  Partly because it is short and easy, and so inviting, I found myself the youngest person on the path on the day I climbed it – by some margin.  Although to be fair, there were some younger ones at the top when I got there.  Climbing the Howitzer itself isn’t that difficult, although it’s still a good strategy to let someone else go first and watch their attempts to find hand and foot-holds, before having a go yourself.  Getting down is harder though as the holds you use to get to the top aren’t all visible from above, and I found a certain amount of blind faith was called for.  I arrived back on terra firma with a few scrapes on my hands but otherwise unharmed. 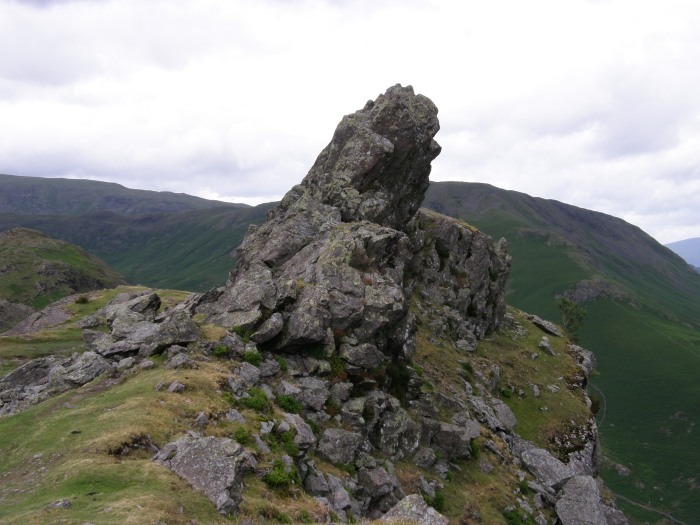 Helm Crag then leads onto the next fell, Gibson Knott, home of a rock I particularly rate as being good for a sunny afternoon nap against, before leading you into the needle in a haystack that is the hunt for the true summit of Calf Crag.  All good stuff, but Helm Crag is clearly the star of the show.

Trail Magazine like it too, so much so that they’ve included it in their Trail 100 list of the best hills in the UK.  But I wonder how popular it would be if it weren’t so close to a main road and the tourist magnet that is Grasmere ?  That’s its only real downside – you can pretty much guarantee having to share the fell with several other people if you go in the decent weather months.

All in all though, the fell is good value for such a short walk – you get great views down into the valleys around Grasmere, it’s got some rocks to play around on, and the fell is attractive in its own right when viewed from most angles.

What’s not to love ?