Today was a severe test of resolve and several issues were thrown my way. Not all of them were successfully resolved.

I woke to the sound of rain pattering on the tent. I’d expected that but not for it to last 4 hours. So the tent was wringing wet by the time to strike camp. I also noticed a couple of drips through the inner and made a mental note to do some more seam sealing when I get home. 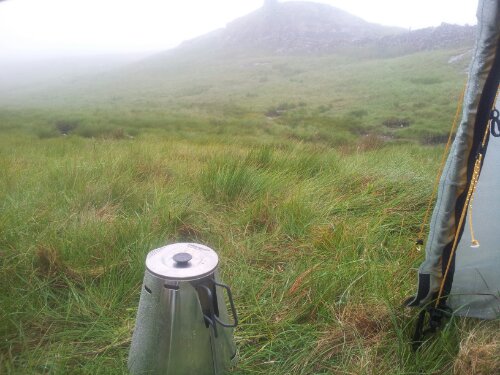 I packed up and headed uphill onto Yoke, following the path by the wall in these misty conditions. Boggy patch after boggy patch was negotiated before the main path was joined and the relative security of stones underfoot. The wind rose as I rose and rain was thrown at me in waves. After staring down the weather yesterday, today it was up for the rematch. And won convincingly.

I assesed the situation at the summit of Yoke. Two options – descend back to the Garburn Pass or continue, with the next bailout option being two summits further on. I decided to continue – mainly because I didn’t want to leave a part completed ridge walk.

It speaks volumes that I was considering bailouts at this early stage in the walk.

Ill Bell came and went as did Froswick and I slogged up into the wind, which now seemed to have veered more westerly than south westerly. As the ridge narrowed foot placement needed more care unless I wanted a very quick descent.

I reached the point where the path up from Troutbeck joined and which represented emergency exit 2. I carried on though as a short distance would see me on the next summit. And would give me more options for what to do next. If I could avoid it I didn’t want.to be back in the Troutbeck valley as that would really mess up my plan.

A path branched off to the right and High Street – my original destination after Thornthwaite Crag. But High Street was out of the question as it was clear that my original plan for a camp on Arthur’s Pike or Bonscale Pike wasn’t going to happen. And I also didn’t fancy a descent via The Knott either – it just wasn’t worth the extra walk to bag High Street if I was going to descend anyway.

I reached the summit of Thornthwaite Crag and collapsed in the lee of the wall huddled under my storm shelter. I stared at the map hoping plan B would come to me. Common sense said descend. But how – over Gray Crag?  Via Caudale Moor?  Or directly to the valley?

The valley route won out but I was sat there nearly an hour before I got moving, the main thing getting me going again being the realisation that I was getting cold and starting to shiver.

I stood up and staggered around the wall just as a large group passed. They led the way down to Threshthwaite Mouth. I lurched down in their wake taking extreme care in my cold, weary and demotivated state.

Suddenly the cloud cleared to reveal the valley stretching away to the right and a magical haven it looked. I neared the bottom of the slope and strode out across the flatter ground. The next thing I knew I was on the ground with my left leg bent under me. My left knee throbbed with pain, having taken the full force of the landing. My trousers decorated with a rusty stain.

I stood up and hobbled a few steps. Nothing broken or sprained but hurt like hell. Definitely time to descend. I veered off to the right and down into Threshthwaite Cove.

The other main issue today was water. Plenty of it around but very little of it drinkable. Even after filtering it still looked like the contents of a urinal and it tasted foul. There seemed to be no decently flowing streams just rivulets through the peat.

So by this time I was running short having almost exhausted my leftovera from the day before, and it was with joy that I saw some nice clear fast flowing water just off path. Clearly at some point it had been across the path and so was likely to not be quite as wholesome as it looked. But it looked and tasted fine after running through the Travel Tap.

At the end of a hard day, a valley route like this can still be much harder work than it looks and the path rose and fell all the way down,passing a boulder field and weaving through drumlins. I reached the lane to Hartsop and set off for somewhere to stay for the night.

An hour later I was holed up in Patterdale Youth Hostel. Today the lure of a drying room won out over a night on the fells.

I looked at the forecast for the next day and groaned. More wind and rain and a poor outlook. I went to bed still undecided about what to do the next day.