2012 has been a bit of an odd year and after taking 8 months off in 2011, this year was always going to be a little more work focussed. However, I never expected my current assignment to last into the summer, let alone make it to the end of the year. Whilst this kept me from big chunks of time on the hills, it has been advantageous in two ways. Firstly, that  it has now put me in the position of being able to take an extended break in 2013 which will afford the opportunity to undertake some bigger walks (more about that later). And secondly, the nature of the assignment meant a far greater degree of flexibility and the ability to dictate when I took time off than I might have got from a different client. That ultimately resulted in more trips.

What this has meant is that I’ve done much more walking during the year than I thought I would, amounting to 9 trips to hilly places, and once local adventures are added in, to a total of 28 walks covering locations in the Lake District, Snowdonia, Yorkshire Dales, Peak District, Cornwall, Kent and Essex. If nothing else, I could never have dreamed of walking in as many places as this during what was supposed to be a head down working year.

The other thing I never expected was to reschedule, postpone, cancel or bail out of as many trips as I did. And of course it was the weather to blame. It’s been a pretty shocking year for getting decent weather and walking times to coincide, and the number of times I’ve changed plans really reflects the fact that for me walking is about enjoying it more so than persevering whatever the conditions. That’s not to say I haven’t been out in some pretty frisky weather and coped with it – but if I know it’s going to be miserable and I can hold fire for a better opportunity, then I have generally done so.

Another theme of the year has been the re-emergence of camping in my walking and this has led to a much more flexible approach to trips with no accommodation to book, and hence a much lower (or even zero) lost cost if I bail out or decide not to go. But I seem to have spent all this saved money on new kit instead. In time this should pay off.

I could ramble on for ages about the year, but it’s probably best if I let the pictures do most of the talking. 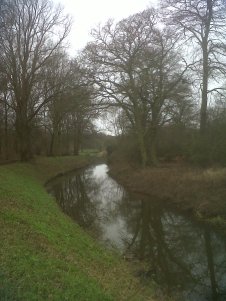 Heading into the snowy wilderness

Setting off towards Alwen Reservoir and Mwdwl-eithin 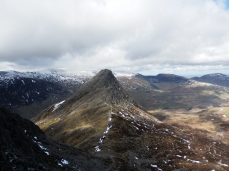 The pitch at Codale Tarn

Me at the summit of Pike of Stickle 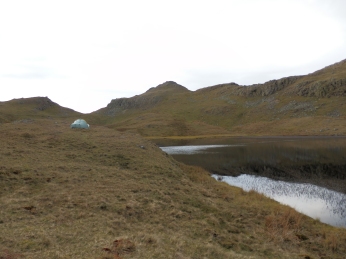 The pitch at Tarn at Leaves 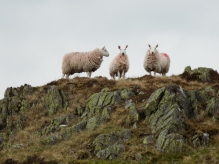 My favourite spot on the Glaramara ridge 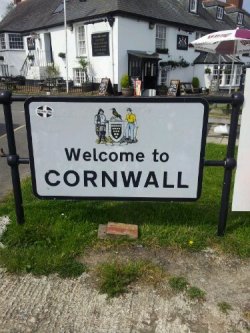 Birthday camp on the North Downs 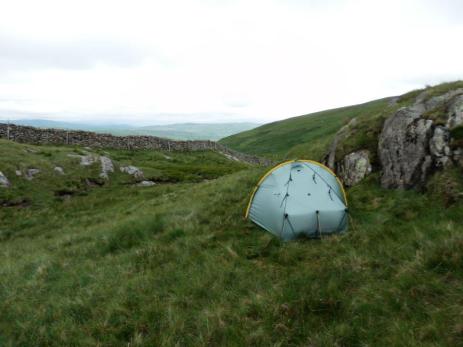 The pitch at Garburn Pass 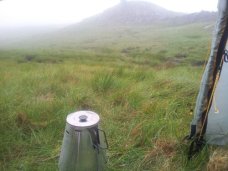 It didn’t get any better than this 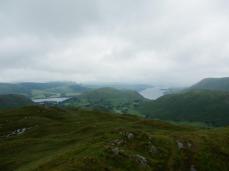 The Pennine Way route up Pen-y-ghent 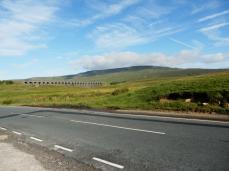 Whernside and the Ribblehead Viaduct

Along the ridge to the main top of Rough Tor

The group assembles and starts some serious gear talk

Heading down from Hitter Hill 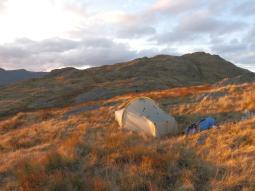 The Year in Stats

Highlights of the Year

The year only really got going in April with the trip to Wales where we caught the tail end of the snow. A cold scramble up Tryfan’s north ridge was memorable for the hail and rainbow and my companion’s trousers losing their structural integrity half way up. The picture of Tryfan flecked in snow in the gallery above is one of my abiding images of the year.

My first wild camp at the start of May was of course memorable too, and I begun my wild camping career with nice pitches at Codale Tarn and Tarn at Leaves. It took until September though to get a decent sunset and cloud inversion on a camp, and in the meantime I had several wet/windy/misty pitches, in particular a very wild night at Small Water where the tent was really tested.

2012 was also memorable for socialising. As someone who does the vast majority of my walking solo, it made a nice change to meet up with various people from Twitter – in particular @LoneWalkerUK, @InSearchOfCloud, @FlintyRich, @Leerockwell15 and @munro277 and a whole load of people, too numerous to list at the Peak Meet.

The coming year should be a lighter year work-wise and so I’m looking to undertake some longer walks. Foremost amongst these is the Cambrian Way which I’ve pencilled in for late April/early May and which should take 3 weeks. I’m going to try to do it in one go, but won’t see it as a disaster if I have to do it in two – I’m doing it for the quality of the walking more than the personal challenge. Then there will be the annual chunk of the SWCP, which because we cut it short this year due to family illness will see us repeating the stretch between Looe and Par before continuing along to Falmouth. I’m sure there will also be a handful of meetups along the way, chiefly the winter Peak Meet in February, rumours of a gathering in the Cheviots, and quite probably some short notice impromptu meets with whoever is at a loose end. Sprinkled among this lot will be some Lake District trips, the completion of the North Downs Way (7 years after starting) and possibly another shortish long distance path. And lots more wild camps. After all, I’ve got the cost of all that new gear to recoup.