Yes, you heard it here first. Despite appearances to the contrary, there is culture to be found in Thurrock, which may I remind you was recently determined as the most miserable place in the country, according to Cameron’s new-fangled happiness index. And I can reveal that it is more than a bit shit here. So I set off on today’s walk with extremely low expectations…The walk is part of a strategy to add more variety to my local walks with the hope that this will also result in more walks. So I hit upon a plan to walk the riverside, or at least as much of it as possible – it’s a major industrial area, and so access is patchy on the waterfront. Or as I will call it today, the mudfront.

The first leg of this walk was upriver, with the aim of walking from Grays to Rainham – a walk of about 9 miles plus a bit more to get to/from home. Having to be be home for school chucking-out time, I opted for an earlyish start, and left the house just before 8. The sun was just coming up as the first kids drifted into school – that is the ones with the gumption to do pre-school activities – mine were still deep in their pits.

A battle between blue and grey was being fought in the sky, and would continue for the rest of the walk. Tinges of orange from the just-risen sun sneaked their way through the clouds. I crossed the railway and arrived at the waterside. Downriver, the sky was doing its best to make Tilbury Power Station look attractive, in a vain attempt to entice me that way. But that’s for the next walk. I turned my back on Tilbury, put the river on my left and slid my way along the muddy path between the sea wall and the back of the first industrial estate of the day.

A slightly sweet aroma in the air heralded my arrival at the Procter & Gamble factory, barely containing my disappointment that today was not strawberry day. But here was cultural stop number one on our tour.  A famous movie location. Indeed the highest grossing UK film of all time (well, it was in 1994!). have you guessed yet ?

Apart from a trip to Scotland to film some scenery, most of Four Weddings and a Funeral was shot in or near to London. And Thurrock was the scene of the Funeral, the producers clearly wanting somewhere suitably grim-looking without having to travel too far. They probably got the idea from the nickname formerly attached to our local railway – “The Misery Line” (incidentally, no one uses that term any more, and our line is the best performing commuter line in the country). The church of St Clements used for Simon Callow’s character, Gareth, is situated right next to the P&G factory and when the church’s future was looking bleak in the late 80s, P&G took it over and looked after it. To get in you now have to ask at the security gate and they don’t take money in the collection at the church – you’re expected to leave a bottle of Old Spice or Fairy Liquid.

I guess the filmmakers also wanted to highlight the difference between Gareth, a fun-loving type who clearly didn’t give a toss for where he lived, with the trendies in his circle living it up in London.  But it’s the grimness that really comes through, and for me the most memorable still from that film is the vista of the factory with the Dartford Bridge in the background, on a typically grey Thurrock day.

Today’s route didn’t pass the church itself, so I carried along the narrow strip of path by the sea wall, and soon came to the major cultural shock of the day. A wall of graffiti stretching for over a mile nearly all the way to the bridge.

Except this wasn’t just graffiti Ok, sure there was a big proportion of people’s “tags”, but interspersed with this generic defacement were some actual artistic gems: 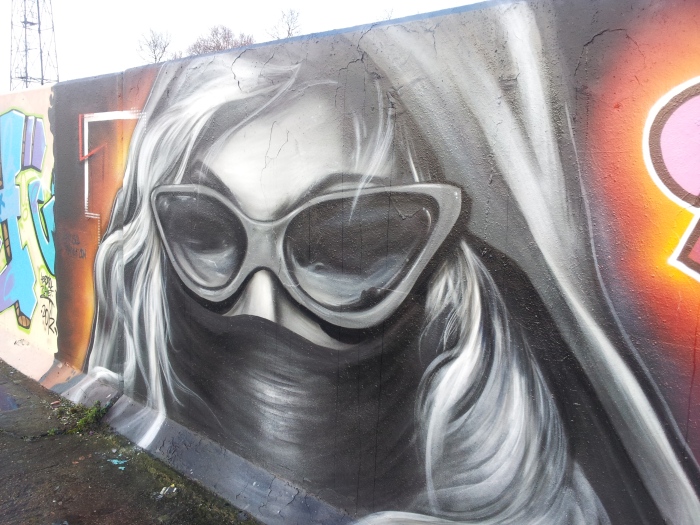 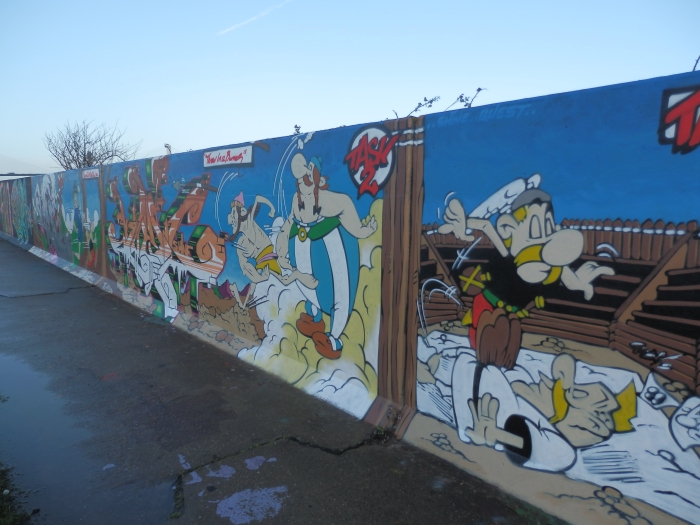 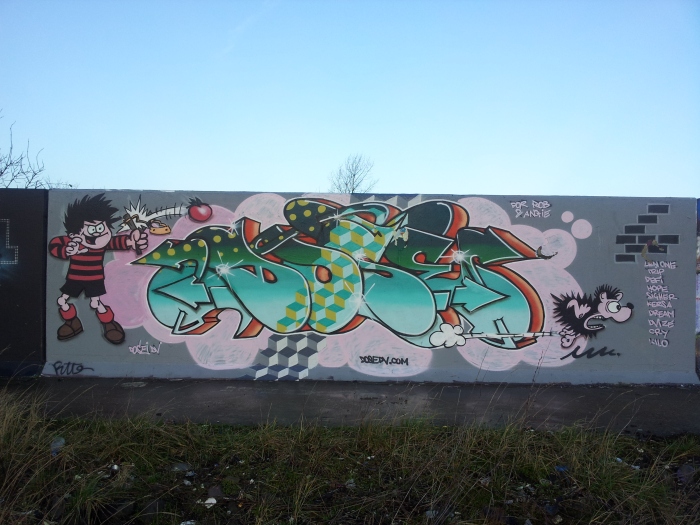 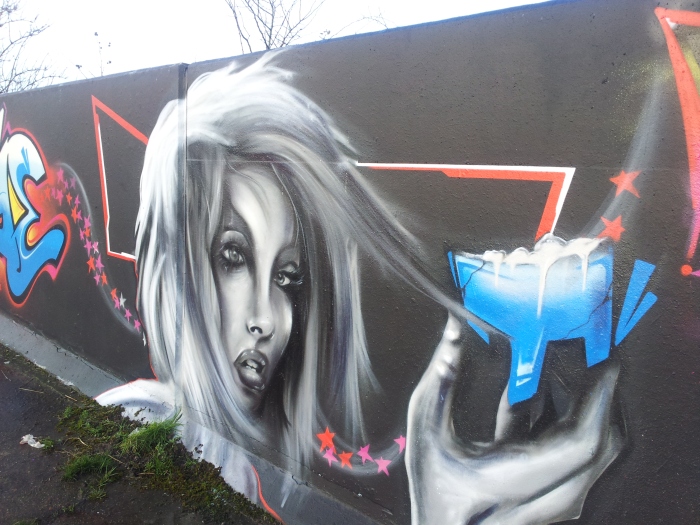 And these were only the ones after the point I decided to take photos – I just couldn’t be bothered to go back for some of the earlier ones, which were even better. It was pleasing to see that for the most part these genuine pieces of art had been left alone by the other vandals, even them recognising talent when they see it. There were also a couple of really clever ones where images of faces seen from afar were revealed up close to just be pixellated shades of pink. Really clever.

I followed the wall for its entire length, marvelling at the show that only the passing ships really get to see. And it was obvious that some of the murals had been done deliberately for the benefit of those ships.

I arrived at the bridge and passed below the soaring structure, recalling the day it opened when I listened to the official opening on the radio at uni. The sun poked out overhead, attempting to add a bit of drama.

Now the sea wall was on the left, punctuated by flood gates, and on my right was a constant stream of industrial units. But poking up in the distance was an oasis of culture.

Yes, the Royal Opera House, and their move of a lot of their production and preparation work out of London has been a great success – both for them and for the local community. Who’d have thought it, in the most miserable place in the country?

I arrived in Purfleet itself and the path diverted into the village itself, and having only passed through on the train before (uninspiring), it was surprisingly non-grim. In Purfleet, I picked up the start of the London LOOP and NCN 13 and headed for the marshes.

But first a quick look at the old ammunition store: 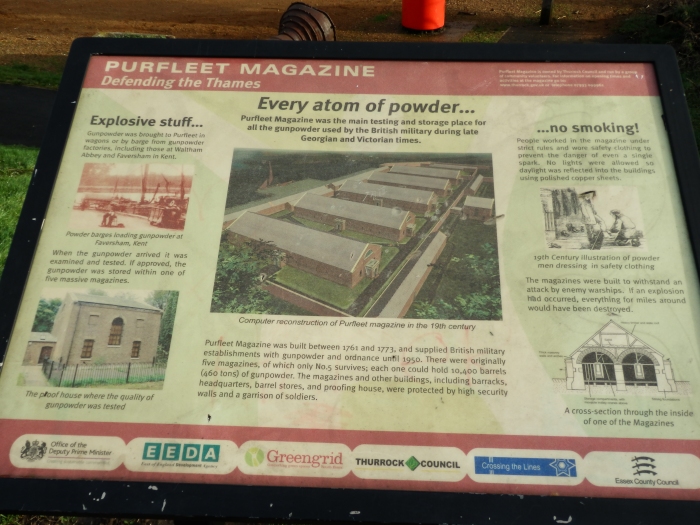 I rounded the corner and arrived at the millemium circle thingy, inscribed on the inside with the key dates in Purfleet’s history.

I crossed a small bridge and arrived in the RSPB sanctuary. Reclaimed marshland and the loneliest part of the walk.

I took a break on what looked like an old railway sleeper, and got on the outside of some coffee. Enjoying a much emptier view than would normally be expected after so much industry earlier on. You’d think that it would get more built up as we neared London, not less. The rain started as I finished my coffee and I got going again. Leaving the bird place I found myself skirting on the seaward side of a large grassy mound – an enormous landfill site. The rain pattered down, growing in intensity as I headed right into the teeth of the weather front. Up on my right, bulldozers moved on the earthy skyline, thousands of birds scavenging amongst them. On my left, the seagulls were having a party on the mud.

Head down in the rain and strong wind, I counted down the marker posts that were spaced every 400m of the 4 miles still to walk. Up ahead a patch of blue signalled the passing of the rain, and I emerged from the depths of my softshell to see the tall buildings on docklands fuzzily in the distance. A graveyard of old boats marked the end of the landfill section and my leaving the riverside at Frog Island to head inland for the train home at Rainham.

But just one final piece of artwork, all by itself on a metal bridge. 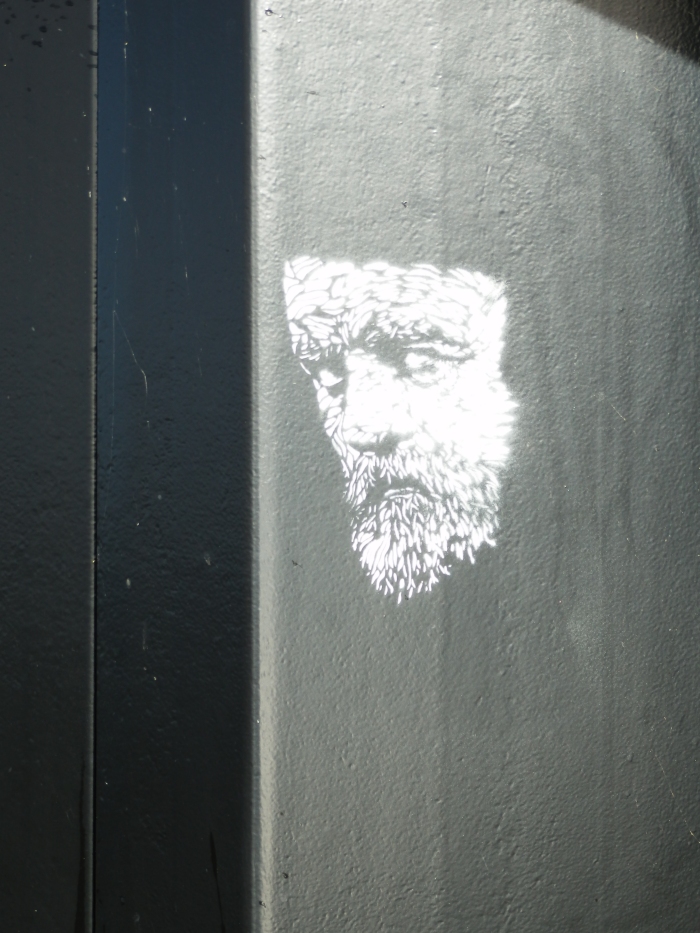 To say that I was surprised by this walk is quite an understatement. I’d expected a fairly dreary industrial walk along the river, but was unprepared for the artwork and the tranquility of the bird sanctuary. I’d seen the “V” on the map, but hadn’t any thought to what kind of visitor centre it was. Just goes to show that there are good things out there where you least expect them, and quite often right under your own nose.