Andy came over and delivered the news that would tip any cider connoisseur over the edge into a full breakdown: “They’ve run out of draft Addlestons, there’s only bottled Magners left.” This was on the very first evening of the meet, which therefore put in jeopardy the whole “social” aspect – or at least it did from Andy’s and my perspectives. And where had Alvin got to ?

Rarely have I been packed and ready for a trip and found myself sitting around waiting for the clock to count down until it’s time for the 7 minute walk to the station. Usually, it’s a case of discovering last minute that I hadn’t yet re-laced my boots, throwing into confusion my split-second timing for getting my train. If I do ever have spare time before departure, it tends to result in a last minute addition of gear that never actually gets used, which is equally dangerous. I sat impatiently for a while, left slightly early for the train that was itself half an hour before the one I really needed to get, and found myself having to kill time at St Pancras – which was OK as I’d never actually been there, so a bit of look around was in order.

Two and a half hours later and I stepped off the train at Sheffield, somewhere I’d also never been, and got on the train to somewhere I had been before – Hope. The train plodded south back past the sights welcoming a visitor to Sheffield from the south – B&Q, Tescos, a garish mosque and rows of terraced houses on the hillside which were straight out of a scene from The Full Monty. The train swung round to the west and headed into the setting sun.

I walked down the lane from Hope station and swung right onto the main road into the village. Then a mile-long uphill climb to the cement works and Pindale Farm. I stuck my head around the door of the bunkhouse, spotted Andy (@mixedupmessedup) and Rob (@TheWindybum) and two strangers. One of these was clearly female and my Holmesian powers of deduction concluded this must be Christine (@Chrissiedixie2). The other turned out to be Richard (@rbirnie), a mate of Rob’s. Greetings exchanged and a mug of tea in hand we sat down to chat and wait for the others. Alvin (@DarkHiker) had tweeted that he was on the M1 as my train sat at Derby, so we expected him soon. But a call with Andy showed that he’d spent much of the day on the M1 and was only now heading into the depths of Derbyshire. Even so, and having come so far, there were mutterings of turning back coming from the DarkHikermobile.

Soon the rustle of goretex heralded the arrival of the other Andy (@gooptrader), fresh from a walk, and later on Mike (@PeakRambler). We gave up waiting for Alvin and headed to the pub.

The first pint of Addlestons disappeared serenely down my neck and was followed by an equally mellow second. But it was at this point that the devastating news was delivered. Having started on cider, I didn’t really want to switch to something else, and with a heavy heart I uttered the words of surrender “Ok, I’ll have to have Magners then.” As it turned out, the Magners was probably my salvation though. Not a huge drinker anway, it helped slow my pace because it just wasn’t that nice. I’d hate to think what sort of state I might have ended up in if the Addlestons was still going strong. As it was I eventually went to bed merely pissed, instead of full-on off my face, and this probably helped the success of the next day’s walk to no small degree. Somewhere during this, Alvin finally walked in after a 10 hour journey from London – twice the time it had taken me to travel fractionally further. Clearly stressed, only the swift application of medicinal alcohol seemed to have any effect on his mood.

I woke early to what at first sounded like a piece of modern classical music, heavy on discordant percussion, but which in this case was merely the overlap of different snoring instruments. Having decided relatively easily the previous night that today was going to be a walk on Kinder, we were somehow out and about soon after 9. We parked up in Edale and headed up the road past the Nags Head. Mud, slabs and trees guided us to the foot of Grindsbrook Clough, which looked very different in the snow compared with my last visit in April 2007.

We headed up Grindsbrook Clough, winding its way left and right and becoming rockier and snowier as we got higher. Behind us the vista of snow-speckled hills opened up. As the clough narrowed and the ascent became steeper, so too the compacted snow became slippier, and eventually on went the microspikes. This was the first time I’d worn them in anger, and they were brilliant. Mike was having trouble with his snow trax which kept slipping around on his boot and I caught him looking enviously at the Kahtoolas of Andy and myself. 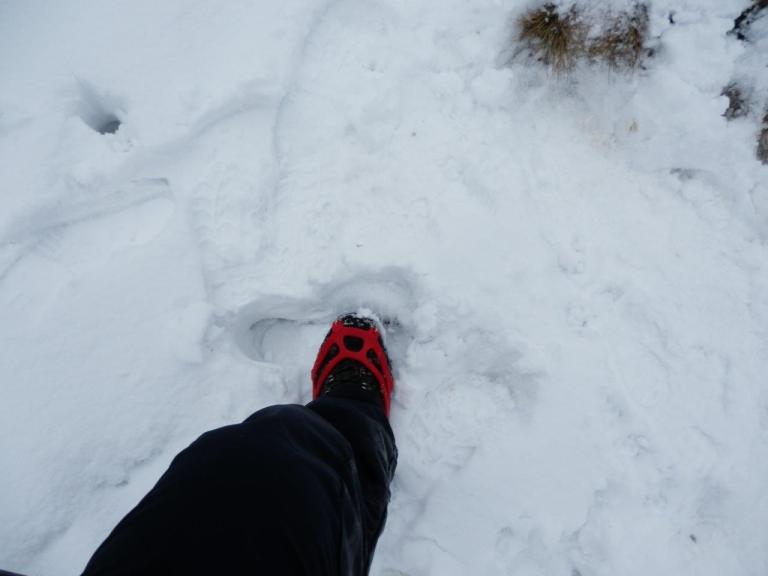 We reached the top of the Clough, moved a short way to some rocks and took a perch for a break. Hot drinks were consumed whilst we did a bit of looking at the view and some people watching. One guy came towards us with the entire right thigh of his jeans ripped open, revealing cold raw flesh. And he was wearing trainers too. This then caused some lively discussion later on. Not to feel left out, Alvin ripped his “proper” walking trousers in sympathy.

We carried on, heading along the edge of the plateau, looking at snowy rock formations and generally admiring the view.

Some of us did more than look at rock formations, as Andy felt compelled to ascend as many as possible, even if it meant scraping snow off the footholds first.

With our plan for the walk only fixed as far as which hill to walk on and which route up to take, we ambled generally in the direction of Kinder Low, but without any real drive to get there. We followed the natural line down towards the top of Jacob’s Ladder. 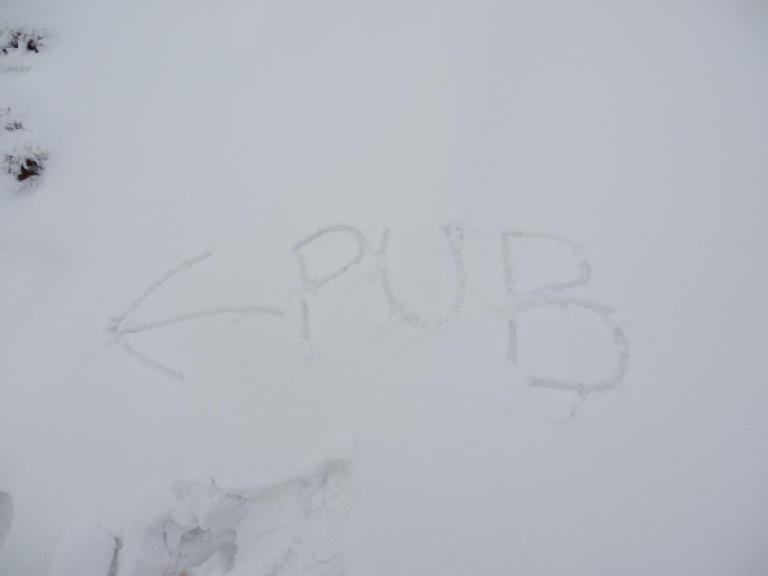 We headed down Jacob’s Ladder, encountering a pair of unicyclists on their way up (as you do!).

We ran out of snow, off came the spikes, and we walked through the lanes back to Edale.

An evening in the pub beckoned, for a change, and we headed there in twos and threes. Not a very successful night’s drinking followed. Lack of Addlestons and an air of lethargy and hunger saw us heading back comfortably before closing time, with Christine opting to head home that night due to the forecast overnight snow. However, the food was great and generous portions and we did have the brilliant suggestion of holding the next meet at a cider farm. We also met yet another Andy (@wetspaniel), a mate of Mike’s who was in the area.

Sunday dawned and the snow hadn’t really come. I’d ascertained that everyone else was intending to leave Sunday morning, and got up ready to go out for a solo walk but undecided about whether to wait around and see everyone else off, and thereby risk a very late start, or to head out anyway. In the end it wasn’t a problem and everyone left just after 9. I followed them down into the village with Win Hill as my objective. A greyer sky than yesterday obscured the hilltops and snow was falling as I reached the village. It felt like cooked breakfast sort of weather, and so I put off the walk for a few minutes with a stop off at the Old Hall Café.

Eventually I couldn’t put it off any longer and headed for the station to cross the railway and head up through the hamlet of Aston. I left the road and walked through churned up fields, my boots doing a much better job than my usual trail shoes would have done. Leaving the last farm, the mud path met the start of the snow, making for a careful walk.

I reached the top of the last field and the start of access land. A climb over an iced-up stile and I was on the hill, heading up carefully on a snowy path between what looked like heather. The path wound its way up the hill and I forked left to head for the summit, the valley below disappearing in the snow clouds. An easy path because of the gradient and the trail of footsteps, there was still a need to keep alert because of the poor visibility and the fact that everything that could be seen was white.

I reached a wall where the path for the summit itself clearly led off, the summit bulge rising up through the whiteness to the left. The path steepened and became rockier, increasing slip risk. Onto the rocks forming the summit platform and the weather hit me face-on, feeling cold for the first time. I reached the trig, but didn’t linger any longer than it took to make the decision on which way down to go. With very little visibility, I chose the retrace my steps rather than try to find my way down the network of paths marked on the map on the other side of the hill. At least that way I would know where I was going.

Half an hour sufficed to get me back to the icy stile, and having walked in just boots all the time so far, I briefly considered putting my spikes on for the mud that was to follow. Somehow I skated and squelched across it, arriving back at the road without a slip. Back through the village and the climb up to the bunkhouse to hunker down for the rest of the day and night. No trip to the pub tonight, as I couldn’t be bothered to go by myself. But I did at least get a bottle of Thatchers’ Katy to keep me company.

I woke and found it had snowed in the night, but my only concern was getting the 400m to the entrance to the cement works, after which the road, regularly travelled by lorries would surely be OK. I packed my rucksack, leaving my microspikes handy, just in case, and stepped out into the cold to begin the journey home.