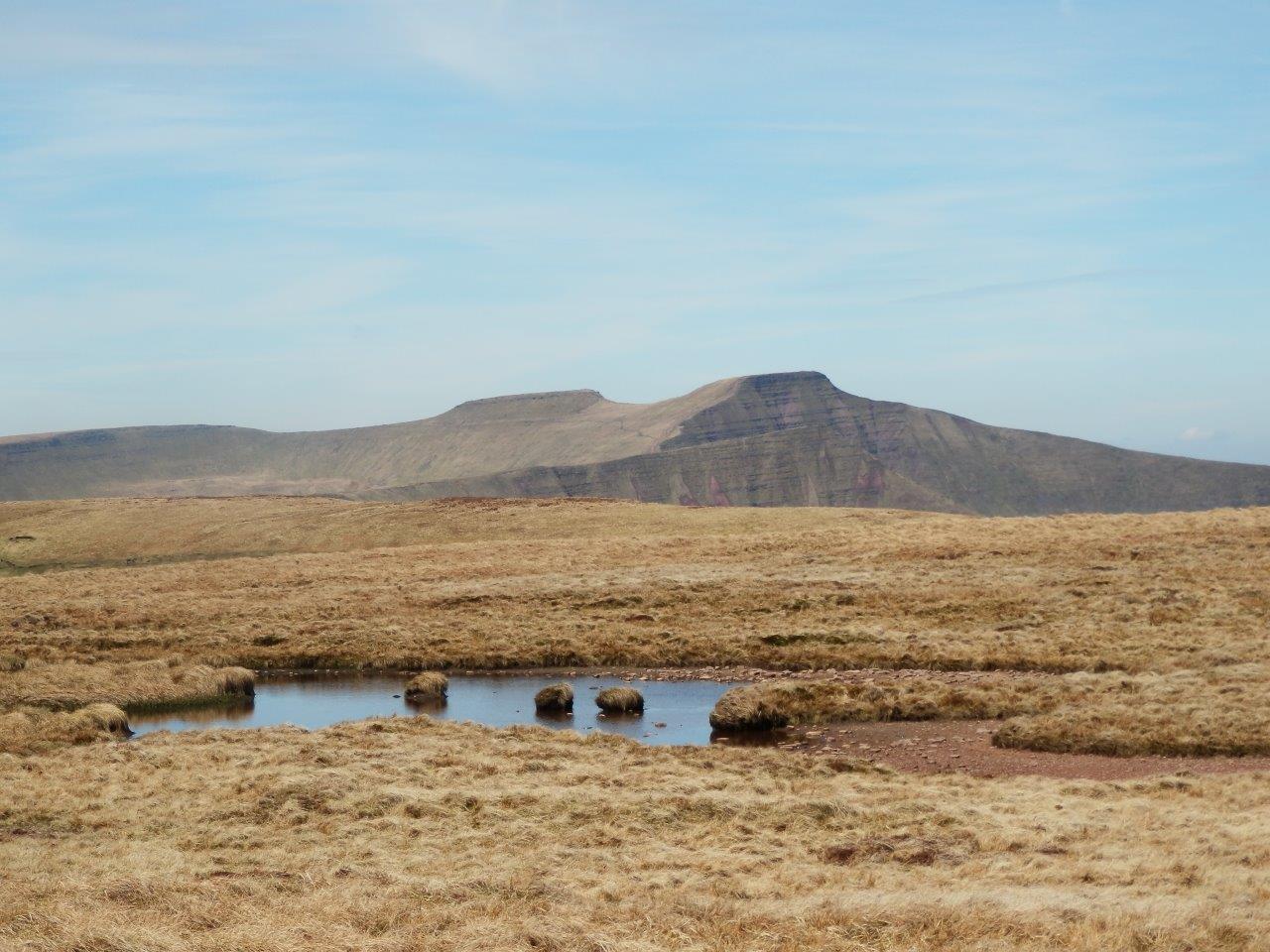 The best night’s sleep so far, and in a dorm to myself, following a half-rest day and a decent feed should have all meant that I would feel up to today’s walk. With today’s walk one of the toughest days for a while, I deliberately managed the preceding couple of days’ walks so as to leave me feeling as fresh as possible for today. But even a pair of clean fresh socks couldn’t work their magic.

Part of the problem was that I’d done a sizeable chunk, and arguably the best chunk at that, of today’s walk on a previous visit. So there was not the sense of expectation and excitement that you tend to get when heading out to iconic hills you’ve never set foot on before. I went through the motions of packing and preparing for the walk rather mechanically and certainly didn’t hurry myself.

It was certainly a nice day though, and I hate to think of how I’d have got through the walk if it had been miserable. The hills were reflecting their greens, yellows and browns nicely in the clear blue of the reservoir and it was a bit like the day I left Abergavenny. Happily though, there was a bit of a breeze today – enough to provide some cooling and keep things comfortable but not enough to be a nuisance. Which was useful, as I’d be walking head-on into it.

All in all it should have been a great day – scenery-wise it certainly was – but some parts of the equation didn’t want to play.

I began the steep ascent of Allt Lwyd with leaden legs and a pack that felt pretty similar. The exact same pack that had been like a feather yesterday, yet with no change in its contents or even how it was packed. My left shin started aching first on Allt Lwyd and my right, not wanting to be left out, had a twinge on the way off Waun Rydd. I tripped over my left Pacerpole on Bwlch y Ddwyallt quickly followed by stabbing my right foot with the other.

All of these were clear signs of fatigue and at only 3 miles into the walk, so it wasn’t simply end of day weariness. No this was clearly a cumulative tiredness of the last 100 miles of hard heavy-laden walking. There had been no intimation yesterday when all felt strong and light and I wondered if the fairies had swapped my legs for someone else’s in the night.

So even on the climb onto the top of Waun Rydd, the first thoughts around stopping the walk had been building. And it wasn’t just the legs – I was also starting to tire of the process of putting one foot in front of the other and looking at similar views each day. (Incidentally, this is one reason why I only walk the South West Coast Path in one week – or less – chunks, so I don’t get bored of it).

Deep down I knew today was going to be my last day, so tried to strike a deal with my faltering carcass in which I could stop if (a) I completed today’s walk, and (b) it worked logistically for getting home and for picking it up from the same point next time. The fact that the weather is due to deteriorate from tomorrow also helped make me comfortable with that decision.

I made it to the top of Allt Lwyd after 2 hours of grind, another hour saw me on Waun Rydd and the familiar sight of Pen y Fan hove into view under a cerulean sky. The inspiration of the view couldn’t fix my legs but it did help me find the grit to finish the walk. With jelly legs and shaky knees I made it around Craig Cwareli and was then into the previously trodden territory. It wasn’t much ascent onto Fan y Big (and innuendo queen @wellycath would never forgive me if I didn’t visit it), so up I went, crashing out at the top for a lunch stop overlooking the majestic view of Pen y Fan and Cribyn.

Kneew again on the descent and I decided to forego the delights of Cribyn, having bagged it on a previous visit, and saving myself 600 feet of ascent. Instead I took the path that contours around to the next col. This also gave me a welcome opportunity to top up with stream water.

No such luck with Pen y Fan though – it’s one of the official Cambrian Way checkpoints so I had to slog up to the top. Being a bank holiday it was pretty crowded (more people than I’d seen on all of the other hills put together) and I couldn’t wait to get off. Corn Du was knocked off pretty quickly and then I set off for my second attempt at Y Gyrn, having failed on my first attempt. A faint path curving first down and then gently up took me to a lumpy area crossed by walls and fences, but I still couldn’t find a cairn, although my watch showed me to be at the right altitude. I decided to leave it to Social Hiking to judge whether I was close enough to register it as a bag. I made my way down to Storey Arms and slogged along the Taff Trail to the hostel, thereby closing the circle in some way as I started this walk on the Taff Trail in Cardiff. This brought a nice sense of closure to at least this section of what is still an incomplete walk.

Some musings on stopping short of the target

One thing that became really clear today was that having (initially reluctantly) cut the walk into sections, I am totally happy that was the right way to do it. I’d happily stumbled on the only way this is going to work for me. If I’m going to backpack it and carry all that camping gear, then the least I can do is let it take the amount of time it needs – the extra difficulty that the extra weight adds to what is already a challenging walk means I have to be quite conservative with my daily distances. It also shows something I was dimly aware of before, but thought was just because I hadn’t pushed to do longer walks – a week to 10 days is the point at which I seem to start tiring of a walk (mentally as well as physically).

So section hikes it is, and whereas it was a reluctant choice before, now it’s one I’m embracing happily. The pressure to do it in one as an “achievement” walk or even to knock it off in a certain number of days is gone, and I can, and should, now focus on doing at a comfortable pace that will ensure I enjoy it. And it will still “count” this way.

It’s not worth doing the walk though in 3 or 4 day chunks, so my next section is likely to be early July after I’m back from the SWCP. So that gives me plenty of time to tweak the plans for the next part – likely to see me finish the southern section to Llandovery and complete most or even all of the central section (likely stop at Dinas Mawddwy or Barmouth).

The full set of photos from the trip can be found on my Google + page.

One thought on “Cambrian Way #3: Talybont to Storey Arms (Day 9)”