I stepped off the train, made a more than usually efficient job of the pre-walk faff, and retraced my steps to the edge of the Forest to pick up the trail, after a mere six months absence. Gawd, is it really six months ? I suppose that’s better than the 5 year gap in the middle of the North Downs Way (which I really must get round to finishing sometime).

The day promised to be a hot one, and I’d made myself get out of bed early so as to get the majority of the walk done before the mercury hit its peak. It also gave me the option of extending the walk if I made good time – extra distance which I could really do with if I’m to be anywhere near ready for the 10 in 10 in 5 weeks time.

The LOOP hugs the road at the edge of the forest as it takes you north away from the bright lights of (ker-)Ching-ford. And it was on the road that the first sight of the day was to be had.

The road didn’t last long and soon after the mast-tree I turned into the forest. I love walking in woods, the trees seem to dampen the sounds of the outside world and although it often looks it, the wood is never quite still. All around are small sounds of cracking, scrabbling and rustling as the tiny residents go about their business. Out of the corner of one’s eye, a bushy tail is seen darting up a tree trunk as the crunch of leaves underfoot sounds the warning of my approach. On a warm day such as this, they’re also a godsend and provide the opportunity to bank some easy shady miles.

A thin strip of woodland brought me past the sounds of young people enjoying being outside, and the glimpses of brightly coloured tents through the trees. A couple of corners and I was at the entrance to Gillwell Park, which I never got to visit when I was actually a scout, and today would have to be content with looking at from the outside.

A short while later I was climbing gently up to Barn Hill, as the reservoirs of the Lee Valley came into view below.

A descent to valley level and then skirting the top of King George V reservoir, brought me shortly to Enfield Lock, and the relative calm and tranquility of the canal.

I made the most of the calm of the canalside, before plunging into the most built-up section of the walk. Skirting school fields, a cemetery and a swing park, I slipped though the urban sprawl to Turkey Street and on to recover the rural again. Within a couple of miles I was back in woodland, and better still was following a stream, the Turkey Brook.

Of course I wasn’t alone, and it seemed like every dog in north London was being exercised this morning, and specifically to irritate a non-dog lover. And I noticed that the locals’ hound of choice tended mainly towards the small ugly mean bastard type of dog. There were relatively few cute fluffy dogs about, presumably because they’d been eaten by the meaner dogs who seemed to rule this patch. I fought my way past the maelstrom of dogs, and put some distance between them and me. 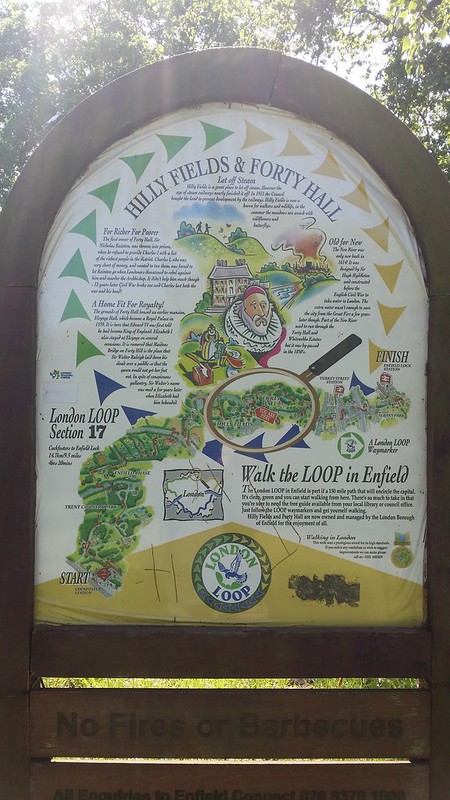 Now began a favourite part of this walk. I emerged from the wood into a field of buttercups, odd trees dotted about in the sea of yellow. The sky was blue, the sun was shining and civilization felt suitably removed and distant.

Now I’ve thought a few times about the wild camping possibilities on this trail, with discretion and subtlety very much the modus operandi. So I didn’t expect to come across a bright yellow tent parked right next to the path. Especially at lunchtime in summer. I could see why they’d chosen here though – this stretch of path seemed to be quite deserted and even overgrown in places . But I can’t say I’d have done it.

I approached the road, an obelisk rising into the sky ahead of me. Too far back from the road to investigate, I continued on my way and followed a curving path through the woods on the other side. I emerged into another country park, a few Enfielders taking the air. I looked to my right and saw the obelisk again, a ride cut through the trees so it stood out against the sky. But now it was too far and uphill, so I didn’t bother investigating.

I approached a small cottage serving as the park shop, which happily still had some ice creams left, and partook of their wares while I took five minutes on a conveniently arranged bench. Around me the locals were spread out lining the access road, as if there were a procession along it. Twenty feet back where wide open rolling grassland started, and there was nobody. Clearly that’s where the wolves and bears must be, then. I followed the access road to the edge of the park and walked down to Cockfosters station. My left shin aching for the last mile told me that there wasn’t going to be an extension today, and I contented myself with a mere 13 miles, but still longer than I’ve walked in one go for 3 months.

I really enjoyed this walk, which was sorely needed after what has felt like far too long cooped up. All 3 sections of the London LOOP so far have been great, and if anything each one seems to get better than the one before.