Planning for this year’s section really began whilst we were still on last year’s walk – abandoning the last day gave the opportunity to start this year’s walk with a two night stay in Falmouth. The sense of this approach was easy to see, and the difficulty of finding accommodation for the following night led to a closer scrutiny of bus routes for inland options. Ultimately, we played this card heavily and we ended up staying in 3 places for two nights each plus one for one night. Buses and ferries linked us back to the accommodation each night. This also meant that on three days we could travel light and leave most of the baggage train in the B&B. So successful was this approach, that we have already agreed to do the same in 2015 – and indeed to take it a stage further and attempt to do the whole section as a series of day walks based on accommodation in Penzance.

The walk then broke down reasonably well into daily distances constrained by where bus routes came close to the coast, with 8-11 miles a day most days and just one that would work out to 14 miles. We also took advantage of the Two Together Railcard introduced earlier this year, which saved more than it cost even taking into account Dad would have got a Senior Railcard discount anyway. This also means that if we revert to the usual May/June timing next year we’ll get a second trip out of the card.

The train journey consisted a lot of the same fellow walking up and down the carriage a lot, each time barging my Dad’s shoulder, and those of other passengers with an enormous bag, that only resolved itself when I remarked loudly to the carriage how easy it would be for that man to trip over when he wasn’t looking where he was going. The branch line train to Falmouth was heaving, but the journey was mercifully short. We walked a short distance up the hill from the station to our B&B. A quick check-in and ten minutes later we were out walking.

The plan was to snap off the town section of the walk, which was to be done in reverse (or technically forwards as we’re doing the SWCP backwards anyway) and combined with the hunting down of somewhere for dinner. The top of the hill was reached in a few moments and then we headed down to the seafront by Gyllynvase Beach, and walked along to Pendennis Point. On the way we reminded ourselves of the views over to St Mawes (tomorrow’s destination) and the activity of the vessels in Carrick Roads. There being a family interest in ships and naval matters, we attempted to identify the two Fleet Auxilliary vessels in harbour – which turned out to be Argus (which always seems to be in port every time I come to Falmouth) and Mounts Bay, the namesake of where this year’s walk would end.

We spent a few moments looking out at Pendennis Point, including some time watching the town youth tombstoning below us. Then dinner took priority.

We walked past The Ship, where we’d had such a surprisingly good lunch last year, but now was gearing up for Saturday night – having remarked that it was clearly a sailors’ pub last year, this wasn’t the night to reacquaint ourselves with its charms. We checked out the other places – seafood restaurants (out of bounds for a meat and two veg bloke like my Dad), and a disturbing number of pubs that invited you to bring your own food (which basically meant takeaway fish and chips or a pasty). Drawing a blank on most counts, I luckily spotted Wetherspoons, and the deal was done.

A pleasant pint of Doom Bar was  soon on its way down my neck. The fish and chips that we ended up ordering (having walked past countless dedicated establishments!!) was very disappointing – my fish looked like it had been fried twice and Dad counted (yes actually counted, there were so few of them) his chips as 16 in number. Unfortunately for Wetherspoons’ profits the manager made the mistake of asking how everything was and Dad, an ardent Wetherspoons fan, lost no time in providing feedback. The net result of this was a refund of the entire bill and a round of free drinks. This had two big pluses in my book – a second pint of Doom Bar, and better still it had been my turn to pay. It did, however, set a dangerous precedent for the week and I was unsure we could maintain this level of freeloading.

Another fine day and we headed down through the town to pick up some lunch (not easy on a Sunday when most shops don’t open until 10 or later), and grab the ferry. We’d had some discussion last night about whether to do today’s section forwards or backwards – one way allowed us to get the earliest possible ferry but constrained us to two hour time slots for the bus back; the other meant a later start but a more flexible finish time due to the greater frequency of ferries than buses. We opted for the later start so that the walk could take as long as it needed.

We embarked on the ferry and enjoyed the sights of the harbour and Carrick Roads as we headed for St Mawes.

Some time to kill in St Mawes, and then we were on the bus heading back to last year’s bail out point at Trewithian. Luckily I recognised it and we got off at the right point and were soon heading down the lane that led to the coast path

A sloping grassy field to cross and then we were back on the cliffs, tucking into what would become a familiar diet of walking between hedgerows and along field boundaries.

We reached the Coast Watch station and looked forward to Portscatho ahead.

We didn’t stop long in Portscatho – for one there’s not much there, and secondly we thoroughly looked it over last year – so were soon back on the cliffs heading for St Anthony’s Head. On the way we 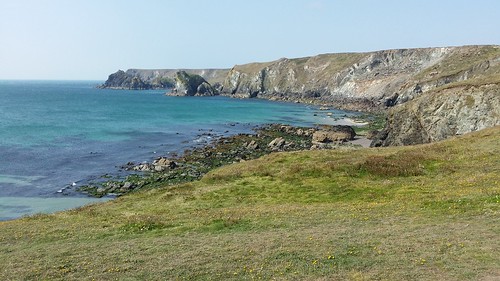