Cooped up at home for the last couple of weeks supervising builders, I was desperate to get out. I’d been lucky that my two weeks of being out of circulation had coincided with some miserable weather, but I could actually feel the modicum of hill fitness gained in my legs in the Lakes seeping away. It was time for a walk.

Another thing was pushing me to get out for this walk – I started on the LOOP on 26 October last year, and now being just two walks from finishing it, the desire to complete it inside the one year mark was growing. With Hurricane Gonzalo hitting on Tuesday and the back end of the week filling up with other things, it didn’t leave many opportunities.

So an early Monday morning start it was and I found myself walking over London Bridge at sunrise, fighting my way through the six-abreast waves of commuters coming towards me. I always seem to be going against the flow wherever I go in London. It’s a bit like trying to swim uphill. 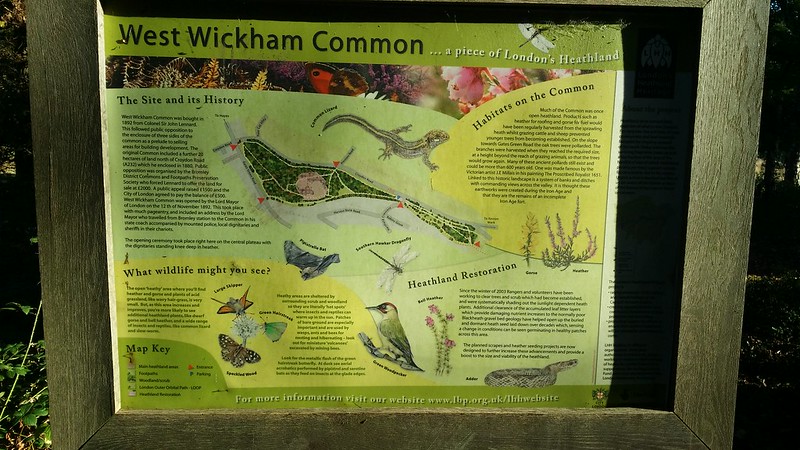 I arrived in Hayes and retraced my steps from last time to the edge of West Wickham Common where I’d left the LOOP proper. As my foot touched the grass, I encountered the first of what was to be a particularly large number of dog walkers today – this specimen being an irritating little yappy mutt that really didn’t seem to like me, and which due to a combination of my superior speed and frequent pauses to look at things meant I kept meeting up with it along the path.

A short way onto the common and there was the first distance finger post I’d seen for a while. These can give a real sense of progress around the LOOP, and what particularly stood out on this one was the “Erith 24¾ m”. Too far to do in a single day, I was nevertheless a mere two sections from the end of the LOOP.  I’ve enjoyed the LOOP immensely, and far more than I ever thought I would, but I am now itching to move onto the next project and have the sense that the best bits of the LOOP are already behind me.

West Wickham Common became Hayes Common and as I skirted the southern fringe, I had the feeling that beyond the busy A road that runs through it lay an area worth exploring – maybe even that would yield camping opportunities. 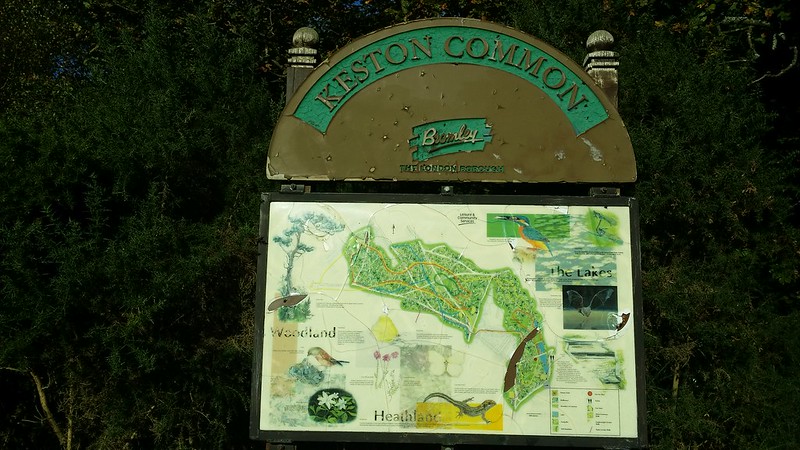 I came out onto the road just before Keston and briefly toyed with the idea of a second breakfast at a conveniently sited café. Fighting the urge, I carried on along a side road which became a track and then Keston Common. I dawdled by the lakes but still missing the point where I should cross over to the other side – the first of several problems with the waymarking I’d find today.

Another A road to cross and then I was walking along a fenced path that brought me to a stone bench, a sign and some old trees. A closer look at the sign revealed another of the historical gems that are to be found along the LOOP. This was the spot that William Wilberforce and William Pitt the Younger debated the slave trade and decided Wilberforce to push for its abolition. Over to the right of the path, the remains of the oak lie fenced off.

Now the countryside on either side of the path started to open out, and I was getting views back up to Holwood House, Pitt’s former home. I stopped at Holwood Farm to enjoy the noises being made by a load of ducks and geese right next to the path and then carried on.

Across a road and along field edges brought me out the end of the charmingly named Bogey Lane.

I crossed another road and was then on today’s golf course. The LOOP took me through the car park and into the High Elms Estate, bought by the London Borough of Bromley in 1965 and which promptly burned down 2 years later. All that remains are some bits of brick mapping out the house floorplan and the Clockhouse.

Over by the Clockhouse, I stopped to take a picture of a concrete wall, which is actually a Fives court, and then continued down the drive. On the other side of a road I climbed up onto more open land and found a bench to pause and have a cup of tea.

Various dogs and their attendants rocked up, causing varying levels of irritation with two particularly interested in finding out if I was carrying any food. Back on my feet I climbed gently upwards across the park towards the church in the distance marking the edge of Farnborough. Another dog came right up to me, snarling and growling and nipping at my heels. Telling it to “eff off” didn’t seem to work much, so I transferred that advice to its owners. I’m getting utterly sick of canines coming up to me and taking unprovoked umbrage at my presence. Having been attacked by a dog a couple of years ago in similar circumstances, my tolerance for such encounters has become absolutely zero. It is telling though, how this NEVER happens when out in the hills.

The church itself was quite nice when I got to it, and tranquillity returned, albeit briefly as the next thing was a bit of urban walking that was mercifully short and brought me out at the bottom corner of a sloping field.

I made my way up to the top corner and through the trees to a meeting of paths at the edge of Darrick Wood. A waymark signing the LOOP as left I somehow only vaguely paid attention to and went sort of half left, half straight on. After a few hundred metres it didn’t feel right and the fact I was heading west compared with north as on the map didn’t help. I looked for signs that the LOOP would curve around to the right but found none. Eventually I could see (and hear) through the trees a school and a simple look at the map showed this to be far off to the left of the actual LOOP route.

I retraced my steps back to the other side of Darrick Wood and there inspected the waymark again. It was clearly pointing south – a mere 180 degrees from what the map shows. Recent experience of waymarks versus the map, meant here I went with the map. It brought me out on the exact residential street I needed to be on. Goodness knows how a southerly course would have brought me here. There’s something clearly wrong with the waymarking in Darrick Wood. It may be one of those things where it works ok if you’re following the LOOP clockwise, but it certainly doesn’t going anti-clockwise.

Several streets later and I was back on wood and heathland, more waymarking proving dodgy, but common sense making it clear what to do. It also helped that I was wearing a new clip-on compass, which meant that I looked at it a lot more often than I would usually. Today was definitely a day when good old map and compass came to the rescue.

Crofton Heath finished with, and another set of residential streets to walk before I got to Jubilee Park and stopped on the first bench I spotted for lunch.

I probably didn’t see enough of Jubilee Park to form a proper judgement but it wasn’t one of the better country parks I’ve visited on the LOOP – not helped by another waymarking problem. Seeing a mark pointing up right, I followed the path and found myself in a car park and what was obviously the link to Petts Wood station. The map got me back to the footbridge needed to cross the railway.

Two more railway crossings later and I was next to the Kyd Brook, increasing the sense that I was nudging towards more familiar territory, if only in terms of the place names. Into Petts Wood, more dogs not liking me, some churned up paths, and then I was nearing Chislehurst.

The other side of the A208, Park Wood, was busier but no less problematic for staying on the LOOP. I successfully found the right turn to parallel the road, but then saw no sign of the left that would take me deeper into the wood. I suspected I’d reached the turnoff when I saw an obvious path on the left, but no waymark meant I continued until the point I knew I’d gone to far, when the trees on the left thinned out and I could see the open ground marked on the map.

It wasn’t difficult to get back to where I needed to be though, especially as I suspected what was happening all along. A very meagre set of waymarks somehow got me through the wood and instinct and the noise of the A20 somehow made me take the correct path choices to come out in exactly the right place at the junction of the A20 and A224.

Now I didn’t need the map as I knew where I was. I crossed the A20 and walked down towards Sidcup Place, scene of a number of family meals out with the in-laws (or, as I like to call them, the “outlaws” <<see what I did there).

Sidcup was where I’d aimed for today as it broke the final 25 miles of LOOP into sensible chunks, giving me a slightly shorter walk for next time when I’ll finish it. But rather than head straight along the road for the station, I headed left around the back of Sidcup Place to visit an important landmark – the signpost where I’d first become properly aware of the London LOOP, on one of those family outings.

Homage paid to the sign, I gambolled down to the High Street and then on down to the station. With the choice of an ok arrival time back home or bagging some brownie points by popping in to see the outlaws, I opted for the latter and headed on past the station and the church where I was married to their place.