I mulled over for ages trying to come up with a witty title for this post, but nothing seemed to work, so I’ve stuck with the factual.

The goal of this walk was actually quite simple – to walk from Erith, where I finished the London LOOP earlier this week, to Gravesend, where I start the next path – the Saxon Shore Way. I’m going to see if I can do this at the end of each of the local(ish) paths that I will be working my way through when I can’t get to the hills. Or at least for as long as I can be bothered to keep it up without getting silly.

Anyway, I needed to craft a route that covered the roughly 13 miles from Erith to Gravesend (based on the most direct route I mapped out, it’s a bit less as the crow flies). The direct route didn’t appeal as once past the QE2 Bridge, it was mainly industrial estates. A route that went to more interesting places was called for.

This meant a longer route then, and sufficiently so that I struggled to plan something that could be done in a day. I even toyed with the idea of immediately breaking the rules and not starting from Erith, telling myself that any point in the LOOP would count. Even so, that only saved 2-3 miles on a route that was looking at least 16-17.

The other factor that influenced planning was my desperation for a camp, it having been a month since my last one, and with a new tent I wanted to sleep in for the first time. Initial thoughts of a sneaky bivvy somewhere en route, for which I probably wouldn’t use the Hexpeak, were discarded in favour of a campsite option. This did have the problem of elongating the route considerably, with the total distance actually walked nudging 30 miles, compared with the 13 miles I was actually trying to travel overall. In hindsight, this was probably a bit more than I really should have done.

A call was made the night before to book the campsite at Badgells Wood, a place I’ve camped a couple of times before – most recently for the Offical Annual Birthday Camp back in June. So I knew what I was getting, and it’s about as wild a camp as it’s possible to get on a dedicated site. It would do.

So I ended up with a plan for a two day backpack, the first day being the bulk of the walk from Erith to the campsite on the North Downs, the second being a much shorter walk north into Gravesend – an area I’ve walked plenty of times and could make up as I went.

With the plan for the walk and all of the prep only having been done late the night before, my mind was still buzzing with it all, and I didn’t sleep well, eventually giving up just before 6am and taking the opportunity to get an early start. With sunset just after 4:30pm, I really wanted to get the walk done by then if I could, especially as I’d be camping in woods which would kill the light very quickly.

An early start achieved, I was walking just after 8am, after having to travel into and back out of London. The first 3 miles were uninspiring as I made a beeline for Dartford Heath with the aim of getting south of the A2 as early as possible. That meant road walking, and plenty of it. I didn’t stop until my foot stepped onto the heath. 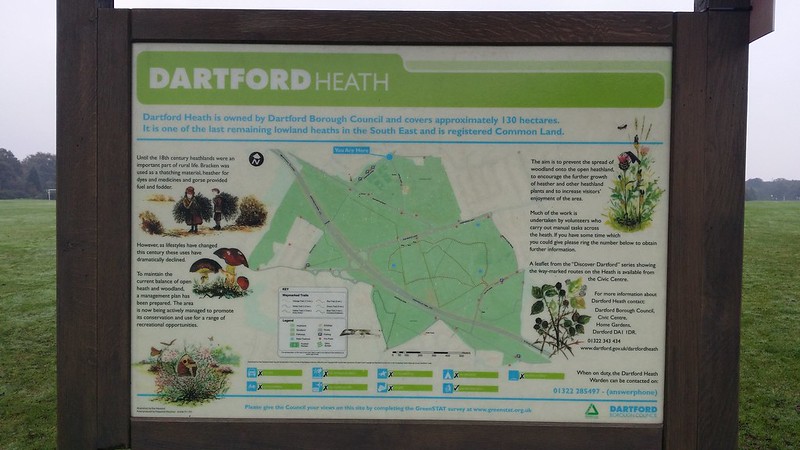 It wasn’t that inspiring, at least compared with some of the commons, heaths and parks I encountered on the LOOP, but it was to be about the best that could be hoped for today.
I crossed the A2, skirted Wilmington, and encountered two of the biggest, meanest and angriest dogs I’ve ever seen. Luckily they were safely behind 8ft gates, but I could still hear them throwing abuse at me half a mile away, as I headed down the first of several byways that today’s route would take in. I’d chosen this particular segment of the route in the hope of bagging the trig on Row Hill, but when I got there, I couldn’t see an obvious way up to the summit without trespass through gardens, so gave it up. Today’s Social Hiking map would have to stay devoid of bagged peaks. 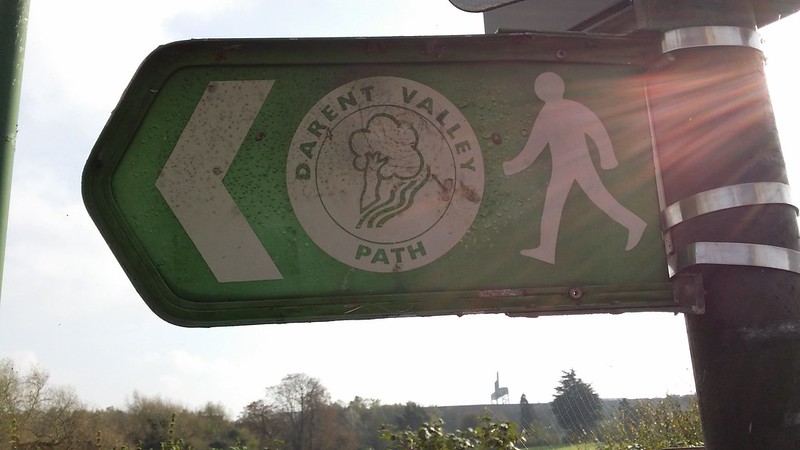 I passed through Hextable and crossed fields to Hawley to join the Darent Valley Path for a very short stretch, which was just enough to get me the other side of the M25. I climbed up from Darenth to Lane End starting to tire having knocked out 9 miles in 3½ hours. A bit early for lunch, but I was ready for a rest, and a chip shop provided the justification before what was to be a boring and sloggy bit of the walk.

Now it was roadside walking, as having done 9 miles the map looked like I still had the same again to walk, and I wanted to get it done as directly as possible. The road offered the best opportunity to substantially increase my eastwards progress in a sensible time. I could have continued past Longfield all the way to Meopham, but I craved the fields, so cut down around to the south of Hartley. A series of zig zags alternating between roads and fields got me finally to South Street.

As I crossed the A227, I knew I was nearly there – for most of the afternoon simply getting to the A227 had been the only thing I was focussing on. Legs were tiring and feet were starting to smart a bit on what was now the longest walk with a full pack I’d done for several months. The A227 also represented the entry into terra cognita. 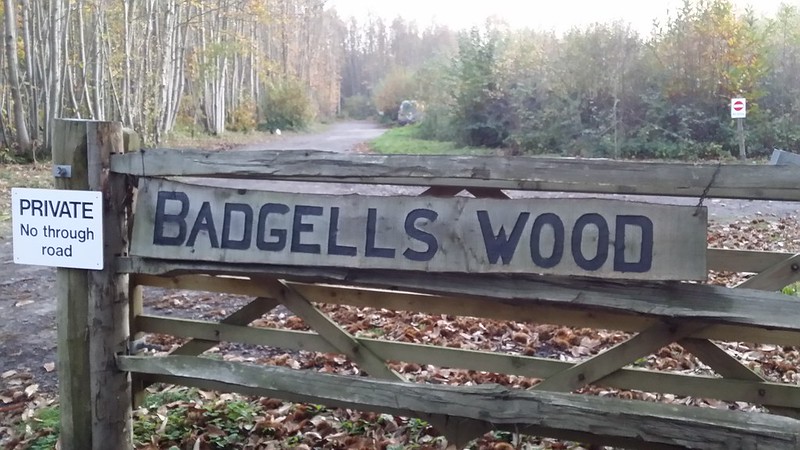 From South Street, I took to the byways that run to the east of the A227 and down behind my old scout camp. Conscious that I had less than an hour until sunset, I made fast progress, reached the end of the byways and now just had a couple of fields and a stretch of road to the campsite. With relief, I arrived at the site 15 minutes before sunset, checked in, bought a bottle of water and headed off to find a pitch. In failing light, this is where past experience of this place really helped. I found my way quickly through the wood to the clearing I was aiming for, and started putting Matilda up. I just had time to take a couple of snaps before darkness fell completely.

Whilst it was great to finally spend a night in Matilda, it must rank as one of the most boring camps ever. With dark hitting before 5pm, there was simply too much evening to get through before it was worth turning in. I didn’t fancy a 3 mile round trip to the pub – not after walking just short of 20 miles already that day – and I’d neglected to bring my scotch. With an uneaten packed lunch from earlier, I didn’t even have much cooking to do. The evening was spent flicking through social media on my phone and listening to the sounds of the woods around me – a constant litany of stuff falling from trees, and stuff moving through the trees, underpinned by the distant roar of the M25 and occasional loud plane noises directly overhead. I turned in as early as I could.

Despite a 6am wake up, it was a slow start – partly due to residual tiredness from the day before, and partly because I didn’t have the schedule challenges today. And almost every step was on familiar terrain to some extent.

I packed up and had breakfast and did a couple of things I’d previously meant to do to Matilda last time I pitched her in the garden – swapped the cord on the back corner of the inner to an orange one, to match the guying on the flysheet (thereby making it obvious which corners go where for a fast pitch); and measured up for some additional guylines, making up one and testing it with a view to doing the rest at home.

I slipped out of the campsite, and walked a short way along the road to the bridleway that runs below Holly Hill. Diverting off this to climb to the top, I quickly reached the trig and spent a few moments there.

Back down on the road, I headed north for Great Buckland to pick up the Wealdway that I would follow all the rest of the walk. My legs felt sluggish and the WW offered an easy and relatively direct route that I’ve used before as the fast way to get down to the North Downs.

The Wealdway climbed gently across the Bowling Alley valley, in the summer it’s quite a sight when the poppies are out, but today was stubble and cows that didn’t seem particularly pleased to see me – one of them starting a run towards me. In the next field the farmer was ploughing, pursued by crows and gulls swooping on the newly tilled earth for any morsels thrown up to the surface.

I descended into Luddesdown, one of the most picturesque places on the North Downs. A climb up onto Henley Down and a part of this route that hasn’t really registered with me before – usually I’m doing it the other way and it coincides with me just getting a move on. But today with tired legs and in no particular hurry on what was a glorious day, it felt like new terrain.

The WW brought me around Camer Park into Sole Street and I was now at that point that the walk was so familiar that no amount of tricking myself over how far was still left to go would work. The fields took me to the A2 and the Channel Tunnel Rail Link with my pace slowing more and more – I’d be glad when this walk was done.

All I had left now was the 2 mile walk down the A227 into the centre of town, past the end of the road where I lived as a baby, the park I played in as a kid, the office I did work experience in. My home town. A place I appreciate a lot more now I don’t live there than when I did. I got to the ferry, called my wife for a lift from the other side and crossed the river, glad the walk was done.