Having been spoilt by a couple of days of great weather and some delightful colours on the fells, the forecast for today wasn’t looking so good – clearly I’ve used up my quota of decent conditions.  Either that or nature has decided that as it is now December, it ought to get on with winter properly.

So it’s more like business as usual, and last night when I thought about what walk to do today I didn’t have the sort of head-mangling choice to make as yesterday turned out to be. I’d simply do the least inspiring of the two remaining walks I have planned. That means  today it’s the trek over to pick off my final Far Eastern Fell – Troutbeck Tongue – a fell which has steadfastly refused to fit neatly into any other walk. I just hope it’s worthy of a walk in its sole honour.

It’s what I call a “blank” day as I start off – a sky that’s almost completely devoid of features, other than a thick coating of grey. No nice colours, no sexy light, it’s just dreary. I trudge through Ambleside to get the walk started and immediately go wrong before I’ve even left the town – it’s so easy to end up heading up the Kirkstone Road if you’re not paying attention. I retrace my steps and instead head up alongside Stockghyll Force, detouring through the woods to see the waterfalls themselves.

I walk along the road for a bit until I come to the path that heads straight up the side of Wansfell, and begin crawling up the side of the hill. I encounter 3 youngsters on their way down – the only people I will see on the fells all day. Everything gets greyer and more dreary as I gain height, and at the summit of Wansfell Pike it’s also cold. It’s not a day to linger. The sketch pad and paints have been left behind today.

Along the ridge I go, memory recalling that it’s longer than it seems on the map with all of the undulations. I undulate my way along, climbing those hummocks that appear to correlate with something worth bagging, but not really sure until I can get a good look at my track afterwards. Cairns on a couple of them help give some confidence that I’ve got the right ones though.

I continue north along the ridge to descend over Ide Hill. Somewhere off to the right is my main objective, but for now it’s obscured by one of the ridges sweeping down from Caudale Moor. A boggy thwack down over the sodden hillside gets me to the road where I clamber over the wall and make use of the firmer footing for a short while.

Now a rather dull adventure starts to become a bit more intrepid, as the lay of the land compared with the map throws up some challenges. I can see where I want to get to on the side of the Tongue, but want to cut across country to get there rather than descend all the way to the valley floor.

Several walls lie in my way – the first is straightforward, the second even more so. The third only comes after the crossing of Woundale Beck, which isn’t that straightforward. My first attempt, trying to maintain dry feet, ends with me ignominiously sprawling on a flat rock in the middle of the stream. My second is a simpler matter of two wet steps through the beck itself.

The next wall looked easy from my earlier recce point, but it’s just that little too high for comfort and with insubstantial places to get a decent foothold. I risk ditching my pack and pacerpoles on the other side and inch my way over and down the long drop on the other side.

A descent through bracken, reeds and general scrub brings me to the Troutbeck and I now just have to follow it upstream to the footbridge which should be there.

From the other side of the beck, I look up through the sparse trees to the upper part of the Tongue – it’s to be another steep pull. Some zigging and zagging is employed, I’m lucky with my fence crossing points and shortly I’m puffing up over the final outcrops to the summit and the cairn. Lunchtime. I hunker down as far out of the wind as I can get and get a brew out.

Lunch is short as it’s cold, it’s not especially inspiring around me, and I also want to be done before sunset. I head down the nose of the fell through Troutbeck Park, to pick up the track and then road that takes me into the teeming metropolis of Troutbeck. I opt for the Robin Lane route that takes me through loads of places with Skelghyll in the name and which brings me within sight of the outskirts of Ambleside. I make it into down just as it’s getting dark.

As tomorrow evening is a meetup with Gina and Dave, this forces me to hold the ancient tradition (well since the start of 2014) of the final night curry tonight instead. And a fine one it is too, even if I’m the only customer in the restaurant. 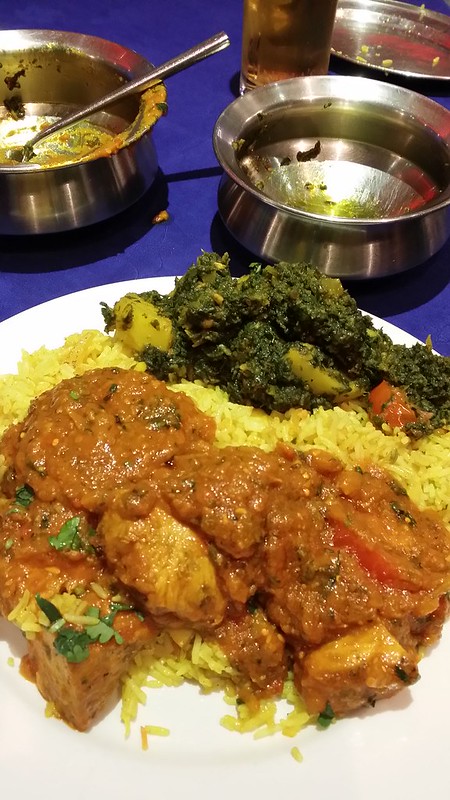