In my last post, I introduced the idea of the hillplodder.com awards aka The Ploddies. It’s now time to get down to business and look at the things and experiences that have made the year and are worthy of special mention. I was going to do this as a list of awards, but have changed my mind and am simply going to incorporate them into the review of the year.

2014 has been a year like no other, whether I measure it by number of trips, number of walks, number of peaks visited, variety of walks undertaken…the list could go on. What is certain is that it has been a very full year and a very diverse year.

In total (not including the more routine urban walks), I have walked 633 miles, climbed 33,916m and bagged 193 peaks on Social Hiking. This was my first full year of using Social Hiking, having started in spring 2013, and I’ve found that using it has spurred me on to do some walks I might not have bothered with. Specifically, I’ve done some walks purely because certain peaks show on the map as not yet visited and I simply wanted to turn them red.

My walking year usually starts slowly and January is normally a month of a handful of local walks, if that. So this year was a bit of a turn up for the books. Work arrangements meant that I covered the working days around Christmas and had those around New Year off instead. This gave me the opportunity for a New Year trip to the Lakes with Cath, our original plan of some wildcamping ruled out by weather conditions that would have made for some long miserable nights which we weren’t prepared to endure. So we youth hostelled instead, spending 3 nights at YHA Ambleside. With what looked like a tough January of work ahead of me this was mostly about getting out rather than picking off particular fells. So we stayed fairly local to Ambleside, with a walk over Loughrigg where swans chased us from our planned lunch stop on the shore of Rydal Water, and the Scotch we drank made me pretty rubbish at walking during the rest of the afternoon. We did visit a favourite tarn (Alcock) just beating sunset.

The second day was a foray up Scandale to visit the eponymous tarn and to pick off a couple of new Wainwrights for Cath, and one for me. A good trip and just what was needed to set me up for the coming work stint.

I then spent much of the rest of the month working in Edinburgh, the only walk of note being the day I got up extra early to do a sunrise walk around Arthur’s Seat.

February was the month of frustration and started with a planned meetup with Stuart (@Lonewalker) coinciding with a terrible forecast. I still travelled up anyway, but our planned overnight chunk of Pennine Way was shelved in favour of a more sensible plan. A daywalk on Bleaklow then ensued, ascending by the Doctor’s Gate path and down over Cock Hill. This walk exposed me to a side of Bleaklow I hadn’t really seen before, but for Stuart the most memorable bit was probably when I slipped on duck boards, landing heavily and letting our a classic Wilhelm Scream. The horizontal sleet was also “fun”.

Two weeks later, wind stranded me in Edinburgh, despite being within a few miles of home at one point on the journey (vertically). We got almost to London, found we couldn’t land and nowhere else would take us, so ended up back in Edinburgh, which for me meant the hotel opposite the office. It effectively took me 5 hours and 600 miles just to cross the street. This was unfortunate but I salvaged something from the enforced weekend in Edinburgh. A walk out to Corstorphine Hill, which I’d wanted to climb for a while.

March came and more plans got disrupted. Some challenges at work meant the planned Lakes trip on the first weekend had to be moved, but this turned out well as the weather was much better the following weekend. Cath and I met up with her friends Sarah and John to climb Great Mell Fell together, before Cath and I continued on our backpack towards Little Mell Fell. A great summit camp on Little Mell was rewarded with a nice sunrise and a view of Helvellyn sprinkled in the last of the snow. I think was was one of Cath’s favourite camps of the year, but for me even better was to come.

Sadly Cath only stayed one night on that trip, and because of that missed the best bit. I took the opportunity to knock off some more Far Eastern fells with camps on Caudale Moor and at Angle Tarn.

I didn’t know it at the time, but the high camp on Caudale Moor was to be the best wild camp of the year and certainly the best sunset from camp. It was also a strong contender for sunrise of the year too. I finished the trip with an early morning climb of Place Fell, just catching the bus out of Patterdale in time.  The view of Helvellyn from Place Fell was probably the Best View of the Year. In hindsight, this trip was also the Best Backpack of the Year too.

The rest of March was about work and the best I could really do was some urban walks in London and Edinburgh. But by this point, I had my eyes set firmly on the end of the contract in May, when time for adventures would cease to be an issue.

April was hard, with the clock ticking down but nowhere near fast enough. With no opportunity for a weekend away in the hills, and with even our traditional friends and family Easter break impacted by work, the time just crawled by. There was one ray of light though.

Late in the month, I decided that my many weeks of working in Edinburgh should be capped with a wild camp. As soon as I got an opportunity with an early enough finish, I scampered back to the hotel, gathered my stuff and headed back down to Arthur’s Seat for an overnight bivvy. This was the first time I’d camped out like this. It’s not the way I like to camp, and waking just before dawn in a fug of condensation wasn’t great. The looks on my colleagues’ faces though were worth it. This camp may technically have been within the city, but nevertheless it’s my pick for Adventure of the Year. 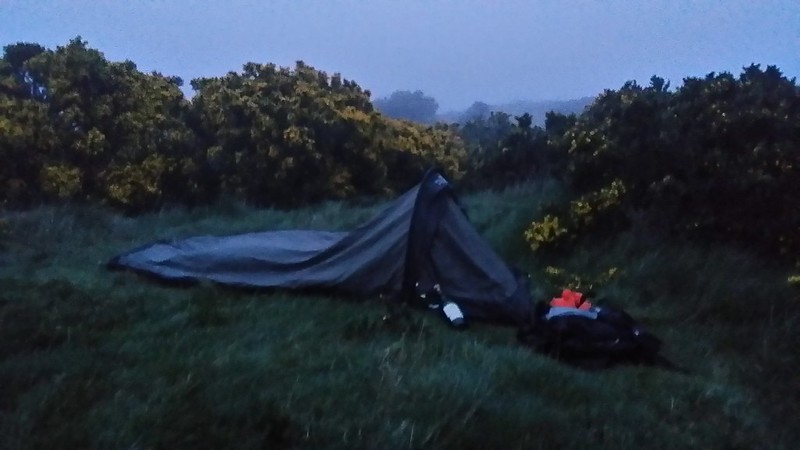 A bivvy on Arthur’s Seat on a school night

May came and the trips to Edinburgh were no more. All I had to do now was wait out the post-implementation period at the office and then I was done. This gave me the opportunity to pick up the London LOOP again which I’d started in October 2013 and not had enough weekends to make much progress on.

Apart from all of my dog-related traumas on this path, it was an absolute revelation – who’d have thought I’d find such a walk within such easy reach of home. I finished the walk up later in the year. The LOOP wins the prize for revelation or unexpected surprise of the year.

Half term arrived at last and I was free. Our postponed Easter break took place in Norfolk and didn’t add much to my ascent totals for the year. I did climb to the highest point in Norfolk, and a long daywalk chunk of the Weavers Way, which helped a little towards the looming 10-in-10 in June.

And now with work done it was time to have some fun.  First up, on the very first working day of my planned long break, I got up early and got on a commuter train into London – not from force of habit, but to do a walk. You just don’t notice how miserable people look when you’re one of them on the daily commute, but as soon as you’re doing the journey for more pleasant purposes it becomes very apparent.  That day saw another section of the LOOP completed, and one which was particularly special.

Special though this walk was, June was really about one thing – the 10-in-10 challenge: to walk 10 lake District Fells in 10 hours for MS Society UK. But before I headed to Cumbria for the challenge itself, a number of training walks needed to be done to warm me up for it.

Reasoning that the best way to warm up for a tough walk in the Lakes was to do a walk in the Lakes, I headed to the Southern Fells for a backpack of some favourite places, and some I hadn’t visited for a few years. A great first night’s solo camp on White Maiden, before I met Cath. After a night in the hostel at Coniston we then headed over the fells to a camp near Red Tarn. This walk was special because it gave a chance to revisit Grey Friar which I’d wanted to for a while, and it also brought back loads of memories of my winter backpack in the area the year before. Unfortunately the backpack fizzled out with a horribly manky day over the Crinkles, and we bailed early to a hostel.

A local walk that saw me trapped in a farmer’s field ended up being cut short as I crawled from the brambly moat around it with legs shredded by cuts and stings, wins the prize for incident of the year.

My final training walk before the challenge was an epic 25-miler walking from home to Southend, made deliberately long as I can’t build in much in the way of ascent on local walks. So much so, that this is the longest single day’s walk I’ve ever done.

I arrived in Borrowdale for the challenge in as good a shape as I could realistically be for the walk, given the months of debauchery in Edinburgh and the opportunities I’d had for training. But the 10-in-10 didn’t go quite as intended.  Falling behind with a slower section of our huge team on the very first fell, things worked themselves out quite nicely in the end. My fellow laggards either withdrew or defected to the shorter 5-in-5, leaving me alone to attempt a catch-up of the main group. I never caught them, but ended up completing the challenge at my own pace – in hindsight there’s no other way I could have made it. This is probably the Walk of the Year.

So ended the first half of the year and, despite all that working away in Edinburgh, I’d still managed to pack in more outdoors action than I sometimes achieve in a whole year. Imagine what I could do with the upcoming few months off work then…