A deadline has been pressing on me. The Late Turner exhibition at Tate Britain is due to finish this coming weekend, and I hadn’t been to see it yet, even though it had been on since September and I’ve not had work as an excuse. So I set about rectifying that.

Whilst the visit to the Tate was the headline objective for the day, I also wanted to get some exercise, and it seemed like an ideal opportunity to undertake the first of my Statue Walks, with the theme obviously being artists.

The plan for the walk was pretty easy to put together as unbelievably there aren’t that many statues of artists in London, and even when you add in adornments on buildings related to the art establishment, it still makes the number manageable. The unifying theme of art for this walk also made the locations relatively straightforward – like most major cities, such activities tend to be concentrated in certain areas.

The main challenge was that I had to go all the way to Chelsea for one particular statue, with everything else being a lot closer. Since I was walking from Fenchurch Street, that worked out at around 15 miles – a heavy day’s walk when you consider that I would also spend a few hours inside the gallery too.

Laying out all of the places I wanted to visit on the map, made the plan quite clear – given where I was starting from, the river was the key to this walk, and I’d head to Chelsea along the South Bank, cross the river and then head back initially along the north bank, then after the Tate head deeper into the city to pick off the last bits, before making my way back to Fenchurch Street. I did plot a short version too – for anyone else wanting to do this walk, the obvious start point is Charing Cross or Embankment stations, which will result in a circular walk of 9-10 miles. But then again, as all of the main statues are in the West End / Chelsea, anywhere over that way would work as a start point – however, the river adds interest towhat could otherwise be a dull trudge through streets.

I was in Town early with the more conscientious commuters and began the walk, as with so many of last year’s London LOOP sections, with a sunrise stroll across London Bridge.  Then it was along what is for me a well-trodden path on the South Bank, past the Globe and Tate Modern.

Then I came across the ITV bunch setting up for a live broadcast of the weather. 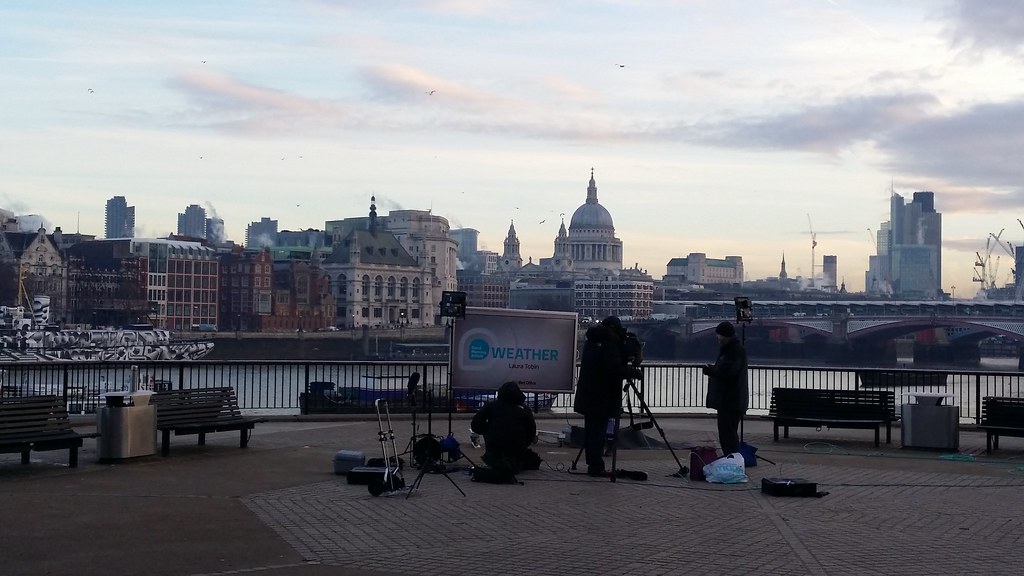 I passed under Westminster Bridge and into territory I don’t usually visit, simply because it’s at the opposite end of town to where I am. Across the river the Palace of Westminster and I remembered an article I read the day before pointing out that 20th (ie today) was 750 years to the day that Simon de Montfort called the first recognisable parliament of the commons – two representatives from each borough and shire. If you were wondering, that’s why the BBC were showing a load of democracy-themed programmes that day. 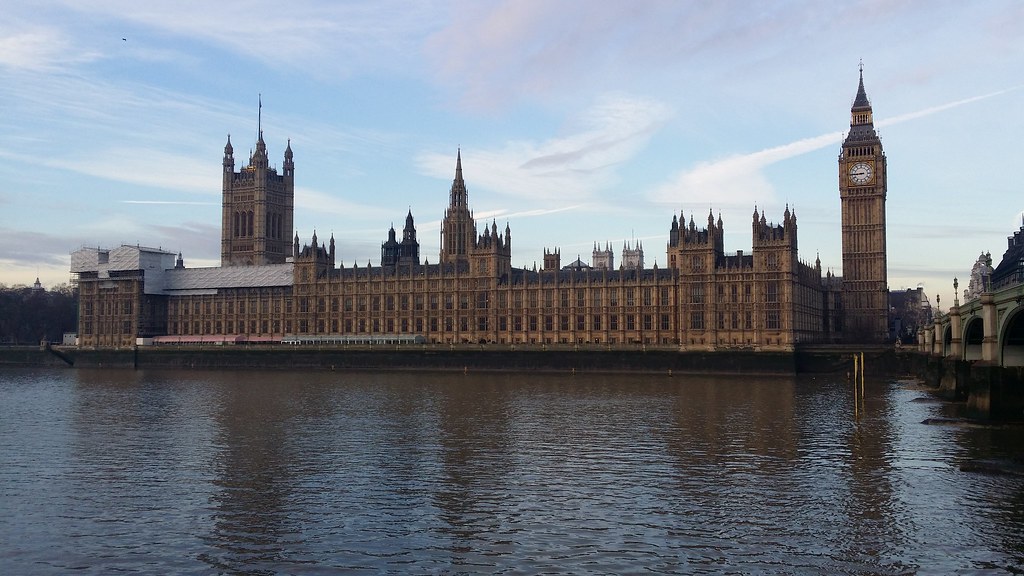 On through Lambeth and Battersea, a big detour around the power station and past the dogs’ home, to the accompaniment of much barking and wailing. The Park itself offered a few minutes relative tranquility and as I passed the lake and saw the ice on its surface, I hoped that the weather girl back downstream was going to point out how cold it was.

Also in the park, I came across the London Peace Pagoda.

Now an error was made that could have been avoided if I’d bothered to get my map out. I crossed the river using Albert Bridge instead of the next one, leaving me floundering when looking for the statue that should have been right next to it on the other bank. 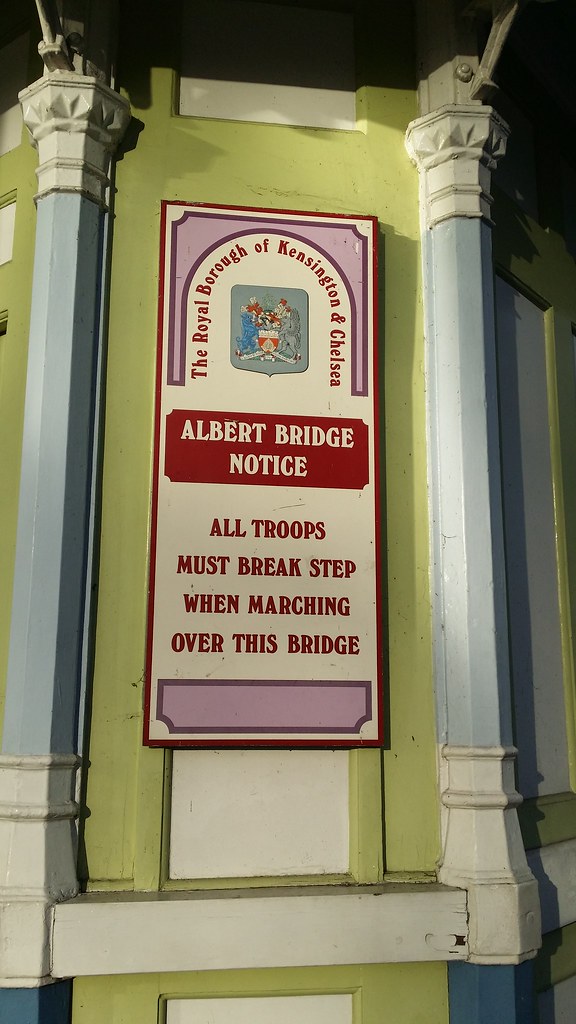 It was pretty obvious what had happened though, so I simply walked upriver to the next bridge and there was James Abbott McNeil Whistler, the first artist statue of the day, although not the first statue (having passed Laurence Olivier outside the National Theatre, and Sir Thomas More a few moments ago) 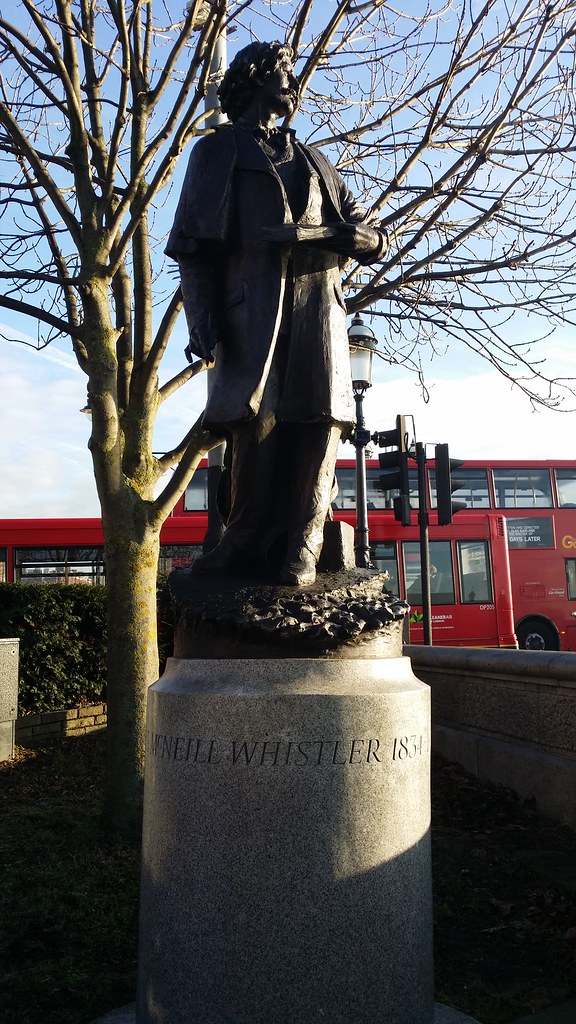 It had taken 6 miles of work to get to Whistler, making it arguably questionable about whether it was worth it, but with so few actual statues of artists to visit, it had to be done.

I retraced my steps towards the Albert Bridge, back past Sir Thomas More (one for a future category), and into the small gardens opposite Cheyne Walk. Here I found the pre-Raphaelite, Dante Gabriel Rossetti. 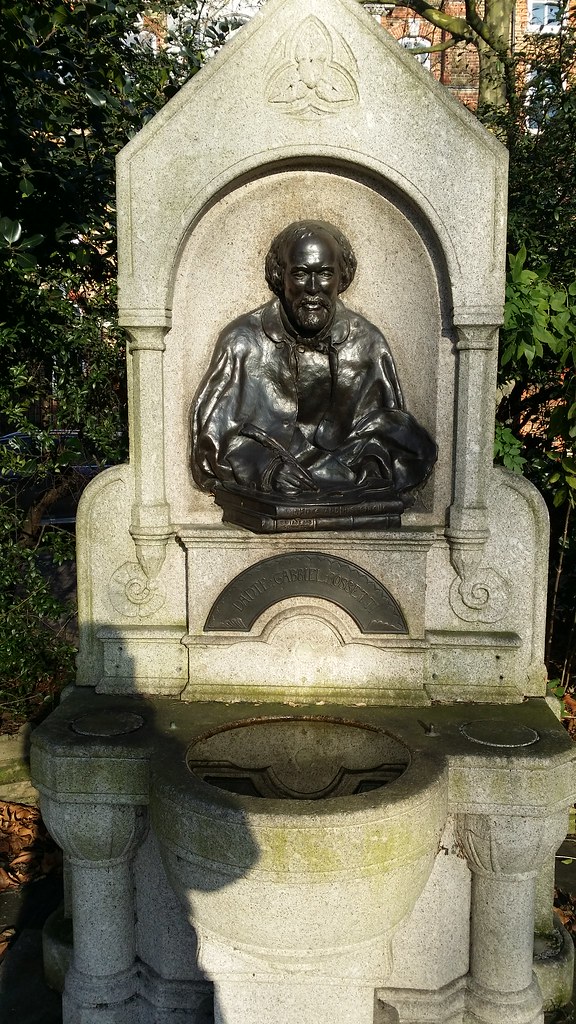 Now for a bit of a trudge up to Millbank and the Tate itself. On the way though, in Pimlico Gardens, was William Huskisson, memorably from school history lessons as the guy run over and killed by Stephenson’s Rocket. I was saving him for another day, but came upon him by surprise. Much like he probably felt when the Rocket bore down on him. 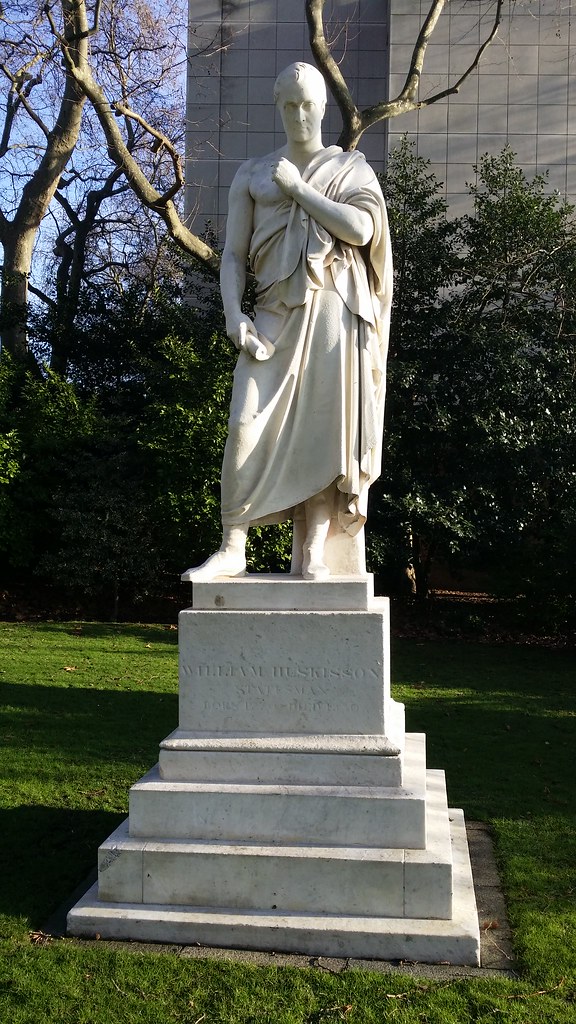 I arrived at the Tate and went in, making a huge tactical error by walking around the free galleries first, rather than booking my ticket for the paid exhibition – when I’d finished the free bit I then found I had an hour and a half’s wait. Still it was interesting navigating around the various school parties and seeing what each of the kids had decided to sit by and draw. 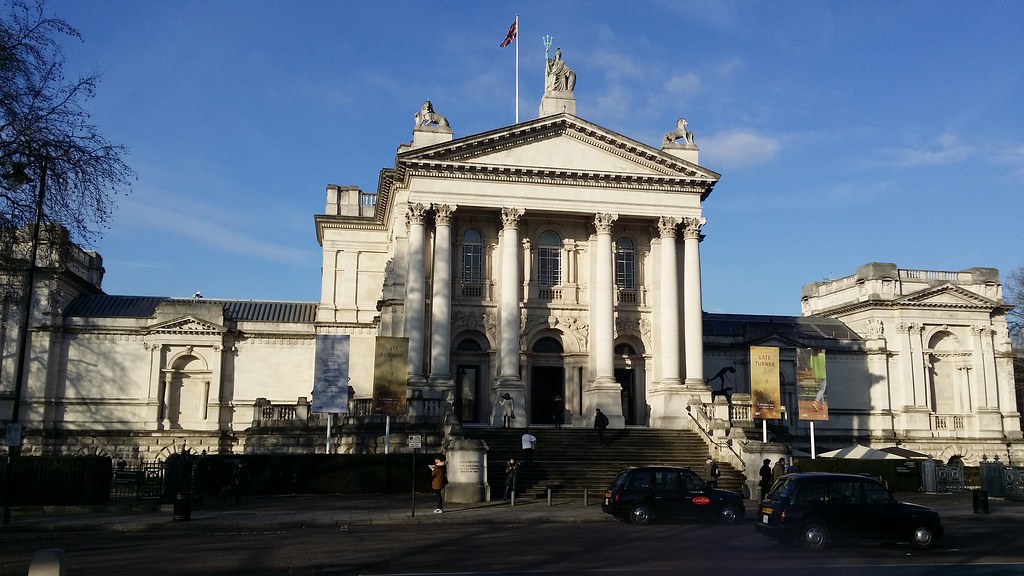 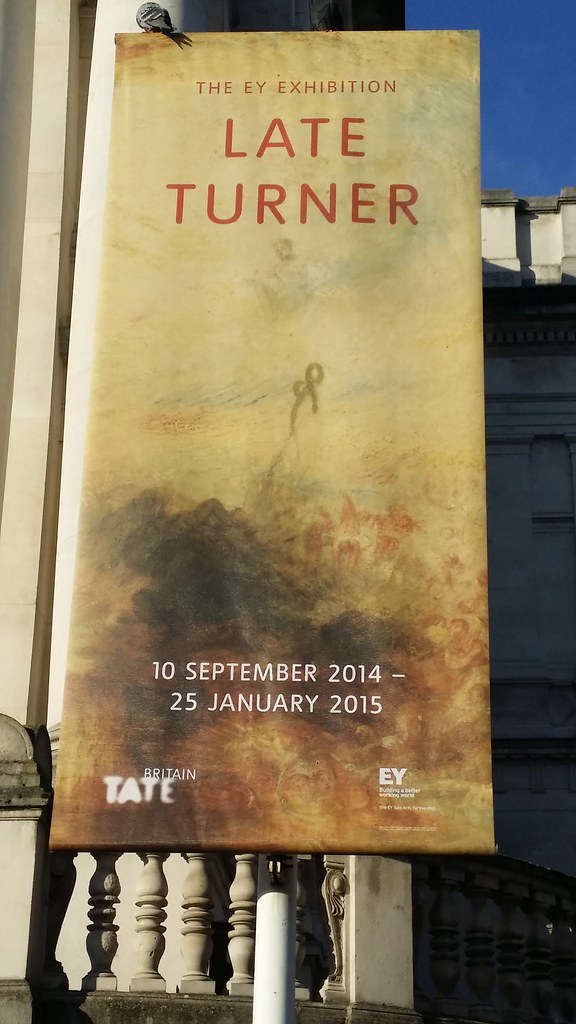 I passed the time with a look around the main Turner gallery, took a turn around outside and came across a statue of Millais at the back of the building. 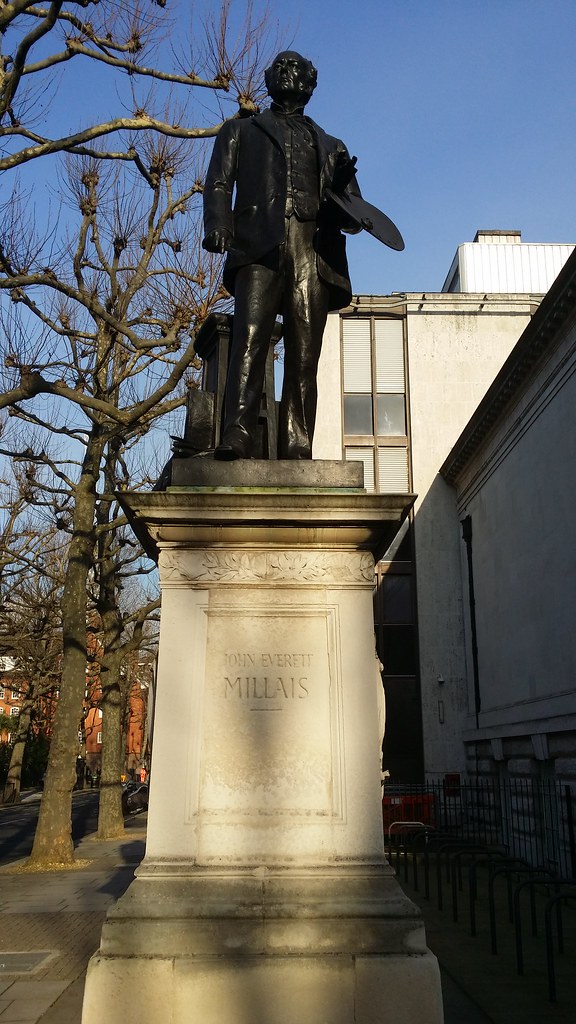 Back inside in the depths of the gallery, I fought my way around the headline exhibition with half of London in there, a hot, claustrophobic experience which I was somewhat relieved to be out of.

Back walking, my route now took me up to Westminster Abbey and I decided to stroll up to Piccidilly by way of Buckingham Palace and Pall Mall. Banners streamed out on the front of Burlington House, home to several learned institutions and my particular target, the Royal Academy. 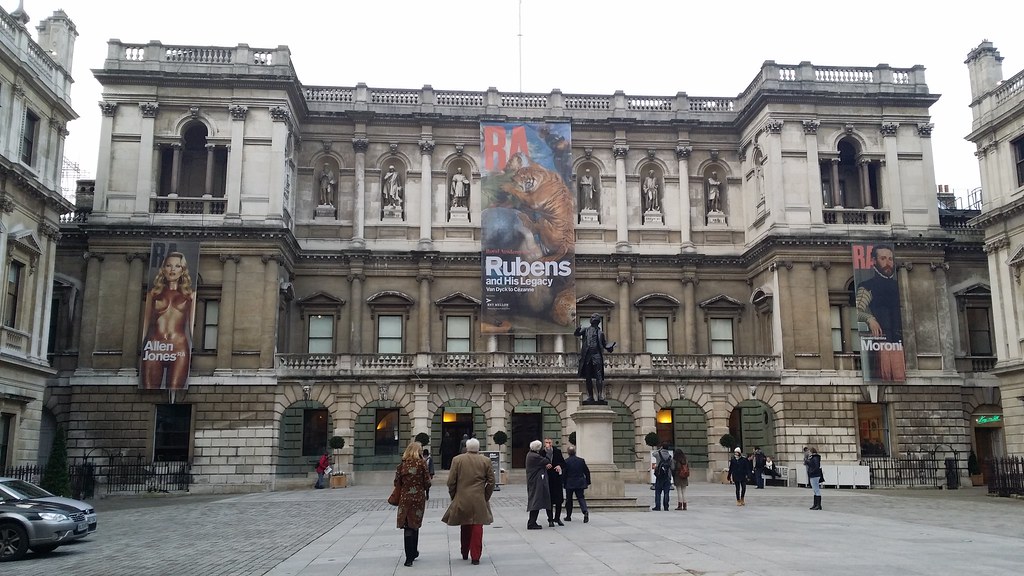 In a prominent position at the front was Sir Joshua Reynolds, founder and first president of the RA.

Behind him on the wall of the building were inset statues of various artists: Phinias, da Vinci, Flaxman, Raphael, Michelangelo, Titian, Reynolds, Wren, Wykeham, although a couple were covered by an exhibition banner. 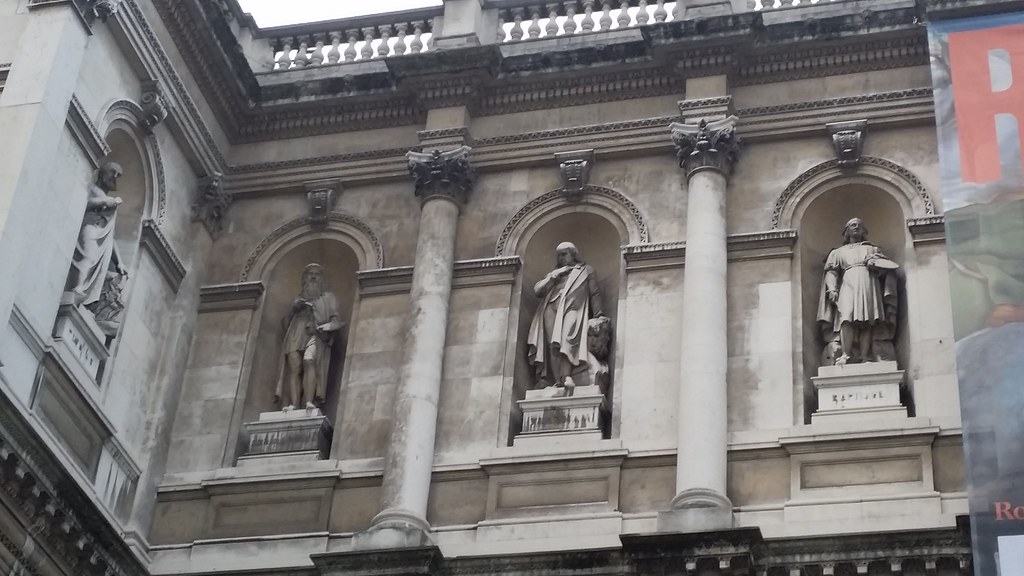 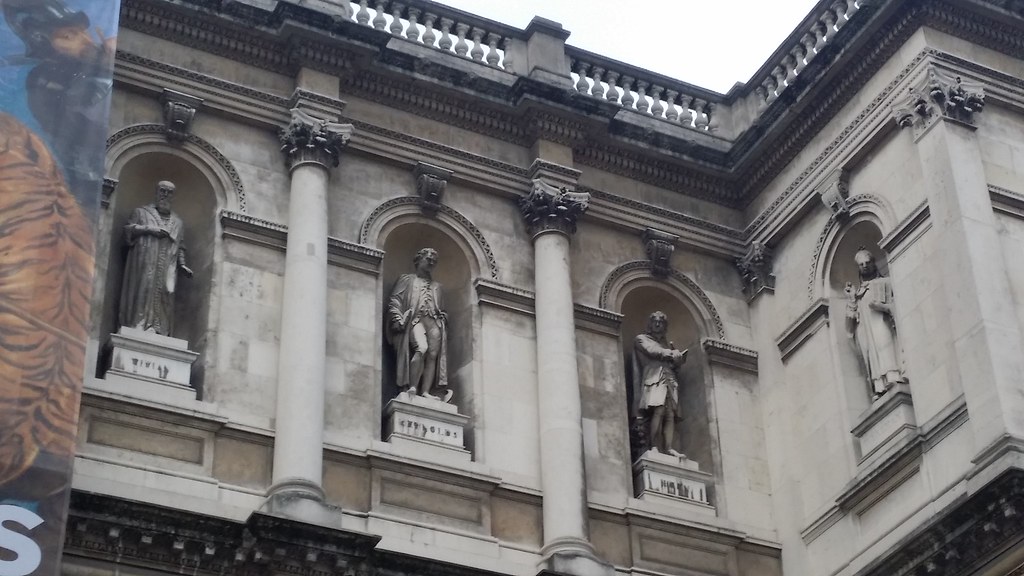 The next objective was really close – on the opposite side of Piccadilly and a few doors down is the former home of the Royal Institute of Painters in Watercolour. Another compilation of various artists high on the facade: Sandby, Cozens, Girtin, Turner, D. Cox, De Wint, Barret and W. Hunt.

I continued along Piccadilly and through to Leicester Square, complete with Shakespeare sitting in the middle – that’s for a future walk really. I dropped down Irving Street and the back of the National Portrait Gallery to pick off the final set of painters in the form of  decorative busts on the facade of the building.

With darkness creeping over the city, and with legs and feet starting to smart a bit from the long walk on hard surfaces, I turned my face towards the east and headed for Fenchurch Street and the end of the walk.

Reflection on the Walk

As the first of a planned series of statues walks, it’s worth reviewing how successful it was. I probably wouldn’t have chosen to start with the artists, but for the imperative to see the Turner exhibition before it finishes. Certainly the fact that the majority of the targets are parts of the decoration of buildings rather than statues in their own right is not what I would have chosen for a scintillating walk.

However, it was genuinely good to come across some of the non-artists, and without these pleasant surprises it could have been a bit of a bland walk.

So next time I will be looking to go for something with a bit more thrill in the statue-bagging itself, and to deliberately chose a theme that has proper statues rather than facades of buildings. Something that takes me into uncharted territory or has hidden gems. And a shorter walk would also be a good idea. But it’s certainly worth persevering with.