The forecast for the weekend was poor, maybe even bordering on lunacy, and was the main reason why we’d decided not to camp this time out, preferring instead the security of hostels and especially the chances they afforded to get dry and warm after a day out on the fells dicing with the conditions.

Today we could expect 40-65 mph winds and negligible visibility on the summits themselves. And today we’d be burdened with all of our stuff at a time when the plan said we’d have to get over the highest point on the whole trip. No pressure then.

With such feats of endurance ahead of us, a decent breakfast was called for and we both headed out just after 8am to seek out a suitable establishment. Unfortunately, Keswick doesn’t open until 9am, or 8:30 at best. Neither of us liked the pretentiousness of the only open place at the time, so we waited it out for a less up-itself joint that didn’t serve food with a load of inedible herbs as garnish, or sound like an M&S food advert on the menu.

Back in the hostel as we grabbed bags to make our exit, I was accosted by the top bunk who demanded to know where I was off to and seeing the size of my pack asked whether I was camping. To this I gave a “yes” and to the follow up question of where “oh, we’ll find somewhere when we’ve had enough”. It may have just been me, but there was something about his tone that made me feel uncomfortable, so there was no way I was going to let on that we were staying at Skiddaw House tonight – he might just be the sort of person who would follow us up there. I felt that putting distance between us would be a good idea and got on my way.

We set off along the route of the old railway, and I could quite happily have continued on that sort of path for the whole day. But soon we had some fields to cross to get us to the Blencathra Centre and the start of the serious business of the day.

We started the zigzagging plod up Blease Fell, having decided to not use one of the more glamorous routes today – partly because of the weather, partly because we were fairly fully laden and partly because I wanted to do all of the summits along the topmost ridge.

Frequent pauses were taken to “enjoy the views”.

We found ourselves on the ridge and above the cloud base. From here on in it was down to maps and compass rather than purely eyes to get us where we wanted to go. Snow fringed the eastern side of the mountain, with the odd patch on the path itself. We made our way carefully over the summits of Knowe Crags and Gategill Fell Top to arrive in time at the summit of Blencathra – Hallsfell Top, with the distinctive trig ring on the ground. We were barely able to stand upright and still, so strong was the wind that I didn’t even want to get my Windoo out to take a reading.

The walk to Atkinson Pike at the head of Sharp Edge brought some more challenge. A path running close to the edge, with the long plunge into Scales Tarn just about visible through the murk and several snow patches to keep us on our toes.

The path started to descend towards Sharp edge and I realised we were dropping off the crest of the ridge. So we clambered up a few feet to the top.

With some icy patches on Atkinson Pike we kept away from the edge and took a more circuitous route down towards Mungrisdale Common, avoiding the worst of the scree. Soon we were nearing the “summit” of the flat expanse.

With time marching on, continuing to Bannerdale Crags and Bowscale Fell didn’t make sense, so we headed down to join the Cumbria Way just to the east of Skiddaw House. A little early to arrive, we were met by Martin, the warden, who promptly got the kettle on and biscuits out.

Skiddaw House has been upgraded a bit since I was last there. New showers and toilet facilities, some reconfiguring in the main living area, but most important of all, new laminated information cards. Martin was especially proud of these, and insisted that we read them, despite having told us everything that was on them already.

The showers proved beyond my abilities to coax hot water out of, and Cath failed miserably too. Naturally, when reported to Martin, he then immediately did exactly what we’d done and hot water came out. By then off course, I’d invoked the contingency arrangement of a backpacker’s bath.

A group of Geordies arrived and good craic was had during the rest of the evening. My master stroke of changing immediately into my sleeping clothes, down jacket and hat was soon apparent when I went to bed a few hours later.

Yesterday’s conditions as we had experienced them weren’t anything as bad as the forecast said, but my heart sunk when Martin shoved a piece of paper under my nose at breakfast. Much the same in terms of cloud (lots) and rain (not much), but the 80 mph wind gusts leapt from the page. The bad luck which seems to have cursed my completion of the Northern Fells ever since that windy day in April 2011 when I couldn’t quite manage Carrock Fell from High Pike, appeared to be making a repeat appearance.

Three times I’ve called off trips to the Northern Fells due to unacceptable weather, but now we’d finally made it  and I was keen to finish the job. Saturday’s plan had been to do Carrock Fell, but yesterday’s incomplete walk had scuppered it. With the forecast we’d be lucky to even finish off Bannerdale Crags and Bowscale Fell.

With many expressions of “we’ll see how we go”, we set off, retracing our steps of the previous afternoon up onto Mungrisdale Common, but this time not able to see where we were going. The summit cairn, such as it is, arrived and I spent a few moments working out which of the many apparent paths that radiate out through the grass like spokes of a wheel was the one we needed. The answer to this was one which appeared to go due east, which should take us to a point below Atkinson Pike and just above the col with Bannerdale Crags.

This worked a treat but after a while we came across a substantial patch of hard-packed snow lying on the slope, and a lack of visibility of what lay beyond. All I knew from my gps was we had further to go to the col. I donned microspikes and went for a recce.

As a result, Cath spiked up and we took a higher line across the hillside that brought us in time to an obvious erosion marking the path down to the col. We headed on up into thicker mist on Bannerdale Crags.

A slightly circuitous route across the ridge and then across the bogs courtesy of the compass eventually brought the summit underfoot. A Windoo reading of “only” 42mph and clearly not quite as bad as we’d experienced on Blencathra. Whilst not that pleasant to just stand in, it was still nowhere near the potential 80mph. If this was the worst it gets, it would be ok.

We headed north to Bowscale Fell, finding ourselves on it a bit faster than expected.

Now the tricky decision. With no visibility, a route straight north would bring us to the headwall of the corrie. A more westerly course was needed, but I still wanted to go down the western arm of the corrie if possible as that way led to a known bridge across the Caldew. All that lay down the gentler western slopes was a wet crossing. A bit of a zigzag and we rejoined the path down the hill, emerging below the cloud base and seeing the tarn off to our right and the footbridge below us. We skipped merrily down the hill to cross the Caldew.

A late lunch, a look up at the seemingly vertical scree-covered south side of Carrock Fell, and the decision to simply head home along the Cumbria Way was an easy one.

Back at the bunkhouse, the party had grown with the addition of a family and baby, and a couple more guys in the same room as me and the Geordies. The size of the party, and some too-highbrow-for-a-Saturday-night talk about the origins of man, saw us fragment into a couple of groups – Cath, me and the “why aye” lads taking the games room and a fiercely competitive game of scrabble.

Bedtime was warmer tonight, due largely to the occupancy of the room reaching 7 out of 8 – always a danger zone in a normal male hostel dorm, but welcome tonight due to the additional warmth it brought at Skiddaw House.

We packed up, threw breakfast down our necks and left a Social Hiking card on the noticeboard – Cath had a bus to catch.

The Cumbria way showed the evidence of some overnight rain, and parts of the path were now under water. So much so that we came across a pair of frisky frogs in the puddles frolicking proudly near to a big black slick of frogspawn. 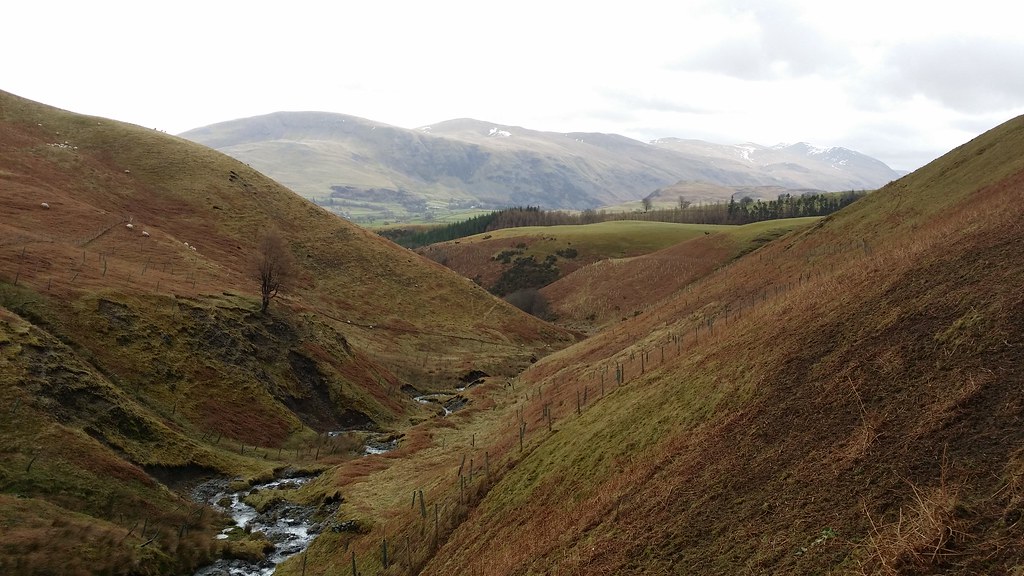 The path took us uneventfully around Lonscale Fell and we judged we just had time to pop on up to Latrigg, where the views were, as ever, stunning.

Taking a steeper than intended route down off the side we rejoined the Cumbria Way and headed into town, giving us just over five minutes before Cath’s bus came.

The bus departed for Penrith, and I turned round and headed in the opposite direction…

2 thoughts on “Finishing off the Northern Fells – Part 2: Blencathra & Friends”