Familiar stations flashed by as the train made its way through Devon – Tiverton Parkway, my old city of Exeter, then the highlight of the whole route with the coastal section through Dawlish and Teignmouth. Soon we were passing Dartmoor, and I craned my neck to get a glimpse of a favourite place. Plymouth and the crossing of the Tamar, HMS Ocean sitting in the Hamoaze bedecked with curling ensigns on staffs rising from her flight deck, reminiscent of paintings of old men-o-war in dock with their masts removed. Brunel’s bridge and within a short while that other, lesser explored moor, Bodmin, a future project. Gradually the place names became more evocative of childhood holidays and recent progress along the Path – Liskeard, Par, St Austell, Truro and finally after a 5 hour ride Penzance.

We stepped from the train glad simply to be out of our seats and headed around the corner to our B&B, surprised to find it actually next door to the rather unsatisfactory place we spent two nights in last year. truth be told, from the outside there wasn’t much to choose between them. Ours did have some fairy lights around its sign though, so optimism was high. The B&B turned out to be functional, displaying a form of shabby chic (the sort that involves no chic whatsoever) and a view of a wall. Our home for 6 nights.

We (re-)explored the town of PZ (as it now seems to be called, whether affectionately or mockingly I’m still not sure), and found a pub for dinner. A walk along the seafront and a stop to sketch St Michael’s Mount then my eyelids were feeling really heavy and it was to bed to prepare for the walk proper.

I wasn’t overly hopeful about breakfast given the experience so far of the B&B. It turned out to be ok, but only that.  We headed out for the bus to Praa Sands, where we ended last year’s walk half a day early.

Meaning to do things right, we walked down onto the beach, but then immediately found ourselves climbing straight back onto the cliffs to undulate into the next bay. A grey day with spots of fine rain being blown by a stiff breeze meant we didn’t hang about as we walked around Kenneggy Sands to Prussia Cove.

We headed into Marazion, stopping briefly at the memorial to HMS Warspite, the battleship that tried to save itself from the breaker’s yard by going aground off the coast here. We took lunch in a bus shelter in Marazion, faced with the choice of being either out of the wind or having a view.

The walk finished with a walk along the sea wall and then alongside the railway back into PZ, a steady trudge right into the wind. After that a couple of beers were called for, and I struck gold with Station Porter by Wickwar Brewery, followed by the best pint of Doom Bar I’ve had yet.

There was much debate about how to do today’s walk and due to the bus times we were going to do it backwards, starting at Porthcurno and walking back to PZ so we had the flexibility to finish whenever. But we were ready so far before the bus left at 10:45 that we opted to start walking from PZ, and this turned out pretty well.

It was easy seafront walking to Newlyn, which surprisingly didn’t smell of fish. Tarmac followed to Mousehole where we used the harbour wall to shield us from the breeze. The Scillonian passed us as we neared Lamorna and we stopped awhile to watch it pass, glad we weren’t enduring the ride to the Scillies given the swell of the sea today. We found some nice big flat rocks to sit on for lunch at Lamorna, watching the sea as we refueled.

The afternoon was sluggish, starting with a rocky stretch around the bottom of the cliffs and evolving into the more usual rollercoaster ride up and down cliffs and into sheltered coves. Penberth came and had been earmarked for a spot to kill some time to avoid having to wait too long in Porthcurno for a bus, but it turned out to be a bit disappointing and far from the artist’s idyll I’d read that it is. The main entertainment was a black labrador who Dad played fetch with using a pebble the hound was carrying around. 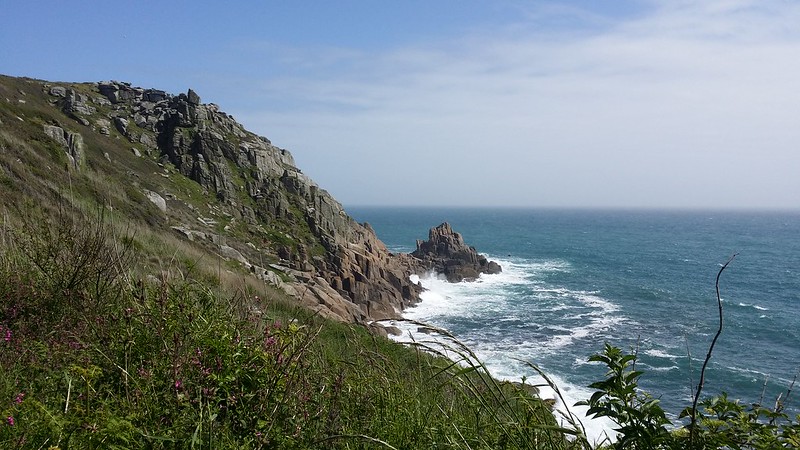 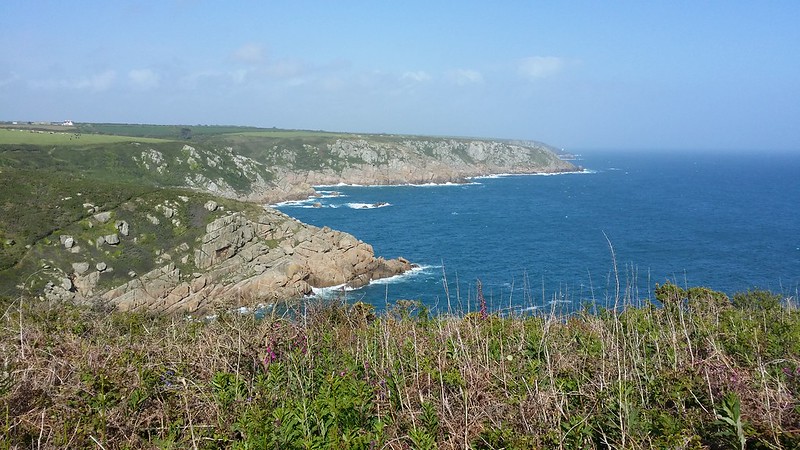 An easy walk saw us into Porthcurno and the chance for some tea and an ice cream before the bus whisked us back to PZ.

One thought on “The Far End of Cornwall – Part 1: The Plodders of Penzance”