The bus dropped us back at Porthcurno, among the tourists arriving to visit the Minack Theatre, and we walked around it as much as we could short of actually paying to get in. We had other things to do.

Up on the cliffs, the views back across the bay were stunning, and yielding more of that rugged rocky scenery that this end of Cornwall is renowned for. That renown clearly stretches into continental Europe, as evidenced by the number of German and Italian campervans we’d already seen about the area. 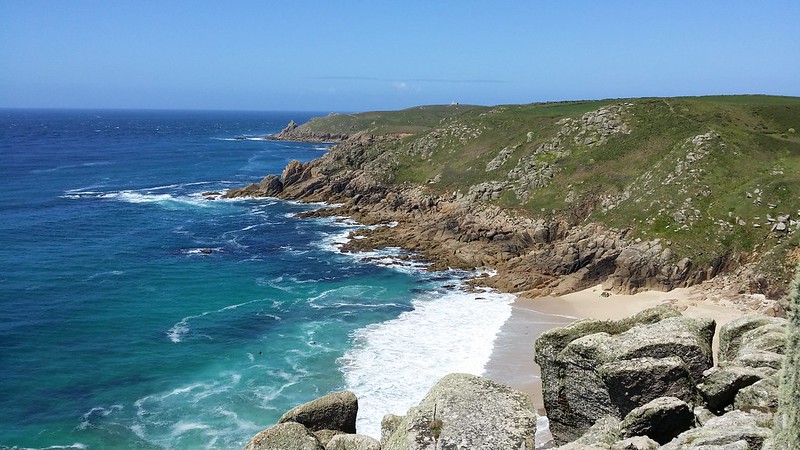 We made our way down to Porthgwarra and back up on to the cliffs, approaching some strange conical shapes. These turned out to be old Trinity House beacons, but they could easily have been giant gnomes buried really deeply. A short way on lay Gwennap Head and a chance for a short sit down and burst of phone signal. 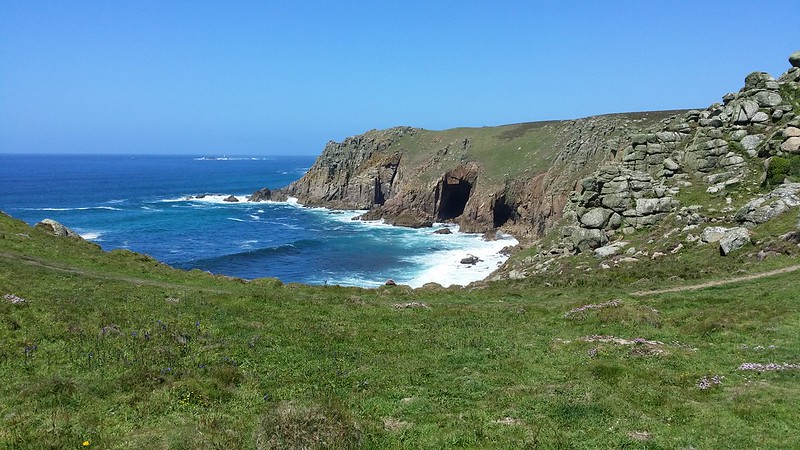 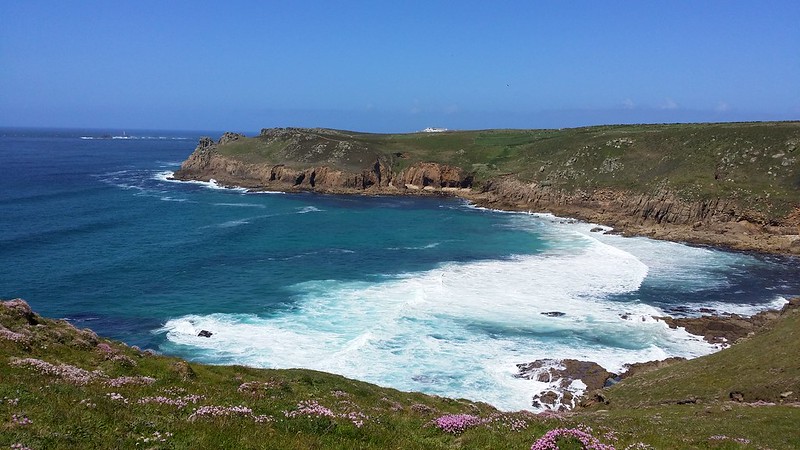 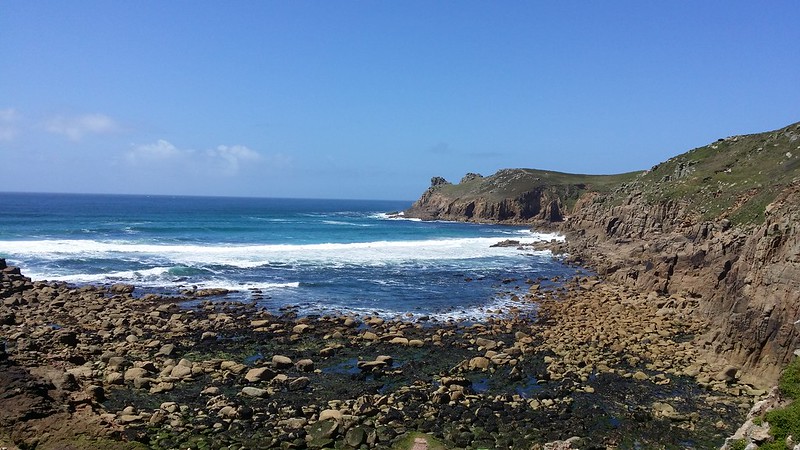 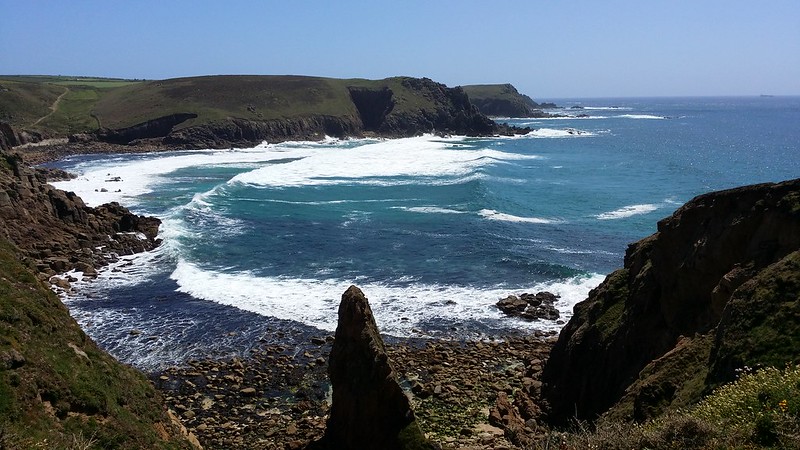 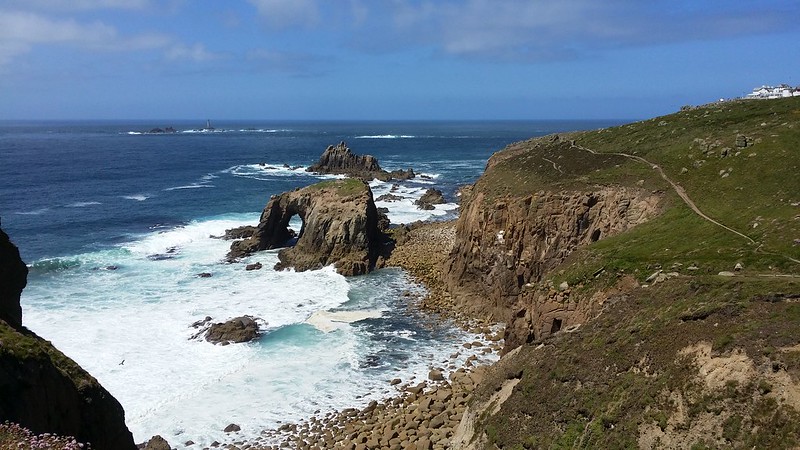 More rugged cliffs and caves with the sea thrashing wildly against them and up ahead we could see The Corner. Drawing nearer we took the Red “challenging” route up a gently inclined gravel path, and around the terrace of the hotel to The Sign.

Hordes of people clustered around to watch those with more money than sense pay a man to put a banal message on a wooden post so they could have their pictures taken. Unnoticed behind them on a wall, a more meaningful set of markers for the far tip of England – a row of plaques to commemorate those who died on the LEJOG.

Distaste for the circus that is Lands End led us to push on a short way to escape the worst of the tourists and we plonked ourselves on a bench near the First and Last cafe. Lunch was taken while I conducted a highly scientific survey of the people that walked past us. Pink polo shirt (German), green trousers (German), speaking German (probably German) and then at last some badly styled beachwear (English). By the end of lunch, I’d concluded that if we fancied having another crack at Germany, the country was probably empty and ripe for the taking. 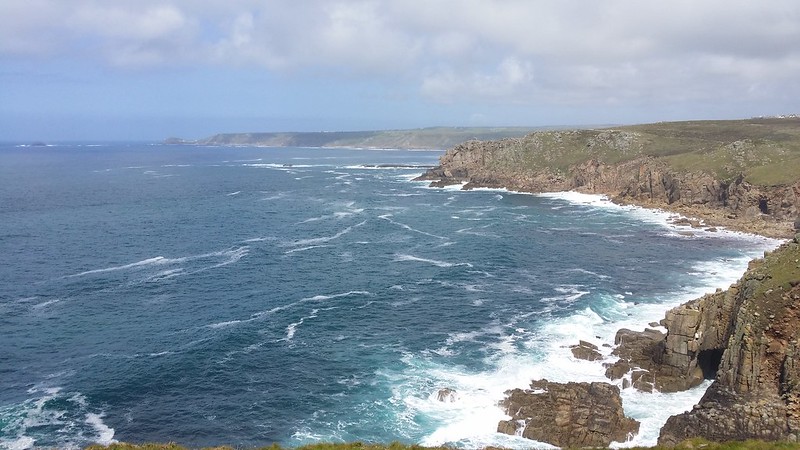 More cliffs, coves and caves saw us to Sennen Cove and a struggle along the sandy beach to regain the path. Low cliffs and an undulating path winding its way around and over rocks made for slow progress. Coming the other way a (obviously foreign) lady stopped to ask me how far to Sennen Cove. There then followed the hilarious situation of me failing to tell her in English, then switching to German only for her friend to translate it back into English for her. OK so my English is clearly not intelligible, but on the plus side it seems my German is ok. 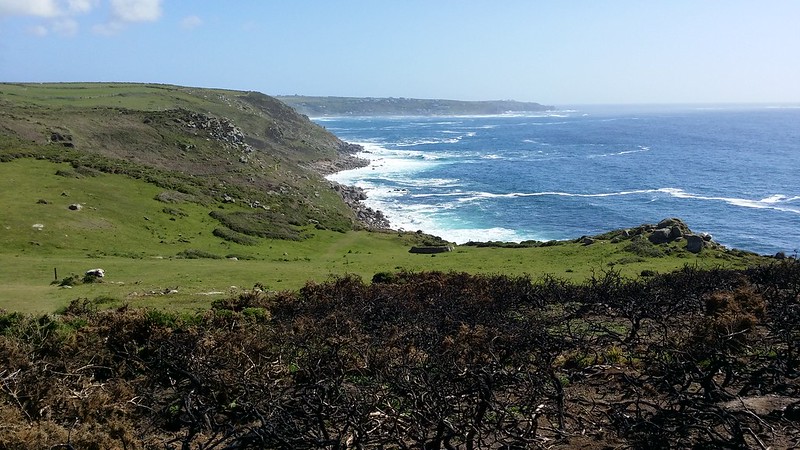 The cliffs saw us to near St Just and glad the long, hot walk was nearly over we headed inland to find an ice cream and bus home.

With The Corner turned, and progress south and west at an end, today we promptly ditched walking north and east to walk, you guessed it, south and west. The reason was the buses, and in particular the scarce nature of the buses passing Zennor, making an evening pick up somewhat risky. So we decided for the first time in 7 years of doing The Path, to do a bit backwards. Or technically forwards since we’re actually doing the whole path backwards officially. Get that ? Pay attention at the back.

Another warm day saw us toiling out through Zennor onto the cliffs and a familiar rollercoaster of cliff top and cliff side walking. Many people passed us, including some weighed down with big packs. It was slow progress today. 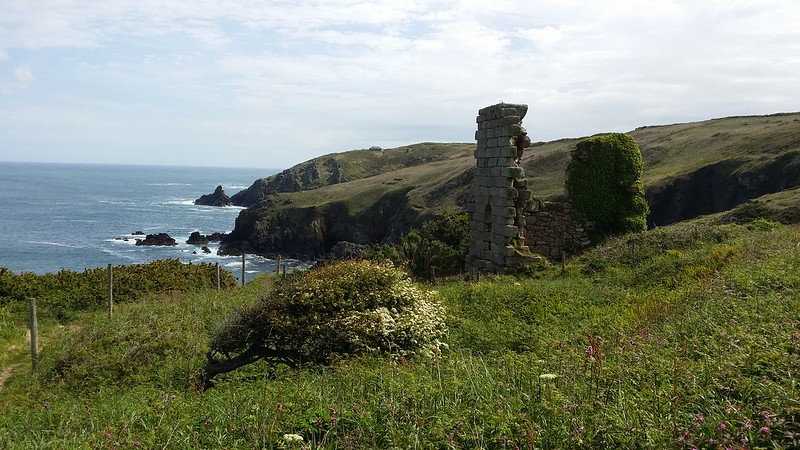 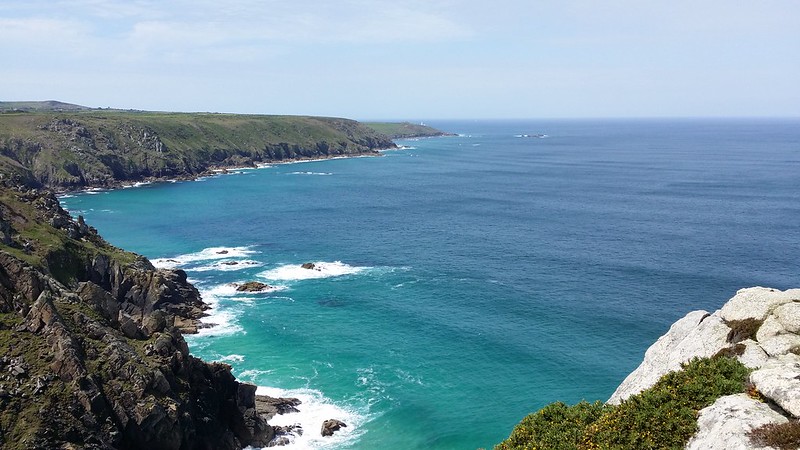 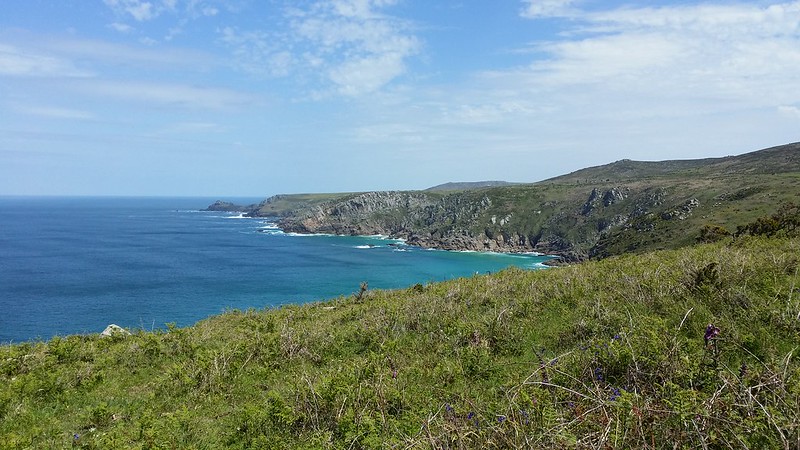 Determined not to stop for lunch until we’d got halfway, we soldiered on to the 6.5 mile point and then collapsed on a grassy slope overlooking a rugged cove, the lighthouse of Pendeen just ahead of us. 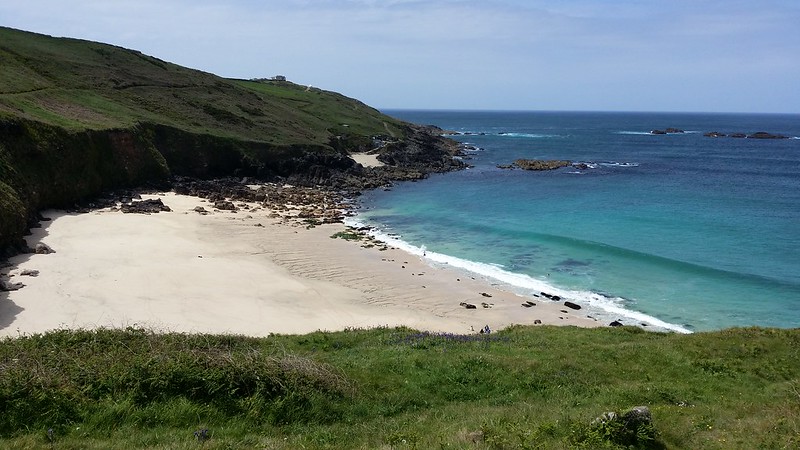 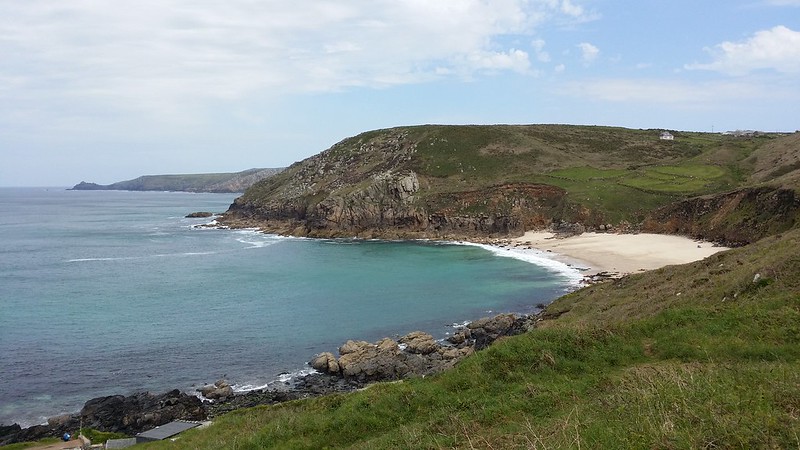 We dealt with Pendeen and then climbed up through the old mine workings at Geevor to regain the cliffs. The wind rose noticeably and the sun took a break as we slogged it out to Cape Cornwall and an ice cream. 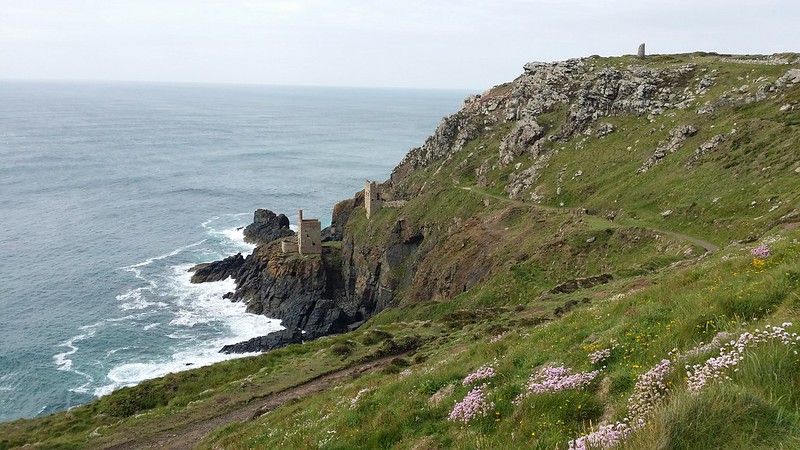 I detoured briefly to climb onto the cape itself, surprised by the monument there revealing Heinz as the benefactor that gave the land to the National Trust.

A final climb onto the cliffs and then we were heading inland again for St Just, finding it actually cold and having to sit in the bus shelter out of the wind.