The Old Man had clearly been struggling the day before, a combination of a dearth of training and a surplus of blisters. So much so that the state of his feet ruled him out of a walk today, so I set off on my tod, taking the same bus journey out to Zennor for the start of today’s perambulation.

The weather forecast could have been another factor in his decision. A big dark grey sky greeted me at Zennor and the big granite Carns nearby were shrouded in fog. As I walked out on to the cliffs, fine misty rain was shoved in my face.

I walked up onto Zennor Head, said hi to a group of guys resting there and carried on.  More of the sort of walking we’d had all week – half way up a cliff, with lots of narrow rock strewn paths, and at a couple of points verging on scrambling to make progress. Dad wouldn’t have liked this. 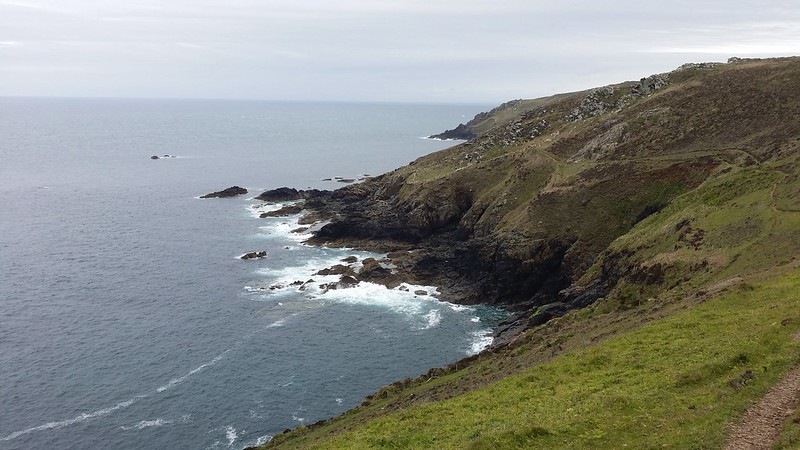 I passed the Carracks and took a break by the trig point on Carn Naun Point, the weather now starting to clear.

By the time I was ¾ mile from St Ives, it was baking hot, and especially so when I sat down in the lee of a rock to look at the vista before me. With no one walking with me today, I was free to use my time as I wanted so  out came the sketch book and paintbox. A rendering of the scene in front of me was duly made.

I walked down the last bit into St Ives, winding my way through the streets to find Dad somewhere on the harbour side. He’d popped in to the town and done a few galleries, including dropping in on an old friend who was exhibiting. We got some fish and chips and sat on the a bench fending off the seagulls while we scoffed the lot.

All of a sudden there was a slosh of brown and white liquid falling from the sky and I had a nasty smear on my knee. Dad had fared worse and was soon wiping his face and glasses of guano. Meanwhile the incontinent avian stayed standing on the top of the lamp post, smugly watching the results of his shooting. People say it’s lucky, but this is the third time I’ve received such “luck” and my fortunes haven’t noticeably improved as a result.

Guano-free we wandered through the town, looking at pictures, Dad for something he liked, and me for something I could compare my own work to. We stuck our head around the door of his friend Shelley’s (@artlantic) place and said hi.

An open-topped bus ride back to Penzance was a huge mistake, with the breeze so strong and branches so low that much peril was involved in simply sitting still. Of course no one on the upper deck wanted to be seen to be wimping out.

That night we reflected on the trip, and in particular the new ground that had been broken with Dad skipping a day. The fateful question was asked “Do you want to do the rest by yourself?” Of course the answer was “No”, but I had enjoyed the day’s walk by myself, and would happily do a chunk of the SWCP solo, but it would be very different to what we usually do – I’d wild camp it and aim for longer daily distances and a more intense experience. But this path is our “thing” and I want to finish it as we started it, at least while Dad still wants to do it. And after all, it wouldn’t be the same without the traditional jokes, the reminiscences about the places we’ve stayed, and Dad taking his own mustard to the pub.