After a long drive, I parked up by the Cornewall-Lewis memorial in New Radnor and met up with Stuart who’d parked just up the road. Stuart dumped his recently acquired Mariposa by my car while he did his pre-walk faff, and I took the opportunity to have a good look at it. I really should have brought my older Dyneema version to compare it directly with Stu’s Robic model, and that feeling only grew as I tried to attach various extra essentials to the outside of my Jam – critical items like beer, whisky and my lunch. The Mariposa is much better for festooning with bits of extra gear.

We set off back towards the A44, crossed under it and climbed up a lane as dark clouds gathered overhead and spots of rain fell. Not enough to bother putting a jacket on, I continued in just my base layer and soon forgot about the rain, which never amounted to much anyway.

We walked up a rough field towards an obvious bulge indicating the top part of The Smatcher, coming across the trig point itself quite quickly. Views were enjoyed towards the bigger hills to the north, and we worked out where we were headed for the planned road crossing point to begin the foray into that bigger terrain. 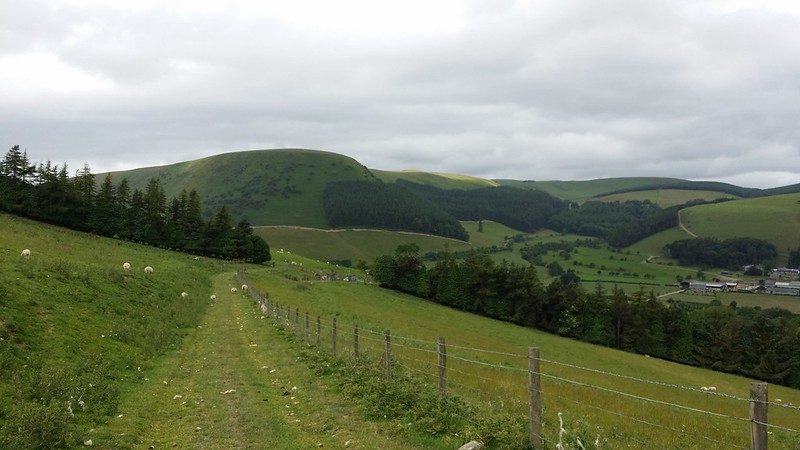 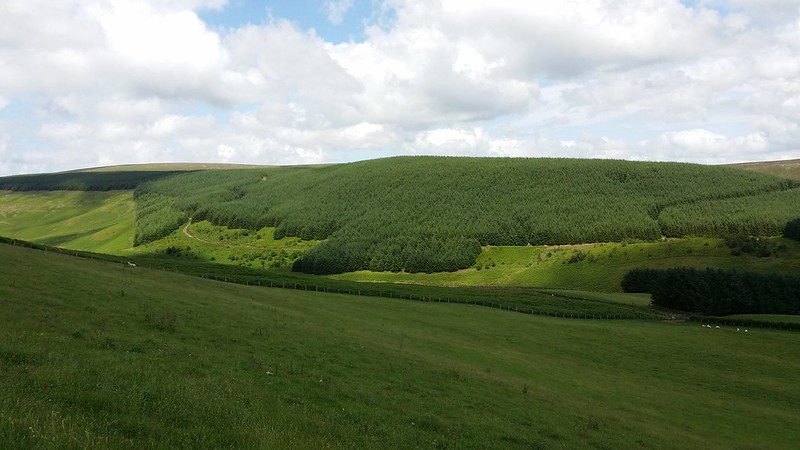 A bit of fun working out where to go as we descended the west side of The Smatcher, down through a band of trees and trying to pick up the track that would take us to the road. A couple of false starts and we got there. Soon we were crossing the road and walking up the track to the Warren Plantation. Our late start just before noon meant a lunch stop on a grassy patch by the track and then we were climbing up the hillside to the top of Nyth-grug, the second trig of the walk.

With the height we’d gained the forest was starting to open up before us. The next target, Great Rhos was obvious to the north. We made our way down to the depression between the hills and started the trudge upwards to regain the lost height. Soon we were at the summit of Great Rhos, and indeed the summit of the whole walk. Time for a pause and a scan of the forest to the north, much of it having obviously been hacked down since my last visit a couple of years ago.

A few isolated lone trees poked up from the array of knee-high trunks and we speculated on the reasons. Not for long though. Soon we were looking down on the col with Fron-wen, this time a lot easier to see the lie of the land across the pillaged forest. I remembered this part of the route well and instinctively took the right tracks. However, we came upon the summit a lot sooner than I expected as Stuart suddenly stopped on a crest on the track and announced this was it. Two years ago I’d spent a good amount of time thwacking across brush and scrub trying to find the apparent high point, and all the time I’d already walked across it on the path. This is why I let Stu handle the navigation on our walks – he uses his gps assiduously, and quite frankly he won’t let anyone else do it anyway, he’s such a control freak.

Memory plays a part though, and my recall of the route down to our planned camp spot took over as he tried to match up what his phone was showing to the more erratic woodland tracks. We emerged right where we needed to be and started scouting out the proposed pitch, opting for a quiet spot near the edge of the field.

A brew went on and a discussion about the quality of the available water began (and indeed was still going strong on via Twitter the day after we got home). Wary of taking water that was visibly wobbling in the still afternoon and that looked like it had already passed through humans once, Stuart set off on an excursion to find a spring, returning empty handed. He now asked me to convince him the pond water was safe. So I told him it was safe.

After telling him it was safe, we then went to go and look at it to see if it was actually safe. The first few scoops that went in the dirty platy were clear, albeit containing a liberal sprinkling of additional protein. As the platy filled up I was actually pleasantly surprised how good it looked. I mean there were things swimming in it and it looked like piss, but I’ve actually had far worse in the Lakes and lived to tell the tale.

We went for it. And we lived. Or at least long enough that I’ve been able to write this up.

Tents were put up, the standard jokes about keeping poles up were trotted out, and we settled down for the serious part of the trip – the drinking. Relaxing with a beer, Stuart leant back and put his hand right in some sheep poo. I then had to endure 5 minutes of obscenities as Stu employed his full ovine-hating repertoire of invective. I had to have another beer, my throat was so dry from laughing.

A jolly and companionable evening by the tents was had as the sun went down, and then Stuart suggested we go and bag the proper top of the Tump we were parked on. Now let’s be clear about one thing – he’d stated he wasn’t going to bother with it, before we’d opened any alcohol. He made it across the first barbed wire fence ok, but then he is so tall that he has one of those flashing red lights on his head to stop aircraft flying into him. Me, well I impaled myself on the wire. At which point I gave up. He went off the idea soon after too.

As midges buzzed around our heads and darkness crept up on us, and with the beer and vodka exhausted, we called it a night and retired.

A 7:40 start saw us heading across the field and up the track by the side of the forest, a swarm of flies accompanying our every step. Personally, I put this down to one of us still wearing a sheep shit glove from the events of last night. There were a few grumbles as we toiled up the rough stony track, but these soon evaporated as we stopped to look back down over the forest. Only a slight climb across the heath and we arrived at the top of Black Mixen (Black Dunghill), which we’d briefly debated camping on last night. Glad we didn’t as we found the area taken over by radio hams who’d clearly been there all night. We moved on.

A short walk away and a fence separated us from Great Creigau. A wobbly climb over and we were then confronted with a walk over heather-packed bumpy ground to find the totally unremarkable summit. It really wasn’t worth the effort for a deleted Nuttall. I lagged behind on the crossing, and Stuart thought it was funny to stand by the fence and wave jelly babies to encourage me. 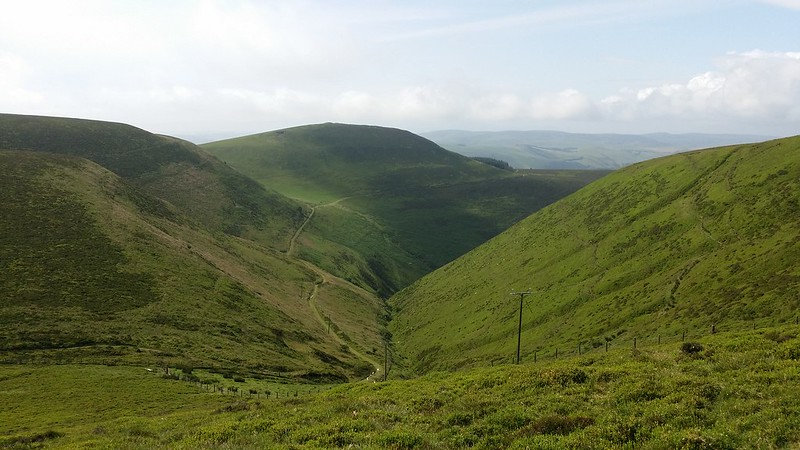 We descended down to the area affectionately remembered as Sheep Poo Pass from my last visit. Ahead of us was a slanting climb over rough grass to the final Nuttall of the walk – Bache Hill. We made decent progress up until the crest of the ridge and a high barbed wire fence, that even looked like a challenge for Lanky Boy. He risked impalement while I acted on a hunch / dormant memory and headed a short while along the fence to the stile. And a track through the heather, which got me to the summit with all of my downstairs bits intact. Engage smug mode, as Kryten would say.

Stu was now losing enthusiasm for peak bagging and the sight of the steep pull up onto Whimble, a mere Dewey, didn’t appeal, and having already done it on my previous visit, I wasn’t going to insist on it. The prospect of a chicken dinner and avoiding the incoming weather probably was also a factor. We cut down through the forest and made our way back to the cars, another adventure in the bag.

4 thoughts on “24 Hours in the Radnor Forest”