The plan was ambitious, and as it turned out, too ambitious. A dry and warm forecast for the weekend, and the need to get out for a camp in August to maintain the goal of a wild camp every month led me to the attempt to finish the Wealdway.

It was always going to be a big ask: two 15-18 mile days to finish the thing, which is a bit of a commitment even when I’m feeling fit. And I’m far from fit at the moment, the inevitable decay and atrophying of walk muscles that takes place when I’m working sees to that. Still I thought I’d give it a go.

The first mile was great, retracing my steps out of Uckfield, except that I found I could continue along the river and avoid the climb up into the housing estate. A simple matter of a locked gate to negotiate and I was back on the Wealdway.

Now it started to go wrong with a path closure. With no useful information at the poorly taped off path (if you’re going to divert an official waymarked route, then you need to recommend an alternative route, not leave it to people to work it out for themselves), I took the closure as probably unnecessary caution and carried on. A few fields around a stud farm and I approached the point where the path crosses the railway, along which I’d just travelled. A huge great portcullis of a gate barred the way. Bugger. They meant it then. There may have been some swearing.

I reccied the naughty route via the much lower fence, but didn’t like the look of the equivalent on the other side of the railway to get around the matching portcullis. But there was no way I was going to retreat all the way. I contemplated the non right of way 300m dash between the stud pens against the mile or more alternative back along the Wealdway. The dash won***. A quick look over my shoulder and I was off.

Halfway along, a gate and beyond that donkeys, loads of donkeys. A bit of braying and jostling to get away from me ensued. Clearly donkeys are on a similar intelligence level to sheep. Soon they let me overtake them, once they’d seen one of their number let me pass and seen it was ok.  A couple of false starts and I found the way across the field and railway. Naturally, when the path ran into the Wealdway there was much better signage at that end, along with a clear map showing the alternative routes. There may have been some swearing.

A succession of roads and open fields followed, and indeed made up much of the rest of the walk. A few brief forays into woodland provided momentary relief from the scorching sun.

Lunch was taken in East Hoathly, a convenient bench by the church being irresistible. The hope of a shop to buy a cold drink was a forlorn one, consigning me to the warm water I’d been drinking all day so far. More fields, being channeled through crops, more horse-breeding places, and at one point someone burning manure. I rolled into Chiddingly lured by the sign for the village shop, only to find it a mile away, in the wrong direction, in Muddles Green. The pub it would have to be then.

The Six Bells was clearly a bit of a local, and I felt a bit self-conscious. I got my lime and lemonade down my neck and was on my way. The temptation of Hale Farm a short way on was huge. A big flat grassy campsite, not marked on the map. But it was clearly full of families, and it was way too soon to stop. A mental note made for the future though. 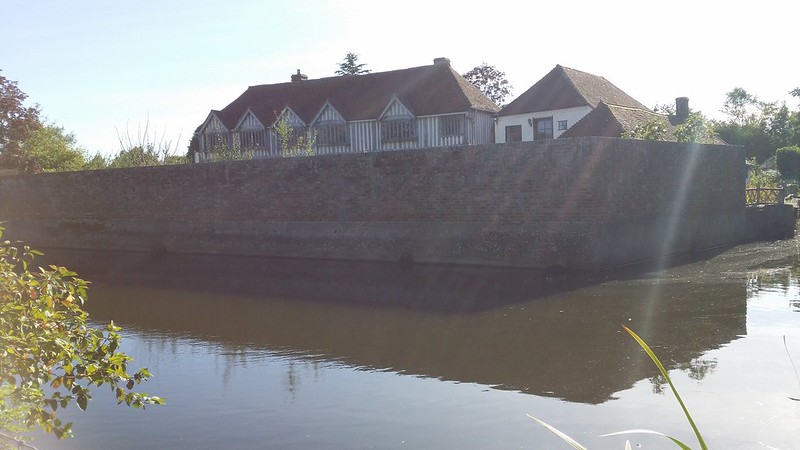 The pace was slowing as I reached Hellingly and the start of a section that would see me follow, not always that closely, the Cuckmere River for a while. Soon, after a day of almost spotlessly clean paths, the way was marked with litter and bagged-up dog shit. I must be nearing a town. I reached the top left of Hailsham and the path disappeared into a housing estate.

I tried to follow, as the waymarks signed a jink to the left. With no more waymarks, I found myself heading crudely southwards through the streets, and had to resort to getting the GPS on. A change of direction, a clamber over a fence at the kids’ playground and I recovered the Way. Then I lost it again. Badly. There may have been some swearing. And then some more.

Ahead of me, where the Wealdway should be was a building site and no sign of where to detour. A bit of wandering around ensued before I found myself back where I started. There may have been some swearing.

The GPS was in use again. I forced a way around the edge of the site and onto newly built residential streets. Ahead of me I could see the A22 which I had to cross. A look down the direct path where he Wealdway should have been ended in a tall metal fence. There was nothing for it but to attempt to find a way out through the streets.

Right by the A22, I found the point where the Wealdway runs around the new housing development. Teeming with signs and maps of course. There may have been some more swearing. Taylor Wimpey now joining East Sussex County Council on my “If I ever get a chance to get even with them…” list.

Evening rapidly approaching and the fight was gone out of me. Too many navigational challenges for a simple countryside walk, too much unnecessary extra distance covered. Few swear words left unused. It was clear I wasn’t going to get the 18 miles done I’d hoped for. And another thought had started to take root: why force myself to do the walk tomorrow, probably not enjoy it and miss out on an opportunity for another camp? If I quit at Berwick, I could finish off the path in a similar 24 hour expedition another time, and squeeze in a camp on the South Downs. The logic was inescapable.

I started looking for somewhere to pitch. Empty fields stretched out in front of me, and by the side of one I came across a pond. A brief look in the rough field beyond it ruled it out as a camp spot, but I took the precaution of grabbing some water. I suspected I wasn’t going to make it to Upper Dicker to resupply. By now I was looking for a pitch in earnest, and scouted out a few spots where I’d be hidden from civilisation by hedges. But they were too close to the path, so I carried on, eventually finding one in a dip at the top edge of a small field. 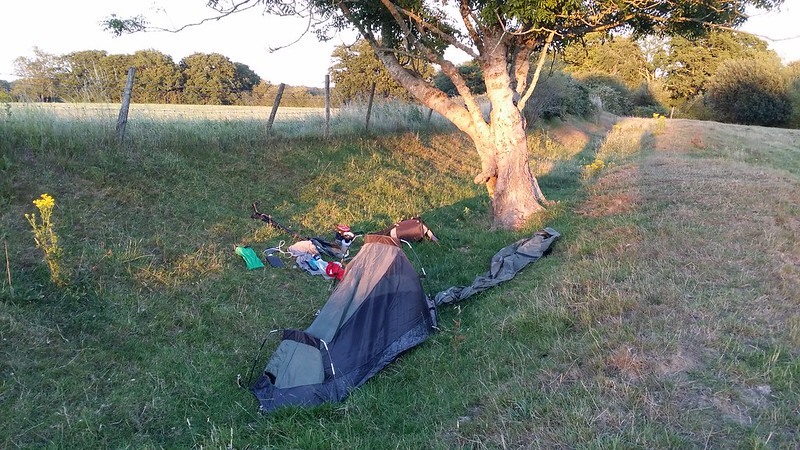 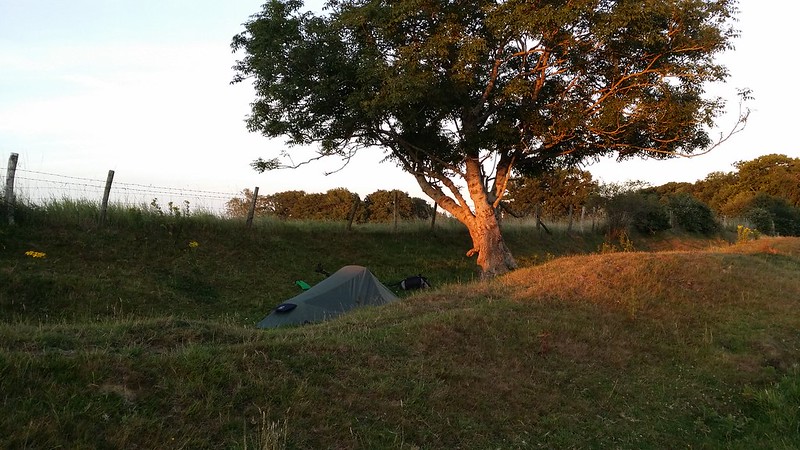 I waited it out until it was unlikely anyone would come along, and killed the time with a brew and my Kindle. As the sky became orange, I put the tent up and had some dinner and another brew, watching the rabbits silhouetted against the evening sky. The hoped-for silence from the nearby “adventure” park (basically a race track), and some distant pounding music didn’t come until after bedtime. A group of drunks in the next field caused some momentary alarm too. There may have been some swearing.

Light came and all was quiet. Well apart from the noises I expected to hear – birds. The rabbits were up early as I packed up and had breakfast. I was on my way for 8am, the new plan being to finish as early as I could so that I could get home and recover a bit of the day for other things.

I walked through Upper Dicker and concluded that if I’d carried on I wouldn’t have had much joy with the shop here either, by the time I’d have walked through last night. More fields brought me to Arlington and some imprecise signage that saw me tear the wrong way across a rough field only to find myself emmeshed in brambles by the river. There may have been some swearing. I found the way out and was soon heading along the road to Berwick (no shops open here either) and the train home. The train was packed with language students and Chelsea fans, the journey unpleasant. There may have been some swearing. And not just from me this time.

And so the plan to do the Wealdway in 3 chunks of 2 days apiece is shot to bits. A 4th section it is to be. This chunk was, in hindsight, a bit tedious – endless farmland and horse brothels coupled with navigational irritants. But it would have made an ideal penultimate day to the walk – the sort of day you know you need to get through as tomorrow comes the reward with the grand finale. Except I’ll now have to wait until September before I have a free weekend to do that.

Deer and Detours – Tonbridge to Uckfield

3 thoughts on “There may have been some swearing… (Wealdway: Uckfield to Berwick)”