I’m no stranger to this particular patch of woodland on the North Downs. Numerous walks have been done through or alongside it, but always solo. This time though I had some company.

Stuart (@LoneWalkerUK) was already at the appointed rendezvous when I drove up and so a little under ten minutes later we were heading off down the same Blackberry path as my last North Downs walk. A blank sky lay overhead, completely at odds with the fine weather forecast for the weekend. Odd wisps of mist hung trapped in depressions, and all in all it was a bit of a downbeat start to the walk.

We walked north, making for Cobham, on a route devised to show off some of my regular haunts in the area and to give Stuart something to bag, even if it was just a Tump, a Unitary Authority Top and a trig point. 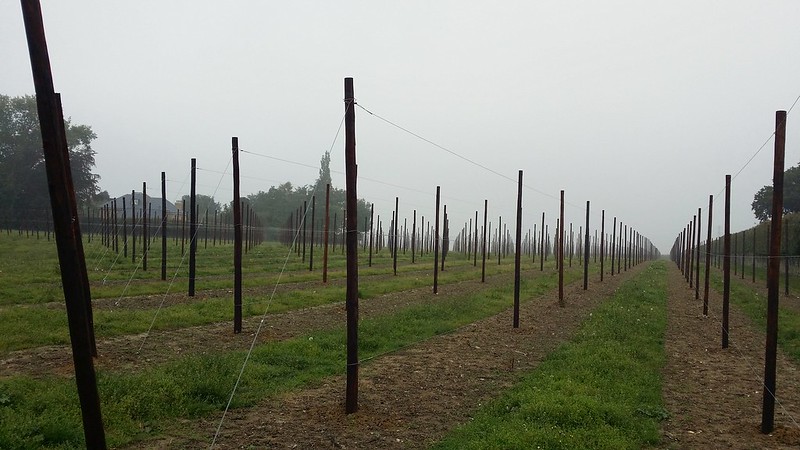 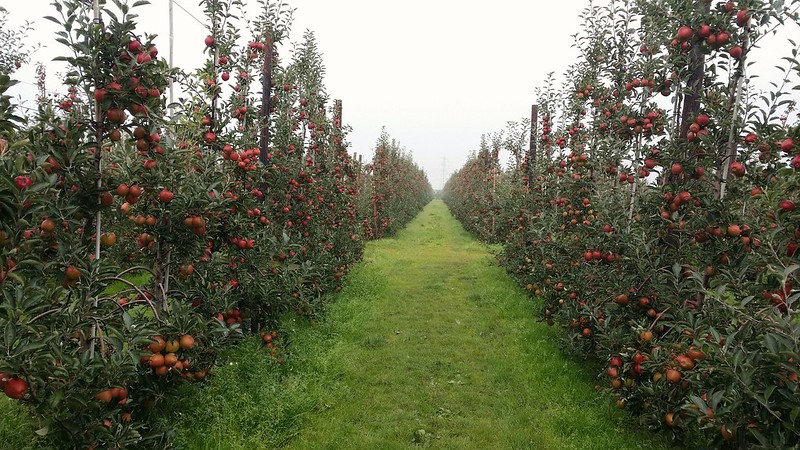 An orchard lay across our path and we weaved our way through the apple trees.

Lunch was taken on a bench in Cobham churchyard, admiring the man who’d chosen a bathtub for his tomb, before we walked through the Darnley estate to our first target – William’s Hill, marked by the Darnley family mausoleum. 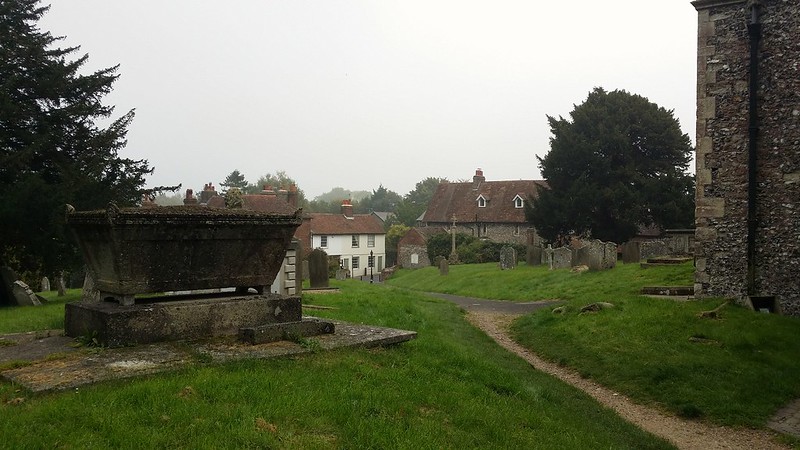 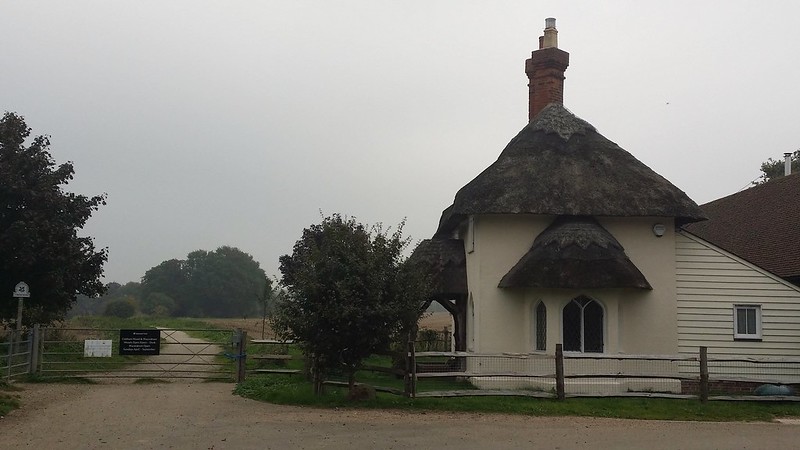 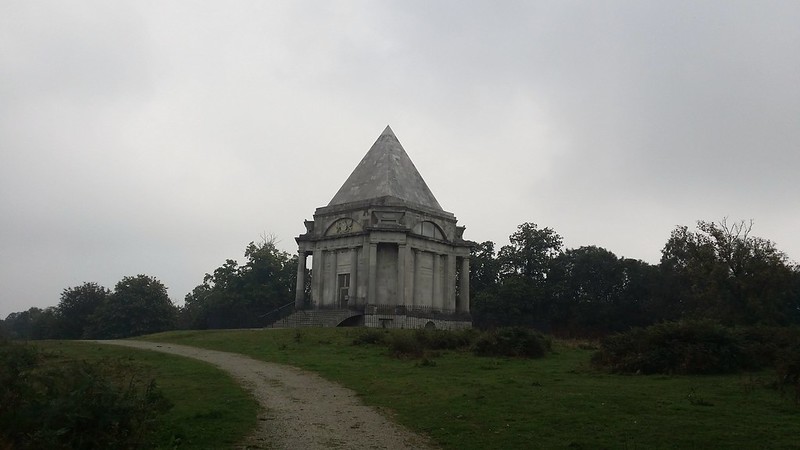 Across the fields we walked down to cross the railway and climbed up through a valley to gain the woods. Someone had been busy here building a bivouac against a tree. We didn’t know it at the time but in hindsight this may have been an omen. 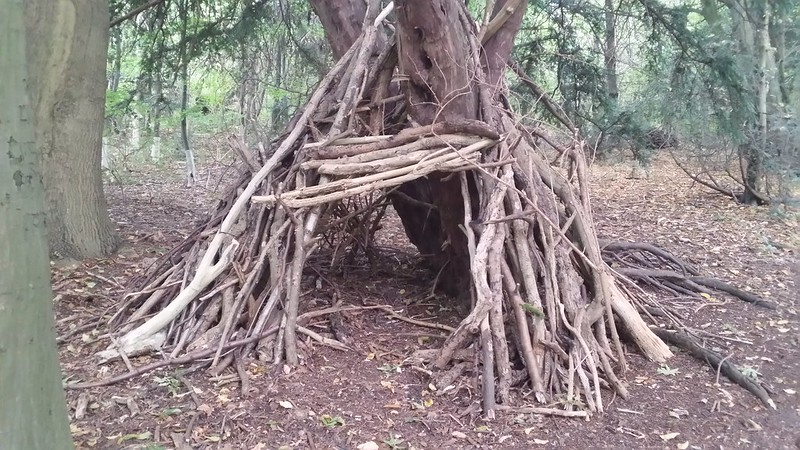 With the day cheering up and the sun burning off the blank canvas of the sky, we walked through the woods, beams striking down through the trees. Every so often Stuart would shout “Squirr-alllll” as he spied a bushy-tailed rodent scurrying up a tree. 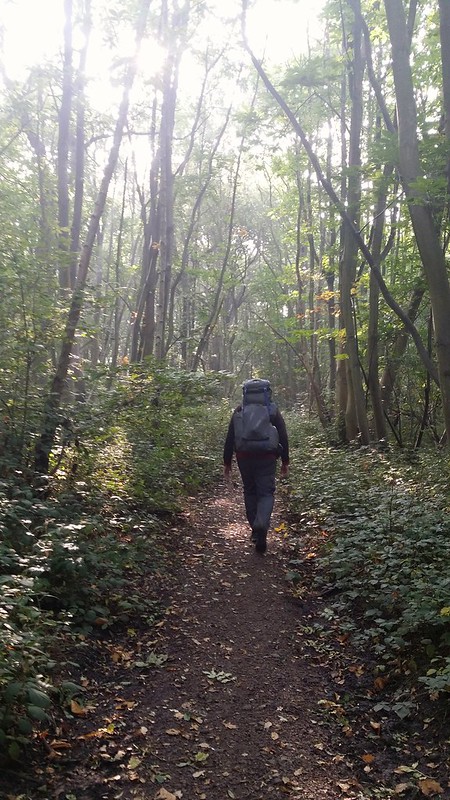 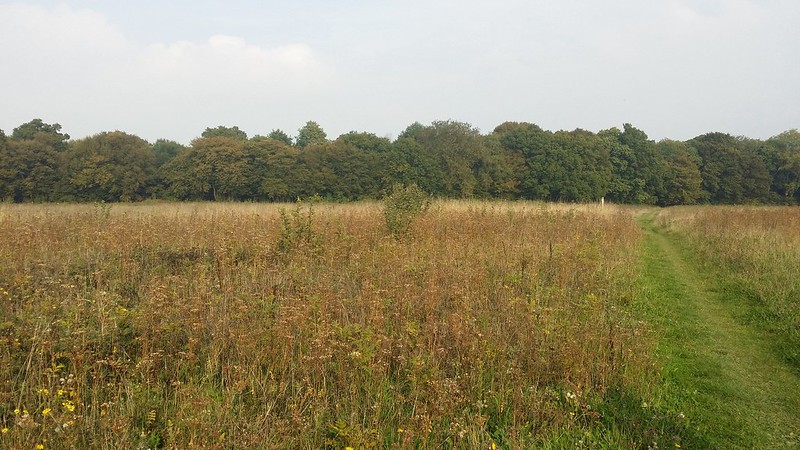 We crossed Slug Meadow and I could tell Stuart wasn’t impressed with it as a wild camp location owing to the rough thistly long grass fringing the path. It’s actually much better away from the path.

Across several more meadows. we emerged onto a byway at Cockup Corner, the point where several times I’ve missed the turn-off going the other way. Not today though, the waymarking has been much improved. Possibly it’s even a bit over the top now. 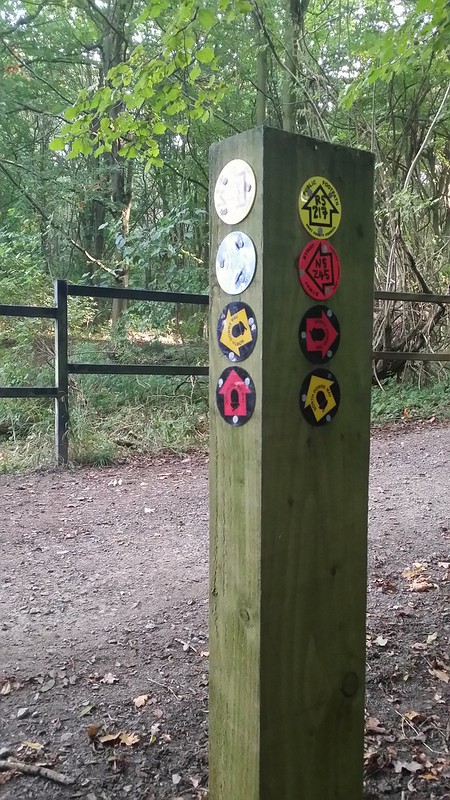 By now various groans and complaints were coming from the other member of the party, and it was beginning to become clear that Stuart’s legs were in a state of mutiny. So much so that our planned drop down and back up the escarpment to retrieve a cache of water for camp was looking doubtful. Stuart had left the cache, so it wasn’t even much use me being able to go on and find it. Desperate measures were called for, and we found ourselves begging for a top up of water at a nearby house. Stuart stood at the door, a dog’s face perilously close to his groin while he awaited the results of our pleading.

Relieved to have escaped being the dog’s snack, I gave him some further good news when he got back to the gate – City had won 6-1 with Aguerro scoring 5.  His incredulity seemed to last the rest of the trip.

We entered the wood and cut diagonally across it, making for a spot I’d marked on the map. We got there and the hoped for open but secluded patch didn’t exist. We stayed in the wood coming across another bivouac, this time complete with fireplace and frying pan, as well as a home-made bow for shooting any deer that happened to be passing. 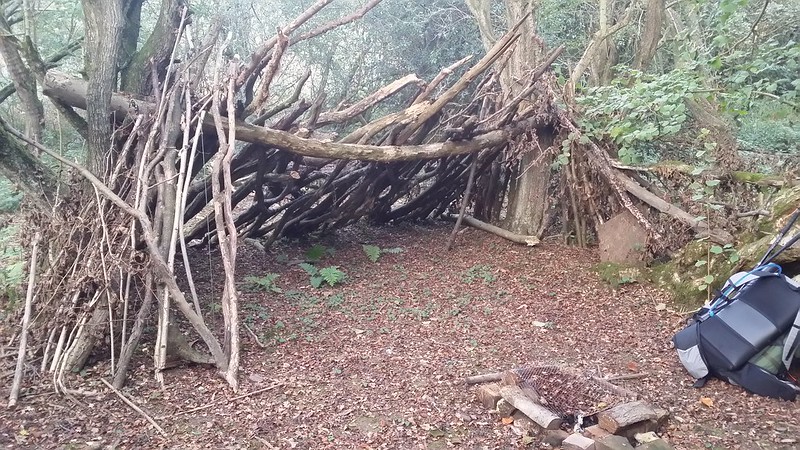 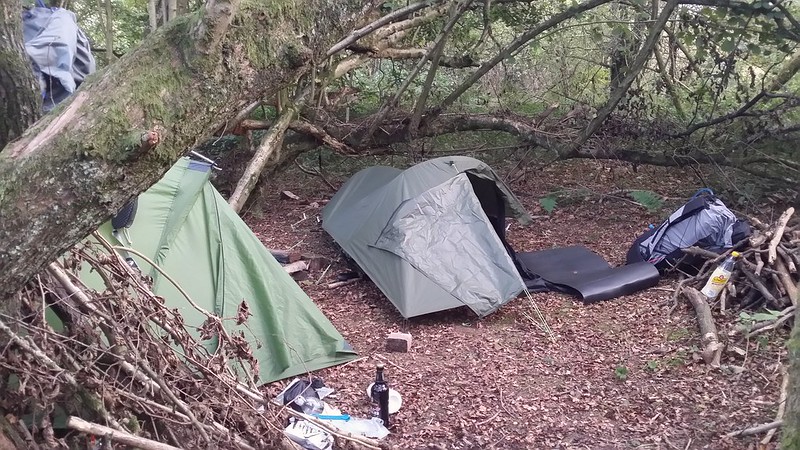 Up went the tents, as darkness fell. Out came the stoves and dinner. Some beer was drunk, some gin and tonic too. With the temperature dropping, the warmth of sleeping bags was sought and we drifted off to sleep, rudely interrupted every now and then by owls and the panicked screeches and desperate flapping of startled pheasants. I wished that bow had still been within reach. 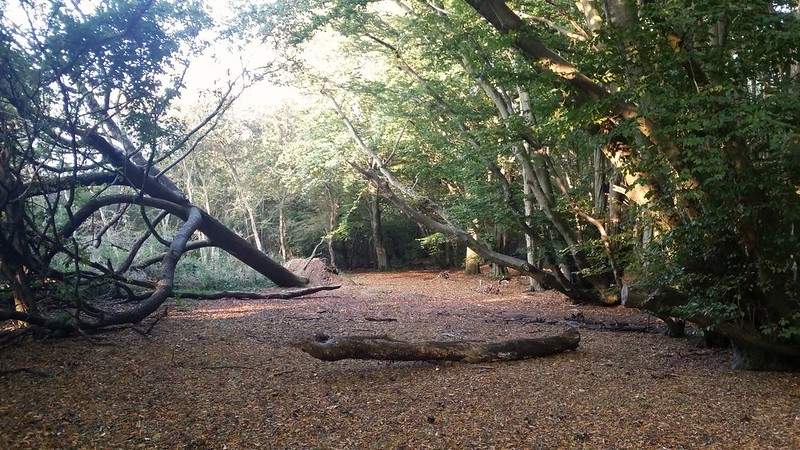 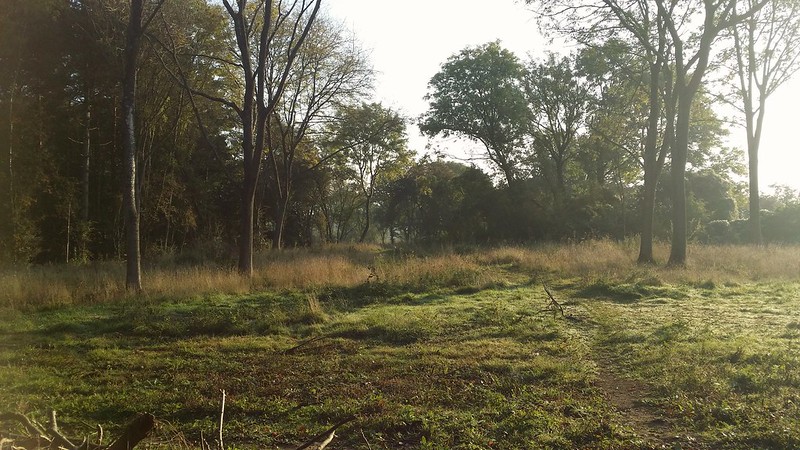 Light came and we stepped out of dry tents to be greeted by a more promising day. Through the wood we continued, as usual finding more good spots only a few minutes walk further on from where we’d camped. Mental notes were made for future outings. 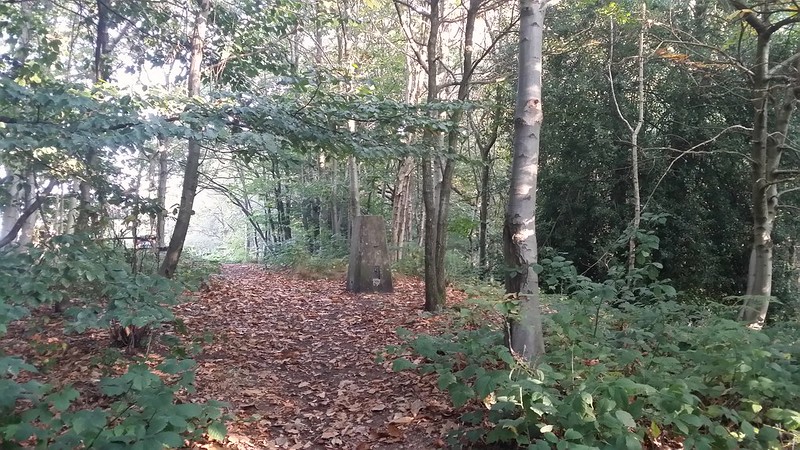 We emerged to a road and started climbing up onto Holly Hill so Stuart could get a trig point. A frustrating place this as although it’s the highest point around, the actual county top called Holly Hill is lower down on the district boundary. We headed down to do our best to bag it, knowing it’s right alongside someone’s property and likely to be screened by impenetrable bushes. And so it was. We got as close as we could and then turned away. 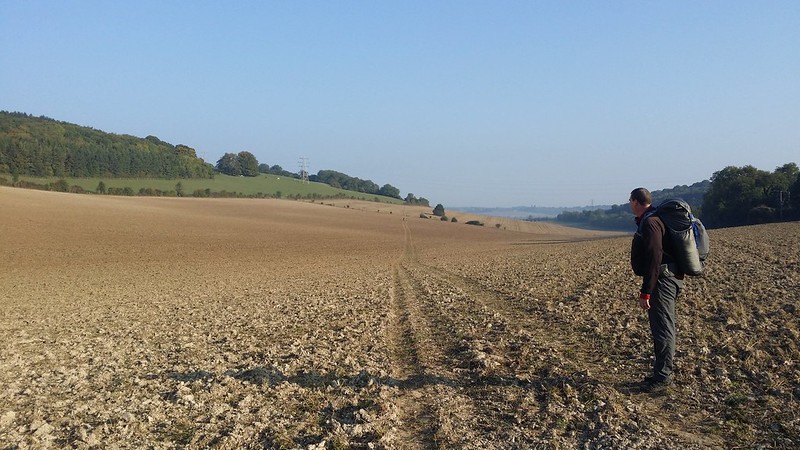 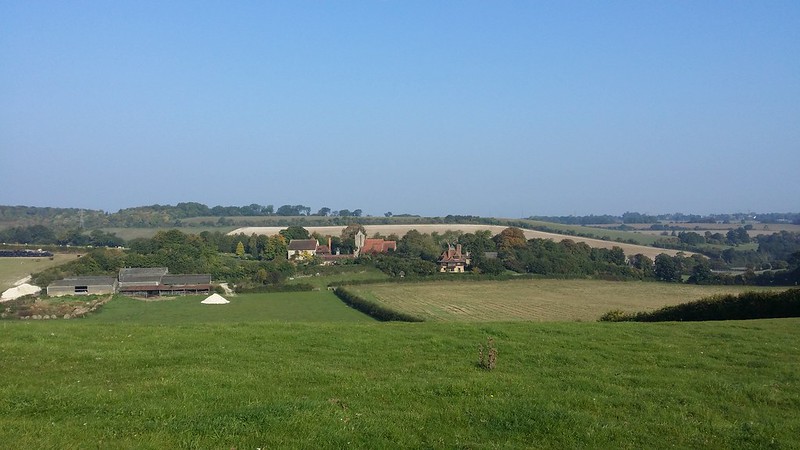 Through the Bowling Alley, acres of dry muddy fields with the very first poppies emerging. Then we were climbing up and looking down on Luddesdown. A stroll through fields got us back to the cars.But only after one final climb that finished off Stu’s legs. 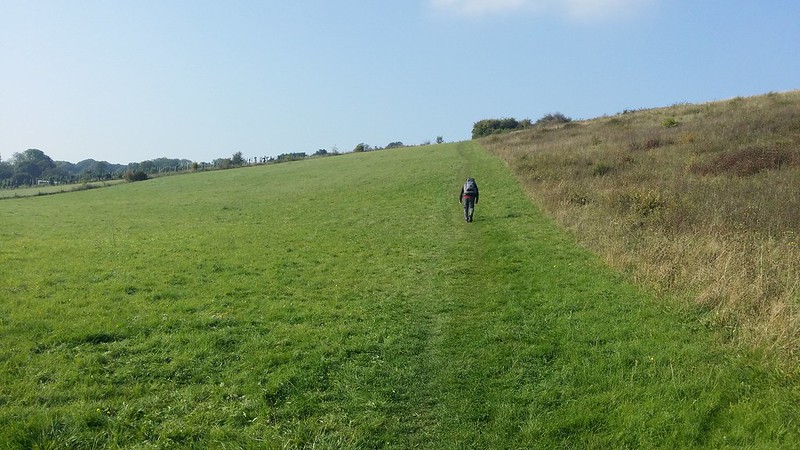 One thought on “Screech Wood”