Apart from a forlorn-looking ice cream van (why are the damn things always there when you don’t need them and never there when you do ?!) and a couple of cars dropping off kids on the school run, Ilam was deserted as Stuart parked up and we put on our packs. A short walk across fields brought us to the start of Dove Dale, Thorpe Cloud looming above us, but not tempting us to an ascent of its vertiginous slopes. No one else was to be seen as we skipped merrily across the stepping stones, a further reminder that we were naughtily out galivanting on a weekday. Further reminders of this as we made our way along the almost deserted dale, ambling along looking at limestone formations and caves. Stopping for tea in Milldale, a horde of school kids in the ubiquitous and seemingly obligatory high-vis were being herded down river. We ignored them as we brewed up on the riverside with just the ducks for company. Much anatine comedy ensued when a piece of walnut was “accidentally” dropped. 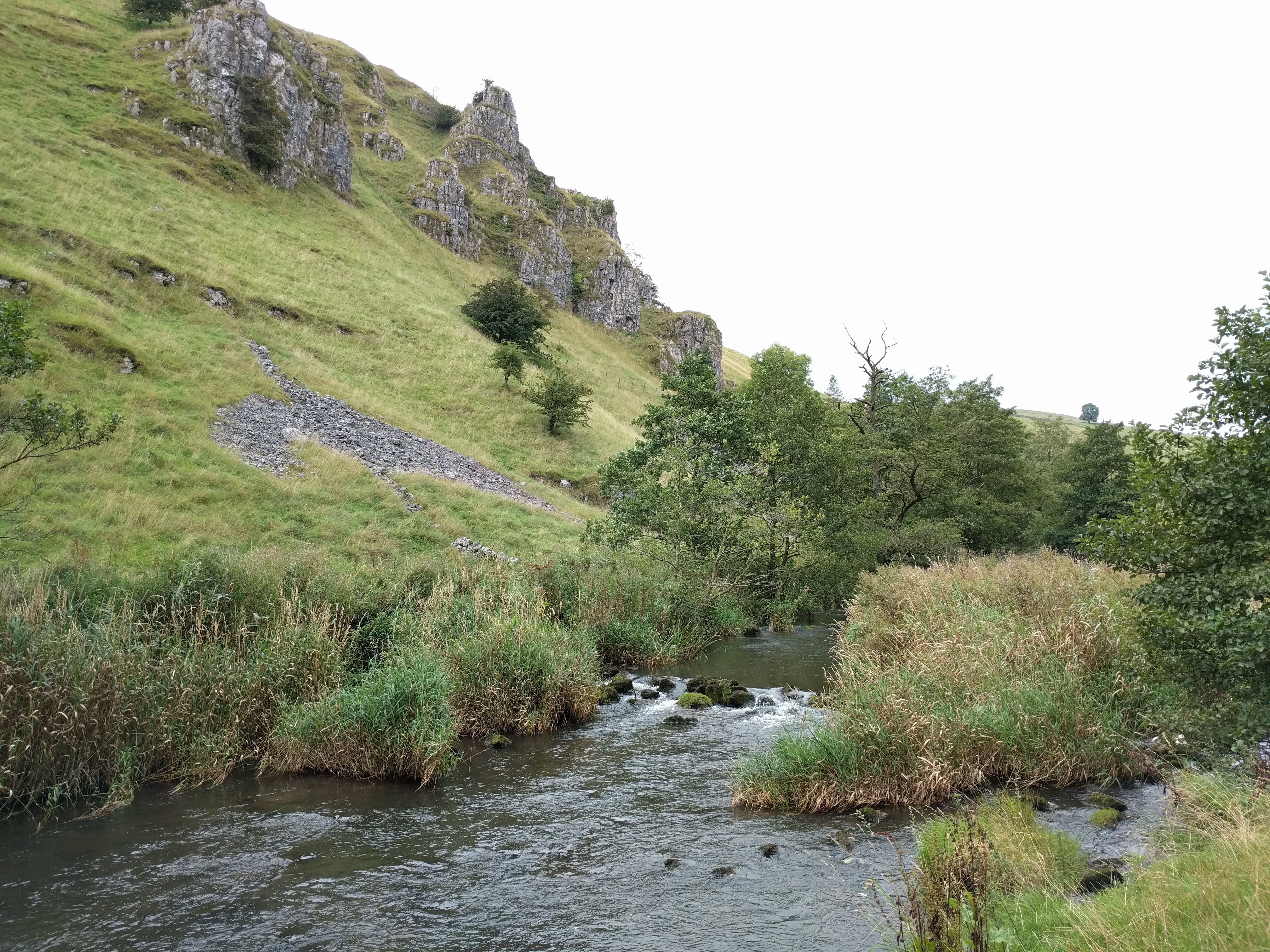 Further along the Dove we went, entering Wolfscote Dale. Miles passed easily and soon we were in Hartington and choosing a pub for our early dinner. Then it was a shortish pull out of the village to Pilsbury Hill. The field we’d ideally wanted to camp in had two drawbacks – it was occupied by cows and it was also open to the full force of the wind. We opted to hop over the wall into the next field and use a bit of shelter. Much fun was had with Stuart putting up his new Stratosphire for the first time in field conditions, with poles the shape of bananas. Luckily one of my Pacerpoles came to the rescue.

A cool night and the rain started early, driving us into our shelters.

Day 2 started with a steep descent to the old motte and bailey castle. Jumping up and down like an eager toddler, Stuart was keen for me to take his picture atop the mound, and so he shinned up and struck a few poses. Sadly he pulled something in his knee on the way down. This was potentially useful shortly afterwards when we encountered a bull and his harem who really didn’t want to move from the gate they were blocking. I consoled myself that the bull would probably concentrate its efforts on the wounded member of the party 😉

Chrome Hill and Parlhouse Hill came into view as we pulled into Crowdecote and walked around to Longnor to find a cafe.

We’d altered our route to better fit in a pub and to make the Dragon’s Back easier, and furthermore decided to ditch Chrome Hill which we’ve both done before. So soon we were clambering up the steep end of Parkhouse Hill to gain the ridge. Having done the worst bit of the ascent up the slippery mud, Stuart decided to save his knee and not finish off. So I headed up onto the rocky bit solo, encountering a complete rambling club on the summit. This didn’t encourage me to linger and soon I was down and we were heading for Earl Sterndale and the Quiet Woman. Back in time we stepped to a world where the pub experience consisted of a few pies on the bar, a grumpy landlord and absolute silence.

A couple of lunchtime pints is not the best thing for a long afternoon’s walk, and progress was initially slow. Stuart opted to pick off a Tump close to the road, whilst I took one look at the height of the barbed wire fence and decided not to. I still haven’t forgotten the time last year when a similar “excursion” saw me impaled on a Welsh fence. This was best left to those of taller stature.

We stopped off at the Brierlow Bar bookstore, which claims to be the largest bargain bookshop in the country. It didn’t seem that big though. And quality was deemed questionable when Stuart found no copies of his Pennine Way book in there. Because obviously every author wants to find their book in a bargain bin don’t they ?

The bookshop yielded one thing of value though – ice creams.

Across the road was a revelation. An innocuous public footpath sign led down a grassy slope to the start of Back Dale. I’ve driven past here a few times and never realised. Gradually the dale deepened and vegetation became wilder. We stopped to gaze in wonder at the junction with Horseshoe Dale – it really was like a secret place.

Back Dale gave way to Deep Dale and the way became harder as it seemed that few come this way. Scattered rocks in muddy ground, waist high nettles and low branches slowed our pace.

It was a relief to reach the A6. Walking now became easier as we headed into Wye Dale and the start of the Monsal Trail. Discussion of camp spots and water-gathering strategy as we strode out the last bit of the day’s walk.The last hope of buying water evaporated as we went past the tuck shop just after closing. This meant we stuck to the original plan of dropping down to the River Wye on the other side of the Chee Tunnel. Finding a flatish spot we decided to camp there too, rather than climb up onto the tor itself as originally planned.

A more benign camp tonight, with the opportunity to chat and have a few drinks before tiredness dragged us away to our shelters.

Sunlight broke through for the first time on the trip as we rose and packed up on Day 3. Stuart was heading for a pick up in Taddington and wanted to get going, the lure of a chicken dinner doing its usual job of making him impatient to finish the last day. He disappeared up the hill while I was packing up.

I rejoined the Trail and turned left to continue the previous day’s route, following the trail as far as Litton Mill. Then I turned up into Tideswell Dale, ambling along and really taking my time. I wasn’t due to meet Cath until 12 and had loads of time.

So much so that it was 10:50 when I rocked up at a cafe for a second breakfast/early lunch. Some time was killed and then with 20 minutes or so until Cath was due I went and sat outside the agreed rendezvous of the church. With Cath texting her (very slow) progress, I chilled out with my Kindle and dried Matilda in the sun on the churchyard wall.

Cath arrived nearly at 1pm and we set off, our way a relatively undemanding series of roads and byways that took us over Bradwell Moor towards Castleton. Which of course is where a White Peak journey ought to end, but I had different ideas. We left the Limestone Way and made for Mam Tor, climbing up to enjoy the summit with a few dozen people.

We’d made really good progress so decided to kill a bit of time on the Tor and have a proper break. This nearly cost us dear when we set off to head along Lord’s Seat and then onto Brown Knoll, the way easy and aided by paving slabs, but seeming far longer than it looks on the map. We eventually made it about 20 minutes before sunset and just about found a patch of heathery grass, or more accurately “non-bog”, to pitch on.

The wind picked up during the night and we rose early, our target being the chance of breakfast before our train home. 07:32 saw us heading across the slabs for Jacob’s Ladder. An uneventful descent and walk through the lanes brought us to Edale and a fry-up in Coopers Cafe.

This walk was loosely based upon an idea for a walk I’d had a couple of years ago, attracted by the Limestone Way / Limey Way, but wanting to include more of the River Dove and a bit less agriculture. The route Stuart came up with was pretty similar to my fantasy route as he too wanted similar things, and so it was easy to agree on what was an enjoyable way across the White Peak. This is probably the best Peak District trip I’ve had yet, and it was refreshing to spend some time in less frequented dales rather than just sticking to the tops. I’ll definitely be exploring a few more of the lesser known dales.

2 thoughts on “The White Peak Journey”