Stood at the sink washing up one night in September last year, it suddenly occurred to me to add up the number of camps both I and my daughter, Rebecca, had done so far that year (I think of a lot of odd stuff like that while washing up). I realised with all of the various forms of Scout camp she’d been on that year, we must be pretty close in our totals. It was, nevertheless, a bit of a shock when I found out how close:

And so the competition was in that instant born. Courtesy of 3 nights in the lakes, finishing the Wealdway and a couple of camps with friends in Kent and Essex, I managed to come out on top.

Both of us felt the competition was a good idea, even though Rebecca knew that I had a bit of an advantage, being an adult (allegedly), in that I could just go out and camp at the drop of a hat. She couldn’t be quite so free and easy. So in deciding to carry it on for 2016, we tweaked the rules:

With no more planned camps for Rebecca, and it looking unlikely I’ll get out for one before the end of the year, it’s time to assess the results. And I’m pleased to say I have won, although it was a struggle. By September, I was 6 behind. and that was before allocating any double points to Rebecca. 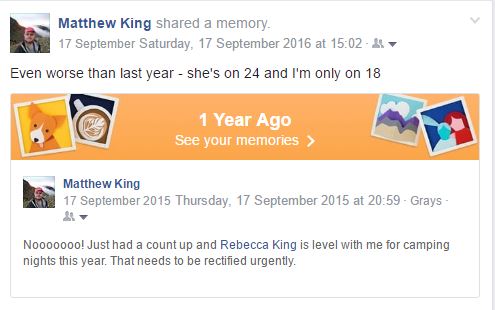 I got there in the end, mainly due to the week spent walking the Devon Coast to Coast with Paul (yielding 3 wild camps and a tame camp that wasn’t eligible for inclusion), and a four nighter in the Lakes at the end of October. More about this later.

So the final scores are 26 to me (I also did 4 tame camps that don’t count), and 25 to Rebecca (24 camps, of which 1 was a wild camp). I did it, just, and the margin of victory is a concern. This year, unlike 2015 I’ve not been working during prime camping season, so in theory should have walked this. But that hides the fact that this year I did more wild camps, or for that matter camps of any kind, than ever before. Indeed, we’ve both upped our numbers this year. The reason this was so close is twofold:

As you’ll see the race became quite tense over the summer:

The competition started on 12 March, when desperate for a camp, we both headed out one Saturday afternoon to a spot I’d found on a local walk a few weeks before.

And instantly I was 2-1 down on the scoreboard. Rebecca didn’t seem to mind her first wild camp, and said she’d do it again if there was less walking and it wasn’t so noisy. Mind you taking her for more would be a stupid idea in competition terms.

Rebecca started on her round of Scout camps – with the Cubs, the local jamboree, a jaunt with the Beavers, another jamboree and finally the summer playscheme. She pulled inexorably ahead after I’d had an initial burst of getting out after my work contract ended.

One of the best camps of the year happened early on – in May when I was in the Lakes for Terry Abraham’s Blencathra film premiere. A poor experience at Angle Tarn kept awake by a group of 14ish tents that rocked up late and partied until the small hours, was compensated for by a walk up the Blea Rigg ridge and a solo camp overlooking Stickle, Easedale and Codale Tarns. A great sunset and sunrise and some nice valley mist effects made it a magical time.

That one camp also spawned quite a bit of my art work this year:

Later that month, a quick overnighter on Dartmoor, yielded my first Brocken Spectre courtesy of a little inversion in the valley of the East Okement.

In June, I finally finished the North Downs Way after 10 years of on-off work on that project, including a camp above Cheriton.

A week later I was camped at the summit of Blencathra on referendum night. A memorable camp for more than one reason.

At this point I’d just snatched the lead in absolute numbers of camps, and Rebecca headed off to her Beavers sleepover where the young leaders were tasked with being on duty in the night in case any of the little darlings needed the facilities. Her camp for that night was thus: 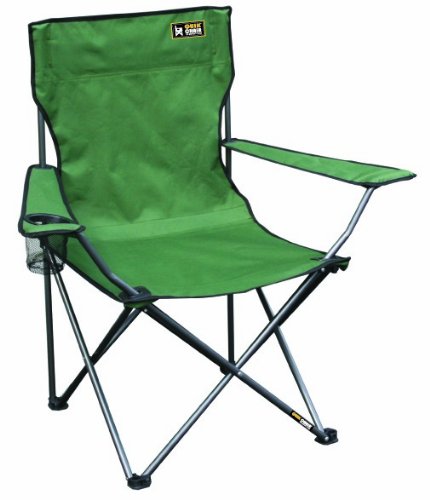 earning her the prize for the oddest sleep.

I built a small lead with a section of the Cambrian Way, and a long-awaited trip to the Doethie Valley. The highlight of the short trip, though, was the night on Garn Gron – a stunning sunset and sunrise seen from my summit camp, and yielding a further painting:

Rebecca’s jamboree saw her soar into the lead again, while I tried to stem the tide against me with another one-nighter on Dartmoor with Paul, Jim, Colin and Neil. This was also the first camp in my new MLD Duomid.

My August trip to the Lakes was damage limitation, but yielded some good camps – at High House Tarn, Great How, Green Crag and a magical night atop Bowfell:

By 10 September Rebecca was done, and my target was fixed and clear. I started with 3 nights in the Peak District, walking with Stuart and then a single nighter with Cath. Not prize-winning camps in themselves, but the company was excellent and just being out was the aim:

Then came the Devon Coast to Coast / Two Moors Way. A project that had been bubbling away on the back burner for a while. Paul had some leave to use up so we went for it. An unsatisfactory wet camp by the River Barle, succeeded by a much better one on Hameldown and one on Quickbeam Hill.

Later that month, I managed to get out for a local overnighter with Colin, and a pleasant time was had camped about a metre above the lapping waters of the River Crouch.

A final outing saw me weather watching and heading to the Lakes on a hopeful mission. A walk across the north western fells saw me camping halfway down Whiteless Pike, before meeting up with Sarah, Dave and Jim for a walk over Seathwaite Fell to Sprinkling Tarn, where I left them to go playing with inversions on Esk Pike, getting one of my own with a camp on Green Gable. The next night was less great at Dore Head, in the cloud, but a nice sunset on Grike on the final night made for a nice end to the trip and the year’s camps.

And so endeth the year’s camping. And I can hear you asking what was the best camp ? Well it’s between:

all of which were deemed Camp of the Year at the time. The inversions and sunset above the clouds on Green Gable wins it though. I feel so lucky to have been there for the experience.

And what of the future ? It seems likely that Rebecca and I will carry our competition into next year, and especially as she’s going on a week-long camping trip to Switzerland with the Scouts. I, of course, have my inaugural attempt at the TGO Challenge to look forward to, and which is likely to define the year for me. I’ve already decided to reinstate the “At least one wildcamp a month” objective, and this will be doubly beneficial in keeping me walking through the winter and maintaining fitness ready for the Big One. I’m also planning to throw in a short trip to Scotland ahead of the TGOC to test out my gear and route choices. Similarly, part of my year-round challenge and preparation for the TGOC will include backpacking in deliberately crap weather – my situation is such that it’s relatively easy for me to wait for good conditions to do a trip, and I’ve become a bit of a fair weather backpacker as a result. I need to calibrate my technique and gear for the more testing times ahead.

This year I broke my annual record with 26 wildcamps and 30 total camps. I think I’m going to need to break it again next year, or Little Miss Hillplodder will leave me for dust. It would also be nice to break my altitude record which currently stands at 866m (a couple of metres below the summit of Blencathra), and my average wild camp altitude of 442m.

PS – All of the artworks featured in this post are available for purchase.

2 thoughts on “The Great Camping Challenge 2016”