The New Year walking trip has now been going since the 2013/14 trip to the Lakes (so the rule says it’s now a tradition), but after that first midwinter foray north, each one has seen me head to Dartmoor. The combination of socialising and easy walks whatever the weather seems to fit the festive lethargy well.

This year I headed down on the 30th, picking Cath up in Exeter on the way. For wreathed the car for almost the entire journey. As is also the tradition, the journey to our base for the trip involves a route over the moor designed to pick off a few easy tors and rocks. This time we headed for Moretonhampsted and then north for the delights of a few bits of stone around Butterdon Hill.

Missing the turning we found ourselves a bit further up the A382 than we’d intended and recovery of our destination involved a narrow country lane, a reverse downhill around a bend due to said lane not being wide enough for two vehicles, and a drive past Willingstone Rock. Eventually we parked up on the verge below Pin Tor and headed up to have a look at the rock.

We were both rather taken with Pin Tor, not least with the big flat patch of grass that could have held several tents, were it not so close to the road and outside the permitted wild camping area. The day was advancing though, so we carried on – back to the car and then across the road to climb through a wood onto Butterdon Hill. We wove our way along sheep tracks to the apparent highest point.

Not really worth lingering so a descent through gorse to the other end of the wood and we emerged on the road again just down from Willingstone Rock. We popped along to bag this one too, lying conveniently next to the road.

Back in the car we drove back along the lane to park below Cranbrook Castle. I spotted a trig pillar, not marked on the map, in the undergrowth and we popped over for a look. Fomerly it used to stand atop the hill, but was moved down to its present location. 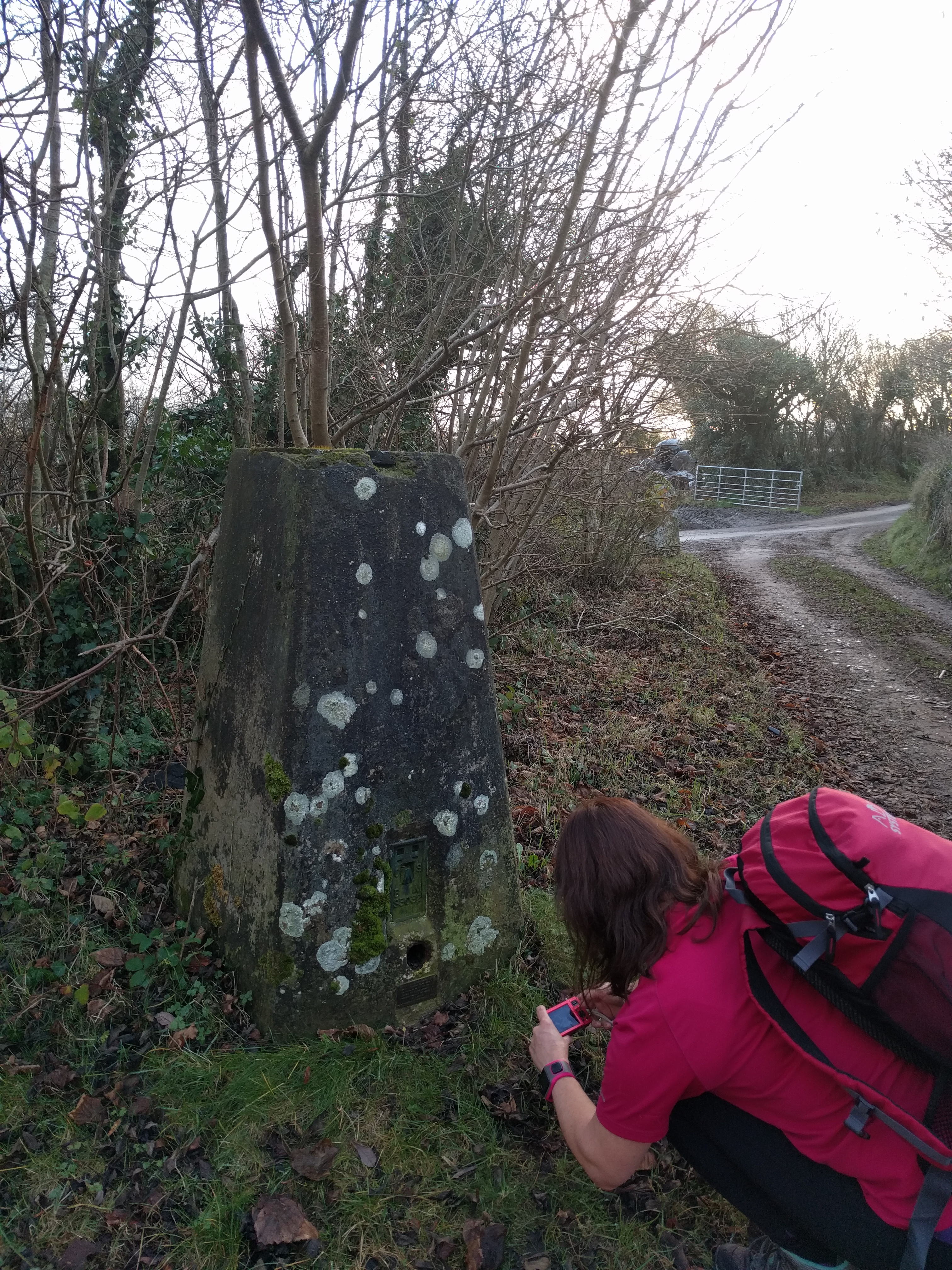 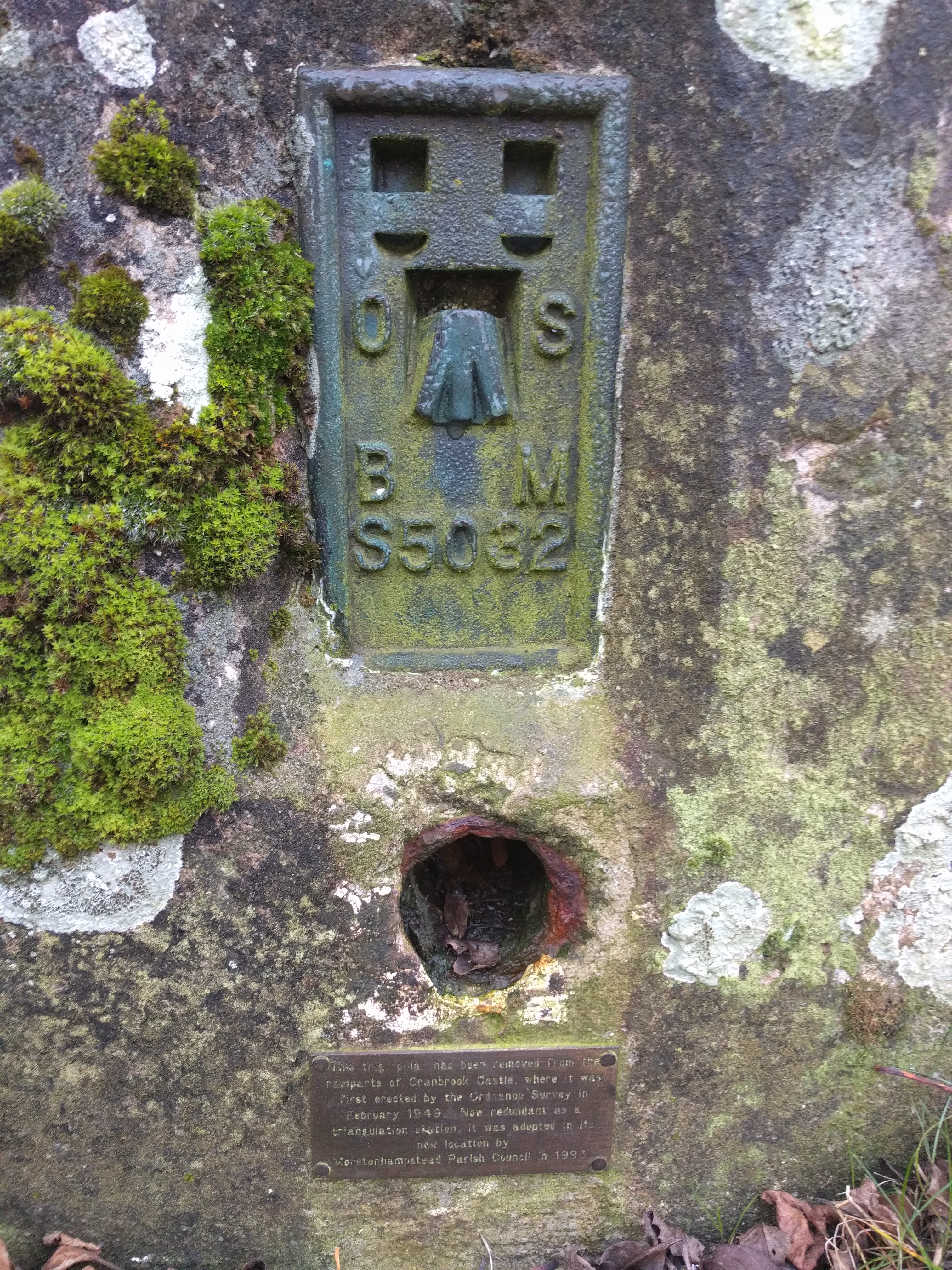 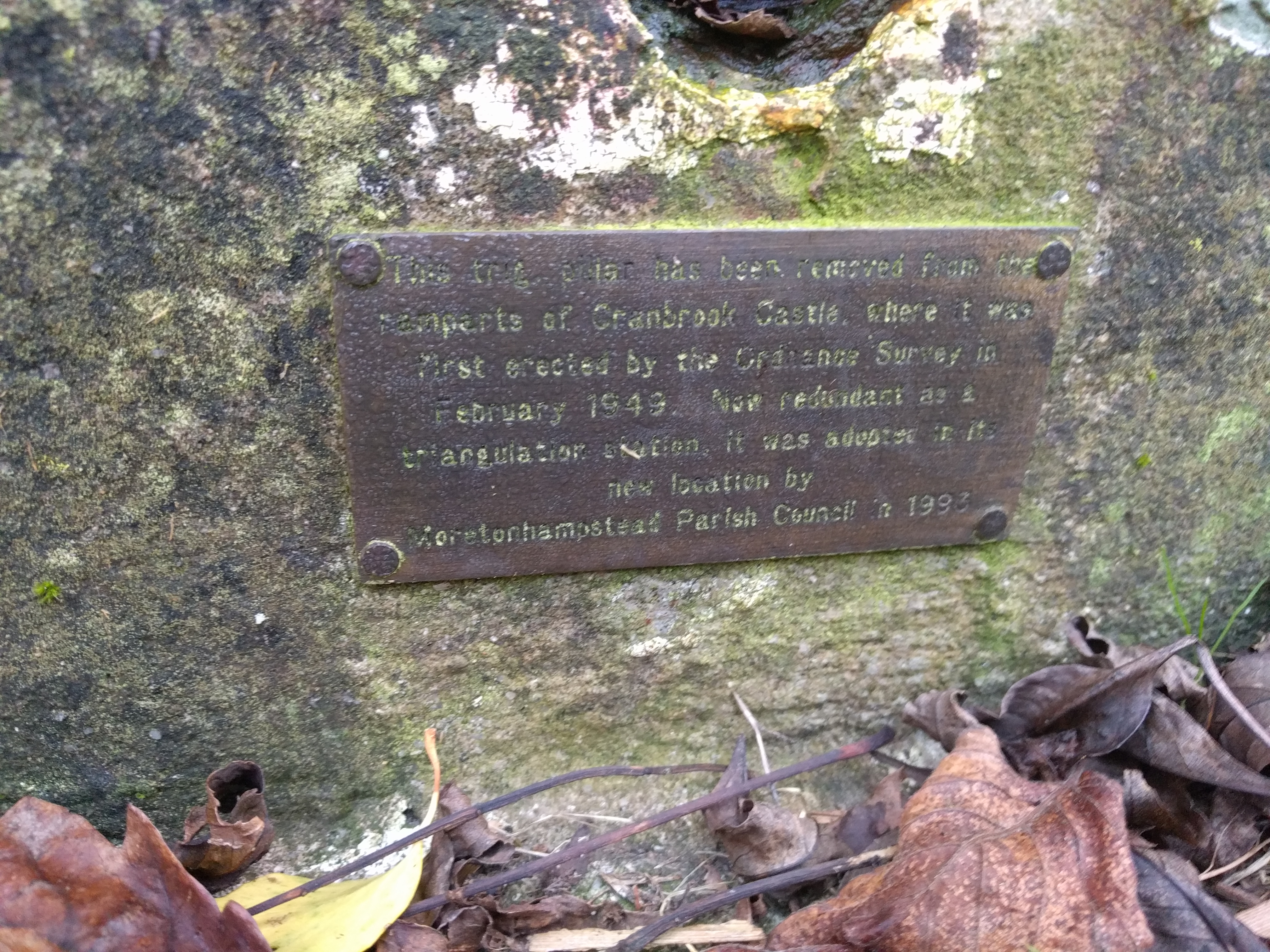 On the hill itself, a mere 5 minutes easy walk, the sun was starting to smear its departing trail of colour over the sky. We lingered a while to see what we could capture of it. 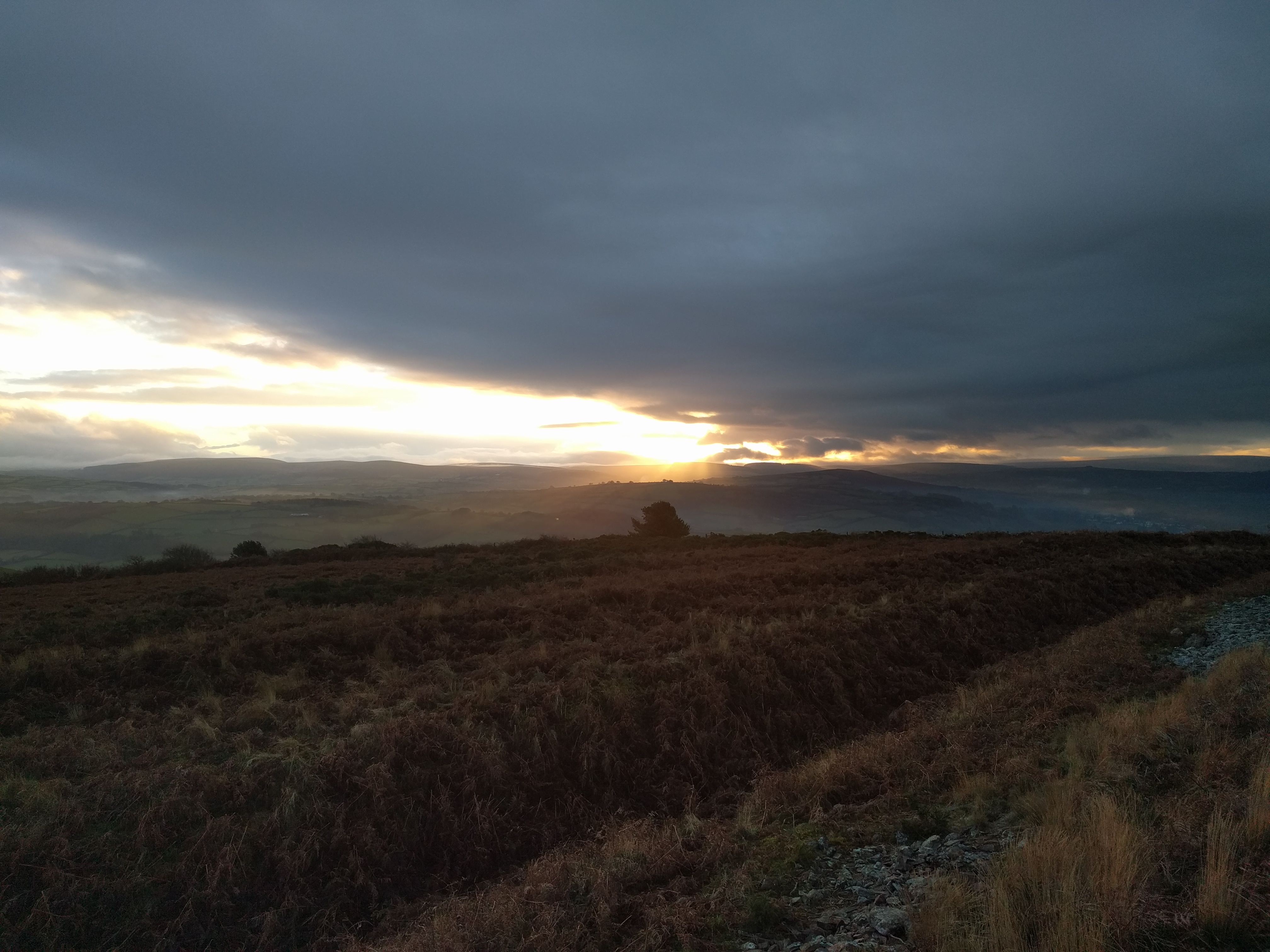 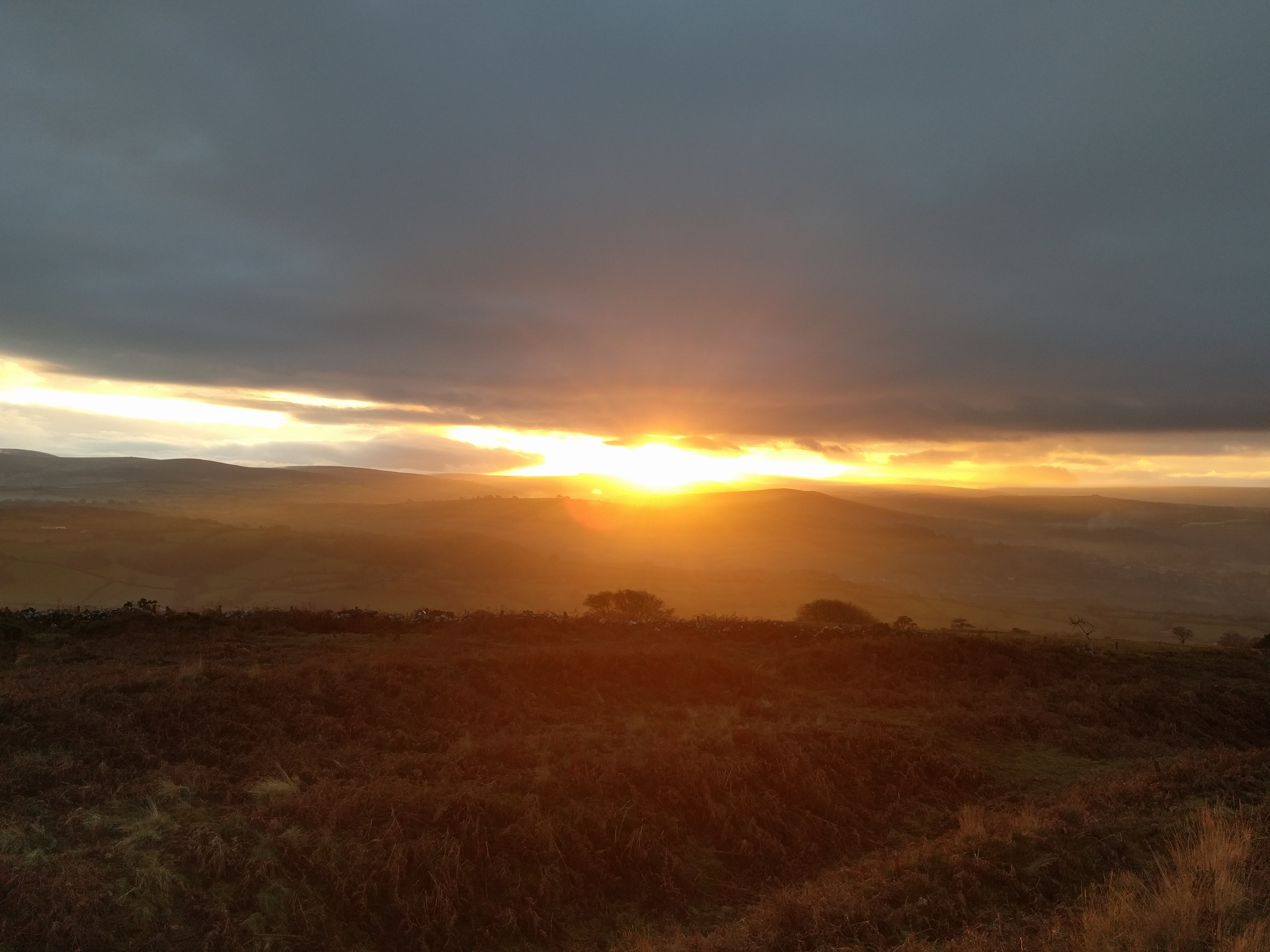 Back at the car we drove over the moor to our base at the Plume in Princetown, fog swirling thickly around the car and reducing speed to a crawl.

2 thoughts on “Another New Year on Dartmoor – Part 1: Butterdon Hill and Uppacott Down”