Cath was safely dumped at Exeter St Davids, Jim was heading home, and Paul and I had a camp planned. The mission was twofold: a camp at a favourite tor, and a return to pick off a rock formation that eluded me last time I was in the area.

We parked up and made our way onto the moor , stopping to talk to a more senior lady who proceeded to enthuse about the Moor, taking us both somewhat by surprise with the phrase “It’s the bollocks”. We didn’t disagree with the sentiment though. The ground was alternately crispy and squelchy as we skirted around the lower slopes of Sourton Tors, making straight for Shelstone Tor. I stopped a few times to take pictures, including of the ice that had collected in puddles, for adding to my collection of abstract photos.

It wasn’t long before we reached Shelstone and we set about exploring it in the search for the optimal spot. Last time I was here, I’d been struck by the possibilities on all sides of the tor, but now we were actually trying to find somewhere the viable spots seemed fewer. We eventually gave up on the hope of shelter from the rocks, and opted for a spot on the south side that still gave us a decent view over the West Okement. It was still a bit early to actually pitch, so we stashed our packs as unobtrusively as possible and set off on part 2 of our quest.

A bit of descent and a lot of contouring brought us finally to the Slipper Stones, which my memories of my last attempt showed I’d probably just stopped short of. I’d never have found them though in the conditions I had that day. Luckily this time I had my local guide with me.

The Stones in the bag, we retraced our steps to camp and set about erecting our shelters. Paul had opted for his Quasar, which although conspicuous was an absolute fortress of stability and warmth. Me, I’d chosen the Hexpeak purely on the grounds of being a more sociable tent – a feature we ended up not using. It was cold and we spent most of the time in our shelters – at one point I was cowering in my inner with every layer I could conceivably put on. It took a fair bit of motivation to leave the safety of my winter bag to start dinner.

Dinner was not a success. First my gas was clearly not flowing down the pipe and out of the holes properly as lighting it proved difficult. When it did light, sparks shot in all directions, a major one chewing the edge of my groundsheet. It wasn’t a huge drama in the vast expanse of the Hexpeak, but may have been in the smaller vestibule of my Scarp, which I’d rather have been in for the warmth. When I finally got my dinner heated up, I wished I hadn’t bothered – it was absolutely horrible. Admittedly it was slightly out of date, but even so my wife had one of these when it was in date and told me afterwards that it too was horrible. So I’m confident it was actually inherently horrible. As usual chocolate and hot drinks came to the rescue.

The new day came, but we weren’t in a position for a sunrise – all we got was a faint patch of light over the head of the Okement. We packed up and headed down. The first camp of the year was in the bag, and so was an elusive rock. 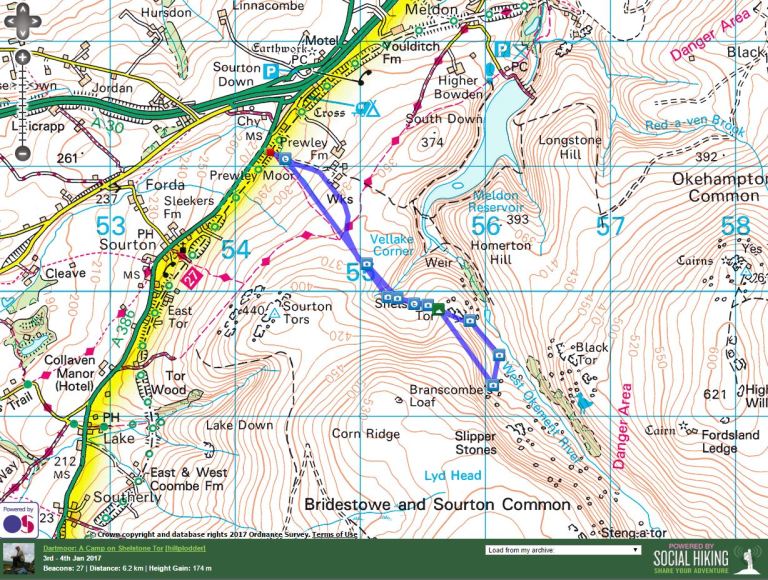 4 thoughts on “Another New Year on Dartmoor – Part 5: A Night at a Favourite Tor”