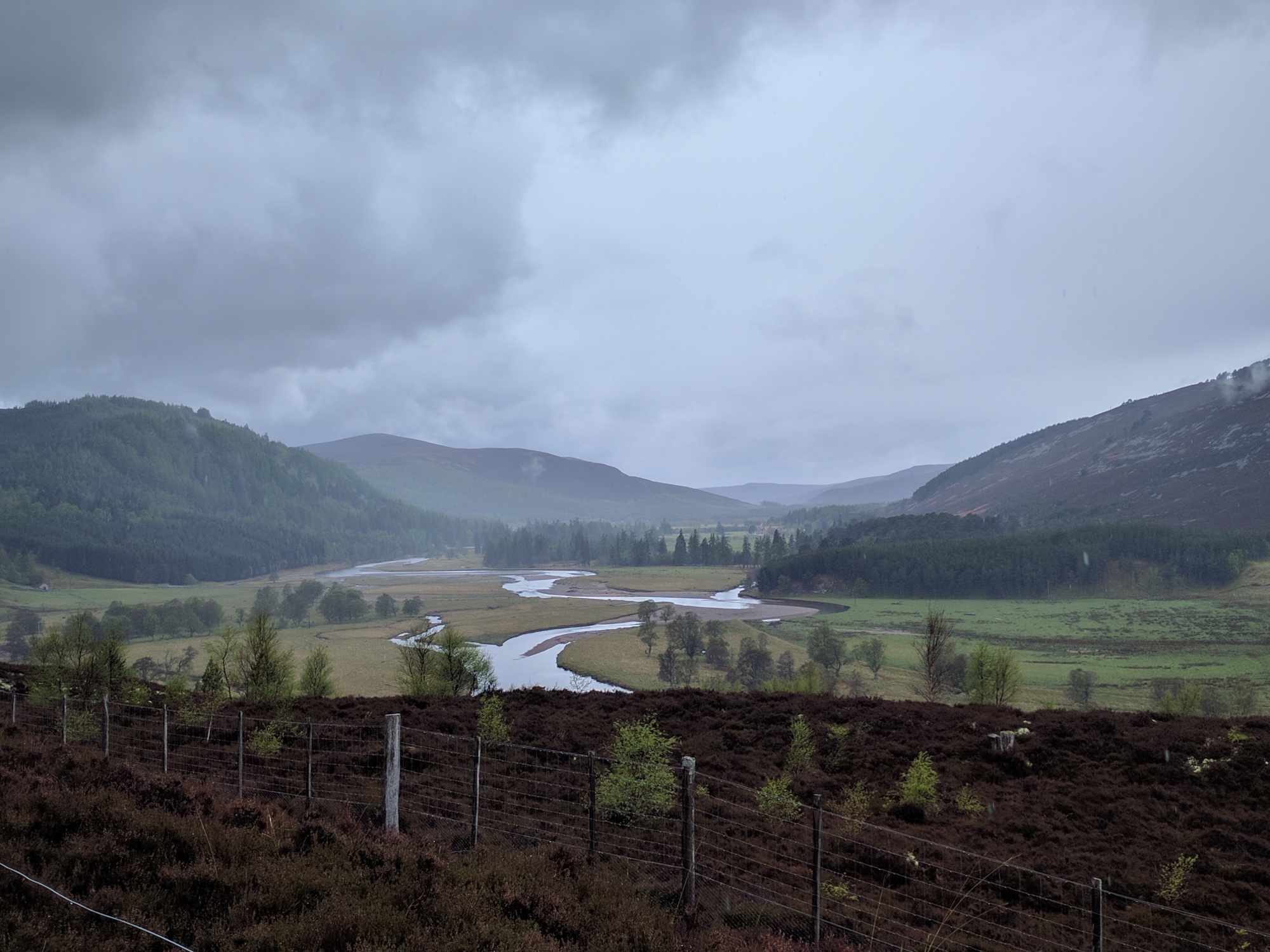 It rains on and off all night which suits me as I’d rather it does it then, than when I’m stood out in it. Monica is sopping, so there’s nothing for it but to detach her innards and pack them separately. We set off just before 9am, and you’d think we had a big day ahead of us. Which we don’t.

We pick our way down the path, Cairn Toul above us looking seriously moody. It’s a straightforward walk into Glen Lui, at least until we get to the Luibeg Burn. By now we’ve picked up Pat and Gill, who were my neighbours last night. It’s a unanimous vote that we’ll attempt cross the burn rather than use the bridge a mere 100m away. Clearly water-based excitement has been lacking from all of our Challenges so far. Dave crosses first and then waits in anticipation for the rest of us to fall in.

We’re at Derry Lodge for elevensies and take it on a fallen tree trunk. The compulsory brew is had, it being now my turn to make it. With light rain falling we head off and catch up a DofE group out on their Bronze expedition. Dave seems to have acquaintances in common with the accompanying teachers and so we’re nattering a while. But then we’re off again and following the welcoming signs that lure us into Mar Lodge.

I don’t know if it’s the effect I have, but all of the people there when we turn up make a swift exit. This just means more biscuits for us though. Or at least until Peter Jordan and his mate Jack turn up and polish them off. It’s a long stop as it’s still raining and the reluctance to go back out is strong. We cross the river and begin the road walk into Braemar.

The road walk passes in a rapid blur and it’s no time at all that we’re in Braemar and piling into Gordon’s tea room, which has been signposted from pretty much Victoria Bridge. We’re unlucky with our timing though as we get the tail end of the lunchtime menu, albeit with a beer, whilst Pete and Jack rock up a little while later and by then it’s evening menu time. Bastards.

Dave is staying in the hostel, but I’m undecided what to do, so I delay the decision with some shopping for provisions and acquiring another gas canister. We walk out towards the hostel together and I leave him there, deciding to try my luck at the campsite. If there’s room I’ll stay there, if not then I’ll carry onto Callater.

There’s room. My tent goes up in a space near another Scarp. A few tents are recognised. Most of the crowd disappear to the pub, and I lounge in the tent for a while – part of me just feeling like chilling out at the site. But, I soon realise that with my route this is the last real chance for a bit of social before I get to the coast and I ought to make the effort. I duly head for the pub, bumping into Dave on the way. There, people are grouped in little clusters and I latch onto Mike who I’ve not seen since Cannich. His plan for the next couple of days is similar to mine and so we hope to see each other out there.

Dave and I both tire of the pub and decide to head back – I’m keen for an early night, and want to check over my plans as I’m now a day ahead of schedule due to the shortcut through the Lairig Ghru.