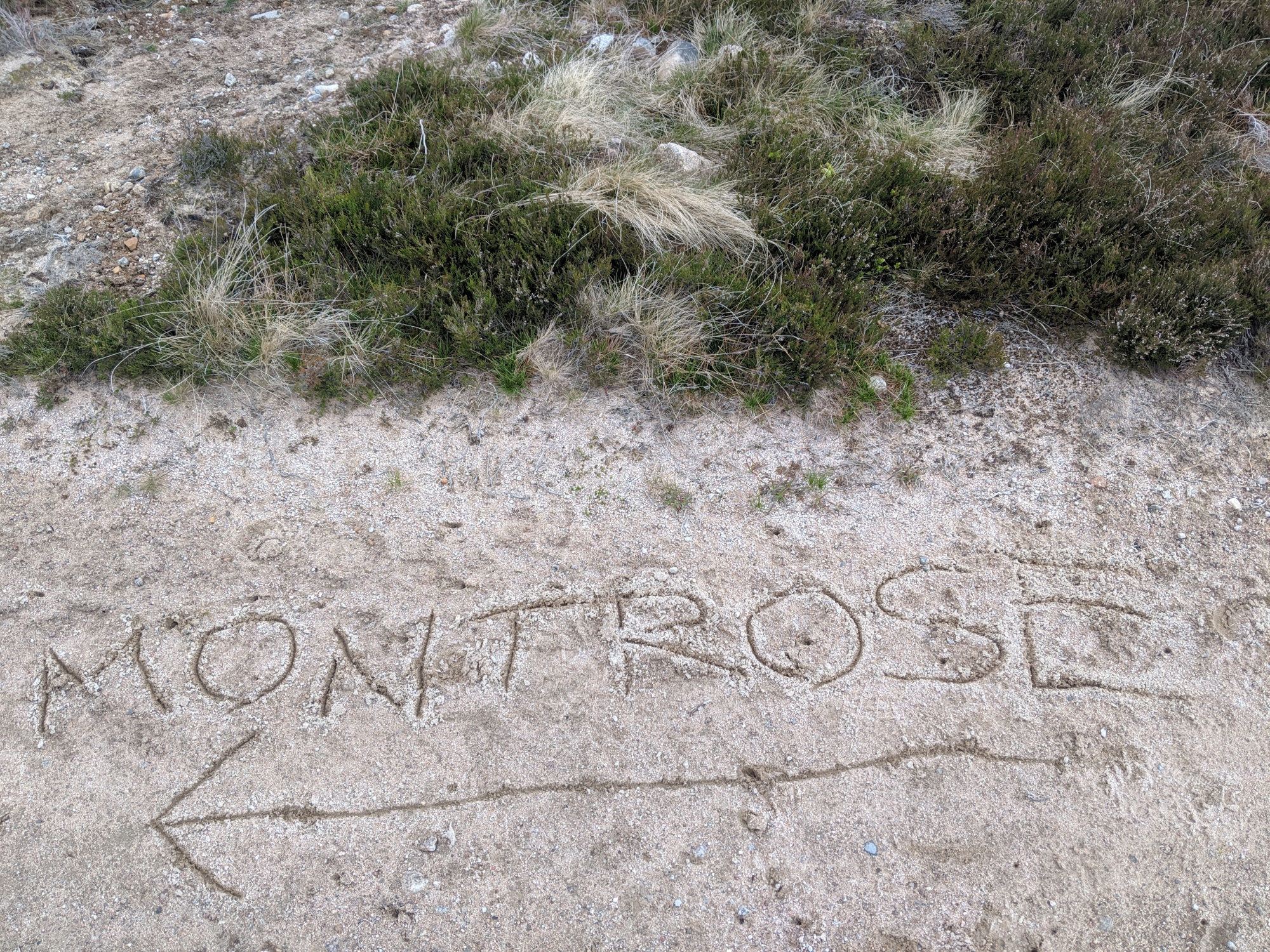 I’m technically late with my “phone-in” again, but I was supposed to phone in Tuesday (from Clova) and then again from either Forfar (on Wednesday) or Brechin (on Thursday), depending on route taken. So it seemed like a good idea to split the difference and combine them in one Wednesday “phone-in”.

This post covers days 11 to 13 – a weird few days that both determine when (and even if) you will get to the coast, whilst simultaneously transitioning from serious terrain to lower and more certain ground. It’s the time when you become committed to your final route to the coast – in my case as early as day 11 on my first Challenge.

Leaving aside the short-lived travails of the odd challenging high day earlier on, or the illness that dogged the middle part of my 2018 crossing, it’s days 11 to 13 that seem to be hardest for me. I alluded to this in my previous post, but let me expand further. It’s safe to say that whilst many approach the Challenge as a great holiday, for me there is still the element of psychological challenge itself.

In 2017, my first Challenge, I got to Braemar on day 9 (a day ahead of schedule due to taking the Lairig Ghru rather than Feshie) and all I could think about from that point forward was getting to the coast. I wasn’t in a hurry as such but was fixated by achieving a finish. I’d bailed so many walks at about that point, that having reached Braemar (which I’d told myself would be the point at which I’d “know” I’d finish), I just wanted to make certain of this one. My head wasn’t in the right place to do a lot of socialising.

Day 10 then deposited me off course – in Glen Isla rather than Glen Prosen (or the hills above), and forced a re-think. Overnight there was much mulling of options (and being one day ahead just complicated it further), and the net result was that I got up on the Monday of day 11 with one fixed aim – to finish, and it didn’t matter how.

Once I’m off the hills, I’m off, So there were no thoughts of climbing back up and prolonging the high ground.

So day 11 became a day of walking down Glen Isla. I was out of my way but “safe” in that the most perilous thing ahead of me was potential road traffic. I knew I could handle everything in front of me. I knew I would finish.

Fast forward a year to 2018. Day 11 at least saw me wake up where I’d planned to be – Ballater. But given that I nearly called it in Braemar the morning before, that was something of a miracle. It was only really due to the company of Louise, Emma and, for the first part of the walk, of Lindy, that I made it.

Not having been well, and still unsure what the actual problem was, any thoughts of following my planned route over Mount Keen to Tarfside were out of the question. It was to be my FWA of a walk down the Dee to Glentanar and cut across to the Fetteresso. It was the right choice under the circumstances, and even if I’d made it over Mount Keen, I’m not sure I could have handled Tarfside that year.

Being not 100%, and now being committed to a lower route, all thoughts were again just focused on the coast.

Day 11 actually restored me in many ways. I bumped into Graham Taylor and we fell in together for the rest of the day as our routes effectively coincided. Then we bumped into Emma and Louise again a few times. Once again company saw me through.

Day 12 and I accompanied Graham down through the Forest of Birse to the point our routes diverged just before Strachan. A day that ended in frustration over camp spots.

Day 13 got me to the Fetteresso and really sorted me out. A much more relaxed and confident day. The desire to make the experience last came back, albeit much too late to be able to do much about it.

2019 came, and for the first time I was part of a team. I expected the dynamic to be different. It was.

We got to Braemar for day 10 as planned, but conditions were such that we found ourselves on our FWA by way of Gelder Shiel the following day. Nothing too bad, but just enough to make the effort of scaling Lochnagar a pointless endeavour as there would be nothing to see as reward for the work. It wasn’t that bad, but both Paul and I whilst walking through the Ballochbuie Forest seemed to sense a change in motivation. All talk was of getting it done.

For Paul, this was principally because the bit he wanted to do (the Monadhliath) was behind him. For me, it was the old day 11 thing raising it’s ugly head again. We decided to take it as it came, but deep down both knew we weren’t going to be spinning this out or adding extra high ground. It would take as long as it took to get to the coast, but no more. I as really flagging that day.

The heavens opened on our way down to Glen Muick and we sought some shelter early. Spirits were pretty low and thought was given to walking out to Ballater the next day to avoid going over the high ground. This was just a knee-jerk thing though, but it shows how close it’s possible to come to a bail out decision in even just the most marginal of adverse circumstances.

In the end we decided to break the following day into two and just take it easy. That way we would avoid putting ourselves in a position where snap decisions might mean the end of the walk. We could afford to do this by committing to a FWA later on in the walk, cutting off a day’s walk over the Hill of Wirren ridge, which neither of us particularly cared about anyway.

The next day to Stables of Lee had it’s testing moments – finding a way to cross a rather wide burn without getting too wet, not to mention the final obstacle of the fast-flowing Burn of Badrone right across the track. An early finish and lazing in the sun sorted us out.

Day 13 saw us do the short walk down to Tarfside, arriving a day after the hordes. We were back on track, and moreover into the land of certainty.

So there is a definite pattern, although the precise timing varies slightly depending on the route. The first day out of Braemar has invariably involved some sort of mental challenge. Indeed the mere fact it is the day out of Braemar now seems to have become the mental challenge itself. Maybe it’s just a natural point in the walk where fatigue sets in. I guess, at least I know it’s coming.

There’s then a period of adjustment lasting a day or so where the shape of the rest of the route firms up, and final decisions are taken about timings and routes. Only when those decisions are made and I know exactly what I’ve got to do and on which day, do I seem to relax again and let things happen at their own pace.

I’m sure some will say I’m overthinking this, and I should just relax and enjoy the moment. I wish I could, but I can’t, it’s ingrained in me, and probably because I’ve spent the last 20 years trying to turn uncertainty into certainty for my job.

The thing, though, that has helped me approach this period of the Challenge better is my memory of my finishing experience in that first year. Finishing two days early and then wasting the rest of the time, has very much motivated me to use the time sensibly. That means handling the post-Braemar blues, and quenching the lust for the finish that grows with every step out of Braemar. I’m getting better. I think part of the solution is in the increasing sociability of the latter part of the Challenge. Company takes my mind off things and I’m much more content to just let things take their course then. But at the same time I do have to avoid getting so much company that it’s overwhelming. I don’t like crowds. So for me, the strategy has to be to stick to “trade routes” towards the end, or embrace the desire for the coast on a route where pushing for the end is actually a useful thing.

So how would things have played out on this year’s real route ?

I would have met up with Paul in Braemar, or maybe before. So we’d have been leaving Braemar together no doubt. The forecast would have been good, so banishing one potential factor. Our routes were due to temporarily diverge at Lochallater – Paul for Jock’s Road, me for the Munros to the south. Whether I would have headed up would largely have been a factor of whether I’d done many already, how I would be feeling physically and whether I preferred company at that point. I’d like to think I’d have made the push for the tops given the weather conditions.

In any case, Paul and I would be due to rendezvous at Clova or between there and our planned joint camp spot that night. We’d then be together for most of the next couple of days, only separating for the final stretch to our different end points. That would probably have seen us through any ups and downs head-wise, as it has done on several walks together. I was particularly looking forward to my finish at the south end of Lunan Bay, so the fact that would have been solo wouldn’t have been a problem.

So 2020 I think would have been ok. The planning of the whole crossing to intertwine with those of Paul, Darren and Jason for all but the final few days would have stood me in good stead. It remains to be seen how this plays out in 2021.

These aren’t strict days 11 to 13 images, but images of that weird period mentally immediately after Braemar, so actually cover days 10 to 13.