A walk of about 7 ½miles involving about 750m of ascent, this can be fitted into an afternoon.  In clear weather there should be good views down to Ambleside and over Windermere, and also down into Patterdale.  For a longer walk on a full day, there are several options for extension.

What this walk means to me

Arriving in the Lake District just over three weeks since my last trip, even after so little time I really needed the break because of an incredibly stressful project at work.  After checking into my B&B I headed for Red Screes, a walk that defeated me the first time I tried it in 2006 (took the wrong turning).  It was absolutely spot on as the warm up for the rest of the week, and yet again a fell I hadn’t thought much of surprised me.  Great views, an easy walk up the ridgeline, a tarn on the top – it has all the ingredients. 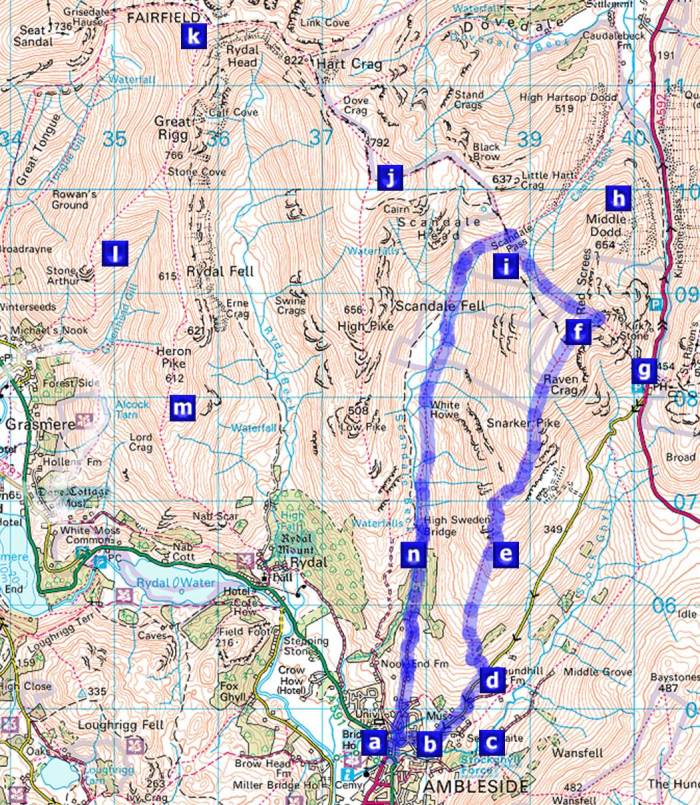 Leave Ambleside from the Market Cross (a) taking the road signposted for Kirkstone Pass.  Follow the road (b) gradually gaining height alongside Wansfell to your right.  A worthwhile detour on the way is Stock Ghyll Force (c) – simply follow the signs.  Eventually at about 220m above sea level, cross the road (d) and take the footpath on the left which winds between the dry stone walls, gradually pulling up the long ridgeline (e)

The path heads straight to the summit (f) where a tarn also sits.  If the weather is clear there should be good views over the edge towards the Kirkstone Pass and the Far Eastern Fells.

From the summit there are 3 main options for the next bit – a descent straight down to the Kirkstone Pass Inn (g), the walk down the north of the ridge to Middle Dodd (h), which is what I actually did on this walk.  If you’re luckier than I was you should get a closer up view over Brotherswater.

The third option is to take the path that descends north west down to the Scandale Pass (i).  Once at the pass, another decision is needed.  It’s quite possible to extend the walk up the other side over Little Hart Crag and up onto Dove Crag (j).  From here a descent over High Pike and Low Pike will bring you back to Ambleside.  Or you could go further and from Dove Crag continue up onto Fairfield (k) and Great Rigg.  From here two options bring you down to the road – first the quick route over Stone Arthur (l), a good viewpoint for the views of Alcock Tarn in walk number 2; or a longer route over Heron Pike and Nab Scar (m) to Rydal.  In both cases a bus will get you back to Ambleside if you’ve had enough walking.

But my walk actually descends from the Scandale Pass directly through Scandale itself.  Early on it can be wet with a lot of detours around puddles and bogs, but this doesn’t last long and becomes a straightforward walk down a stony path.

As you pass by trees near High Sweden bridge (n), the sound of rushing water will accompany you – from the streams and, in the distance, a waterfall.

The path becomes a track and then a lane down into Ambleside, entering behind the pubs at the top of the village.

One thought on “Red Screes and Scandale”