Today the Olympic torch arrived in Plymouth and I left town. Not that I am trying to avoid it, but I do have a long distance path to walk…

Day 1: Saturday 19 May – Plymouth to Crafthole

Poppy’s Guest House turned out to be ok – at least at a price of £50 for two. Not spectacular mind, and with no fruit at breakfast (sorry I don’t count bananas which I can’t stand anyway) it lost some points. The full English was big though which was probably a good thing given how far I had to walk. I packed up and headed out onto the Hoe.

With The Torch passsing through today there was a lot going on on the Hoe. Some sort of concert was being set up and as I walked past the burger vans and ferris wheel blasts of music came fandomly from the stillness. I weaved around the crowd control barriers to Smeaton’s Tower where we’d finished last year. 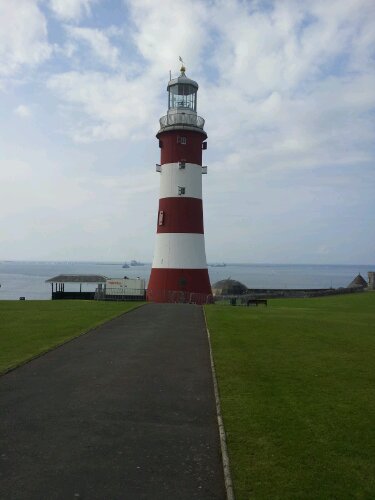 Patches of blue were emerging from behind the cloud and it promised to be a fine day. I ambled along the Hoe and down to the SWCP simply enjoying the day and not being at work. A largely unremarkable wander through the streets around the docks and marinas brought me to the Cremyll ferry where I waited for 20 minutes having just missed one. 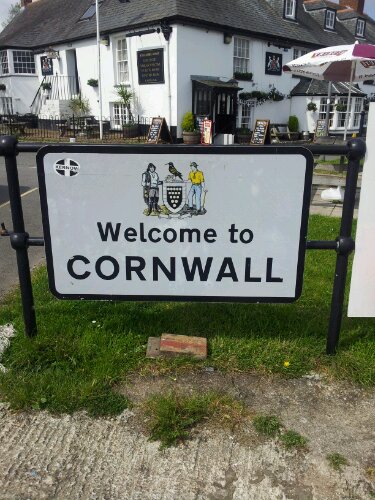 I walked up the slipway on the other side and I was in Cornwall. Now on the Mount Edgecumbe estate there were plenty of people about, the weekend tourists supplemented by a big group of teenagers with enormous bulging rucksacks and huge sleepmats in bin liners strapped to the outside. Yes, they were a DofE group. As I walked past they splintered into smaller groups of 3 or 4 and I hurried along not wanting to be caught up in the traffic.

Feeling a bit self-conscious using Pacerpoles on gravel tracks through manicured grounds, I got on with the walk and was happily into woodland soon after. Various people from the ferry were overtaken and DofE groups were heavily sprinkled along the path.

A slog uphill near Fort Picklecombe was immediately followed by a descent of all of the height that had been gained and then everything opened out a bit. A largely flat path saw me build decent pace and I started to get into the walk and to enjoy the day.

As I approached Kingsand a group of Nordic walkers passed the other way and their leader then stopped me to get me to show her class the Pacerpoles. Finally dismissed by teacher I walked a little further and found a spot for coffee just before the village.

The flags and bunting were out in Kingsand and Cawsand and there were plenty of people about. Briefly tempted by the pub I carried on to Penlee Point where the first rocky view of seashore emerged. This was also the last point where there was a clear view back to Plymouth. 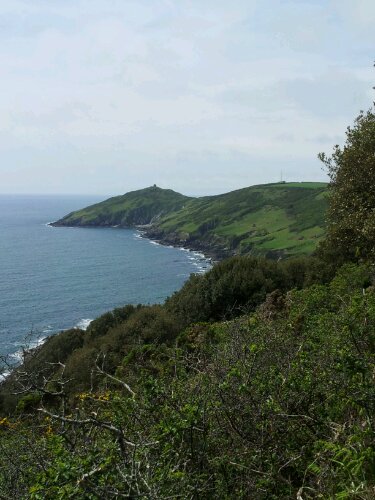 Along the clifftops to Rame Head where I divertsd from the path to visit the Head itself and then took my lunch stop on the hillside overlooking the rocky shoreline of Western Gear.

Now nearly 10 miles into the walk tiredness was starting to creep in and what you do.’t want at this stage is a long stretch of tarmac or constant up and down. Both were to be ahead of me.

It was now quite warm and I rued the decision to not bring shorts. My temperature wasn’t improved by Wiggle Cliff. Aptly named as the path meandered up and down through the chalets dotted about the hillside coming teasingly close to ths road above and then plunging down to nearly beach level. The path climbed up on the final stretch to the road and I took refuge on a bench. 12 miles done and I was dead on my feet.

I couldn’t sit there forever though and resumed, gaining the roaad and then detouring to the caravan park for refreshments. Then I slogged along the old Militart Road to Tregantle Fort. I decided to stay with the permanent route along the road at the top of the fort as I knew the road would take me straight to Crafthole and my overnight stop.

The last stretch of road walking on a day’s walk always seems long and this was no exception. Thankfully the sign for the pub came sooner than expected and I was soon in my room.

Dinner was a quiet affair with me and Mine Host comprising all of the people in the bar. A couple of pints of Cornish Buccaneer and a steak sorted me out for the night.