Being the hostelry I’d visited for a restorative lunch on the day in 2008 when I decided what my final fell would be, it seemed fitting that I should mark the completion of the project in The Bridge. I sat in the pub with a pint and a pie and whilst taking advantage of the free wifi to get the trip photos onto Flickr, was otherwise at a bit of a loss. All too soon, the bus was taking me into Keswick, which I walked through with some distaste – it was crowded with weekend shoppers and tourists and I was tripping over dogs everywhere. There was nothing for me there this time. I waited the time before my next bus and headed away without a second thought. 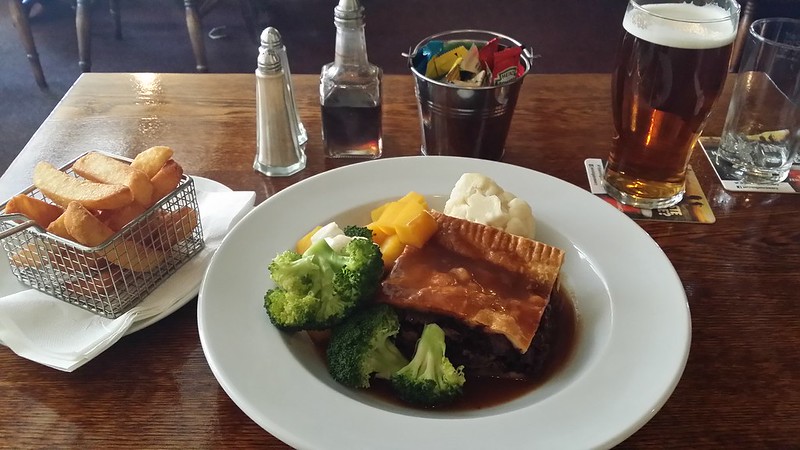 Usually when I head home after a trip, my feelings are a mixture of regret and relief. Regret that the trip is over and I have to return to normal life; relief that some creature comforts aren’t far away. This time though, there was nothing – just a sort of numbness. I was neither reluctant nor keen to get home. It was just simply time to go home.

It took me over a week to unpack from the trip, which is exceptionally bad, but I think I was in part afraid that doing so would spoil the magic or lead to regret that it was all over. Finally I unpacked, started on the blog write-up and eased myself into the next few months of work.

Deliberately not wanting to think about what I would switch my attention to after the Wainwrights, I’ve spent the last three weeks in a continued state of disbelief that it’s over. But it IS over and I’m now starting to let myself dwell a bit more on the abiding memories of the project. So I thought I’d share a few of these.

The lowest moments of the project all happened on one trip in April 2007. On the very first day of walking, I took an entire morning to climb up the Walna Scar Road, overburdened by a stupidly heavy and large pack. I was shattered when I stopped for lunch on Brown Pike. Every step that afternoon was hard work, and made worse by the creeping realisation that I wouldn’t be able to do all of the Coniston fells I’d intended, let alone get all the way over into Langdale for an overnight camp. In short, I’d vastly underestimated the rigours of what was my first backpacking trip. The day ended with a taxi to Ambleside from the Three Shires, an emergency B&B, and a complete revision of the plan. And of course, the whole day was subsequently invalidated for my carless round, although at this point I hadn’t yet decided to make it carless.

Later on that trip, I found myself struggling up to High Spy in wet mist and abandoning the plan to walk to Keswick over Maiden Moor and Catbells. In poor visibility, a lot of floundering around in the area of Dalehead Tarn before I found the way down to the valley.

Two days later, almost the same experience saw me walking in circles on Ullscarf and abandoning the attempt on that summit only to find myself lost in a misty quagmire at the bottom of Mere Beck at the top of Far Easedale. That was probably the lowest moment of the whole round – a real “I want my mummy” time, as I sat on a rock and felt sorry for myself in pounding rain.

But you know what, I got myself out of all of these upsets, and learned from them. In particular, my awareness of how far and hard I can walk when laden for backpacking, my navigation and hillcraft.

There have thankfully been relatively few instances of getting lost, at least properly “I haven’t got a clue where I am” lost. There have been numerous instances of taking a slightly wrong line or path from somewhere and having to recover, but no huge howlers like ending up in completely the wrong valley. Well not since the day I got introduced to Easedale Tarn instead of Stickle Tarn!

For proof of how these lessons have been learned and things have improved I only have to look to subsequent trips – a highly successful 10 day backpack all round the Lakes in 2011, the Cumbria Way, and some of my more recent exploits wild camping on the fells. Of course there have been poor days, mostly due to manky weather, but these have all been coped with and sensible decisions taken about what to do and when enough is enough.

Let me start by saying that the highs massively outnumber the lows – so much so that it’s really difficult to boil it down to a short list. So let me reflect on a few of the more obvious ones.

The first of these would be in August 2007 when I escaped from a week’s family camp in Langdale for a solo day on the fells. A walk to Bowfell, via the Great Slab, then Esk Pike and a return to the valley was all it was supposed to be. But I was going so well that I extended to Great End and Scafell Pike. This was probably the best day’s weather I’d had in the Lakes to date and I just remember the views were stunning.

The day I was introduced to the fell that would be my favourite until the very last day of my Wainwright round saw an almost perfect set of conditions, terrain and timings. A scramble onto Seathwaite Fell, loads of tarns including the magical Sprinkling and High House Tarns, the rockiness of the many tops on Glaramara, I could go on and on. A hard day’s walking, but one where I learned the satisfaction that could be got from a day when you have to work harder than you’d like.

The week in July 2010 that introduced me to Eskdale will always be memorable. After a few days walking in from Silecroft over Black Combe etc, I switched my attention to Scafell and then on the last day of the trip to Hard Knott, Harter Fell and Green Crag. I fell in love with this part of the Lakes, and the time to reflect that this remoter part of the National Park gives you. Eskdale remains a favourite area.

In 2012, my first wildcamp of course ranks among the highest points of my round. This opened so many doors for me – especially the ability to access fells I couldn’t do on a day walk without a car, and the ability to leave arranging a trip to the Lakes until a few days before when I could be more certain of ok weather.

The following year I did my first winter backpack, camping high a couple of nights and doing a lot for my confidence alone on the hills in challenging conditions. The photos I took on that trip remain some of the most memorable of the last ten years walking.

And I have to include my final trip in the top experiences. My loose plans, tailored neatly around the weather, gave me some great high camps and views and a memorable 24 hours as I approached and completed my Wainwright round on Haystacks.

The eagle-eyed reader and anyone who is currently stalking me will observe that all of the above best moments were solo ones. That’s not to say that I haven’t enjoyed company on the fells – I have – but it’s the solo walks and having to fend totally for myself that stick in the mind. Indeed 203 of the 214 fells have been done solo.

Memorable walks with company include the 10-in-10 last year (although because of drop outs and my pace, that ended up being virtually solo), and the walks I’ve done with Cath (@wellycath) over the last couple of years as she introduces herself to the fells. These walks have offered good excuses to revisit fells I’ve not been to for a while too.

Almost the first thing people ask you when you finish the Wainwrights is “What are you going to do next ?”. Half the time they don’t even really listen to the answer – it’s a standard question that seems to automatically issue forth from people’s mouths. It’s a bit like when a friend has a baby, everyone automatically asks what time it was born and how much it weighed. Because that’s just what you say in that situation.

It’s not just other people that ask this question – as you draw inexorably close to the 214th fell, you seem to find yourself asking the question too. No matter how much you try to focus on finishing the job in hand, stray thoughts still manage to creep in during unguarded moments. And so it was for me as I approached Haystacks. Would I do another full round ? Would I switch my attention to the Outlying Fells or to another area completely ? What about Dartmoor, which has quite rapidly become a bit of an obsession ?

So far the ideas in the pot consist of:

When I finished, I told myself that I wasn’t to rush off straight into another project, and should take some time to think about it, and being someone that has an idea and wants to immediately get working on it, such thinking can be highly dangerous.

Although I’ve got plenty of ideas, no one idea has yet forced its way to the forefront of my thoughts. This is actually quite handy, as the comings months see a switch back to a more work-based programme, and telling myself to not think about the next walking project becomes a lot easier when the prospect of being able to get to the fells is so diminished. It will be impossible not to find myself thinking about it, but I’m content to let thoughts coalesce in their own time.