The taxi dropped me at Grasmere Youth Hostel, my wallet lighter to the tune of a pony. It was either that or a long wait for a bus. A quick check-in and then a squelch around the lawn in the dark to find a suitably dry spot to pitch the tent. Matilda went up relatively speedily, I threw my stuff in as quickly as I could, but taking the precaution of blowing up my mat and laying out my sleeping bag right now – who knew what sort of state I might arrive back from the pub in.

I legged it down the road into Grasmere and along to Tweedies. Gina (@CumbrianBlondie), Dave (Kendalskintcake) and Cath (@wellycath) were a bit ahead of me in the drinking stakes, so I tried hard to catch up. A bit too hard really.

I paid for it next morning though, feeling queasy at breakfast and generally lethargic for the first part of the walk. About the only bright spot was me remembering that I’d left my burner for my stove at home, precipitating a wander into Grasmere on a quest to find one. Whilst annoying that I’d left it behind, a least I’d realised when I did. (It also turned out to be a blessing in disguise- the shallow burner meant a wider flame and nearer the pot, and much reduced boil time).

Eventually we headed up the road towards Helm Crag, pointing out the sights from the last time Cath and I walked this way. Sour Milk Ghyll was in fine form, water creaming down the hillside.

The climb up to Helm Crag was short but sharp, and we found ourselves being overtaken by pensioners, but we finally made it to the top. Neither of us fancied the Howitzer today, so we touched the rock and headed onwards for our next target – Gibson Knott. This was straightforward, but what I was really looking for was the rock against which I nodded off in 2008. 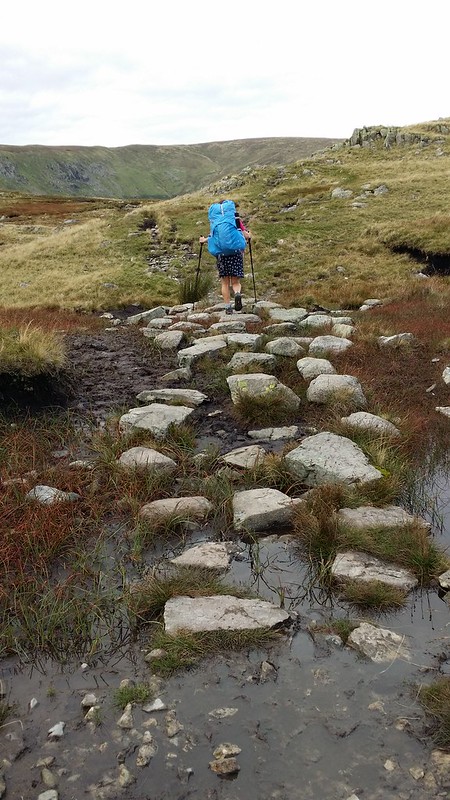 We headed on up to Calf Crag and then took stock of the situation. Progress wasn’t that fast, and a decision was made to just head up to High Raise and not do any of the detours suggested. We crossed Brownrigg Moss and somehow managed to cross the main path up to Greenup Edge. Never mind, that gave the opportunity for a more intrepid route.

We walked steeply up the grassy hillside alongside Mere Beck, taking the opportunity to fill up with water for camp as we did. Tarn after tarn appeared, making it obvious why the fell is so called.

Codale Head appeared and we stood atop it for a good look around. Close by was Sergeant Man, this being probably the most impressive view of it. Ahead, we could see High Raise – a simple matter of a gentle ascent across grass. We got on with it arriving on High Raise at the same time as a couple who were also clearly kitted out for a wild camp. Both sides seemed to be deliberately dithering and there was much show of looking at all of the views and the deer I’d pointed out below. It was clear everyone was waiting for everyone else to clear off so they could pitch nearby. A giant crow circled over the area, waiting to see who it was going to eat tonight.

Tiring of the game, we headed a short distance away from the summit, found a patch of grass and stuck the tents up. A pair of Hexpeaks being slightly reminiscent of Madonna’s bra.

The sun sank lower in the western sky, a burning flame searing the tops of the fells. The temperature dropped and we settled in for the night. A beer-less night too, neither of us feeling up to imbibing after the shenanigans of the previous evening. About 9pm voices were heard and lights bobbed towards us, but they veered away when they saw tents already in place, leaving us to a peaceful night. 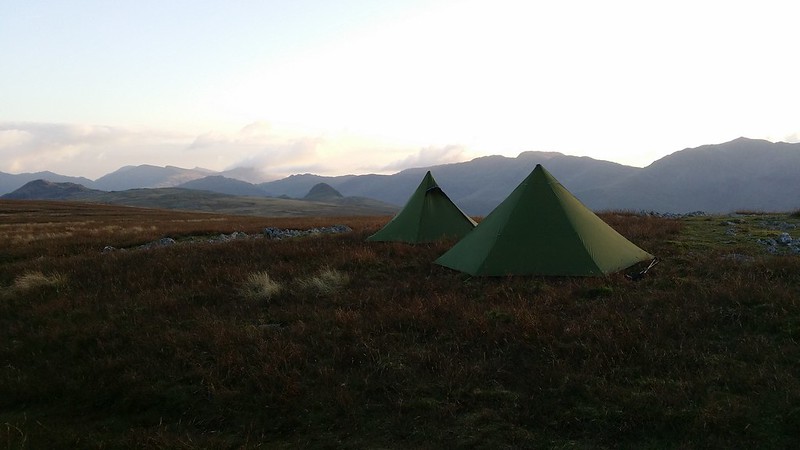 Light crept into the tent and jolted me awake. I emerged to find myself looking straight into the face of a sheep – I’m not sure which of us was more startled. It was light but the sun was only just breaking over the eastern fells, so I wandered around a bit trying to get everything in the right place for some pictures. 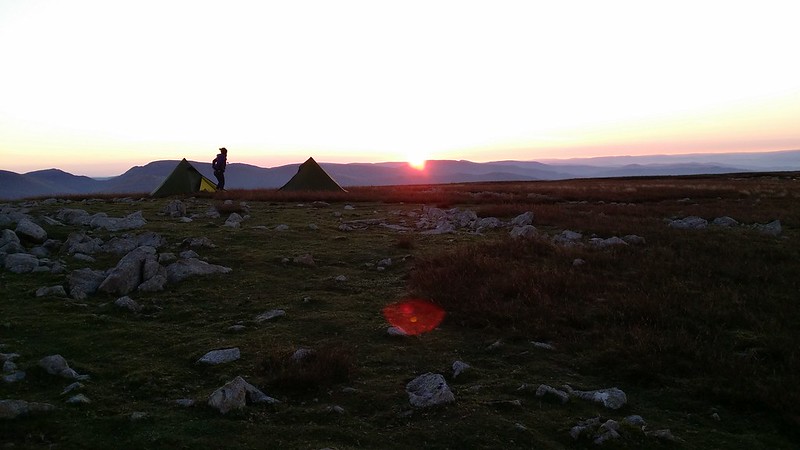 Soon it was blue skies and as we set off towards the Langdale Pikes, we were sweltering in the unnecessary layers we’d put on in the cold light of morning.

First up was Thunacar Knott, an easy walk to a vantage point to decide which order to do the rest of the fells in. And here a decision – to do the route as planned down over Blea Rigg and Silver How to Grasmere, or the newly-raised controversial choice of sodding it and just heading down to the ODG or NDG. The latter won out, and so we picked off the Pikes, starting with Harrison Stickle.

Views were opening up all around us, there was virtually no wind and it was developing into a perfect day on the fells.

We trotted over to Pike of Stickle, dumping our packs at the bottom and scrambling up to the top. After several trips of looking at (and giggling suggestively at) the fell from afar, finally Cath had made it on.

Loft Crag and Thorn Crag followed, and then it was time to head down the path to the NDG, arriving just in time to gulp down a drink and bag of crisps before the bus to Ambleside.

4 thoughts on “A night on Madonna’s chest”