Looking down from Lynch Tor, I see the valley spread below, lush, green and beckoning us onward. Legs tired, water running low, and still a fair way to walk. The map shows a well-defined path leading down a valley between two ridges, and seeing the same on the ground we take it. Some way down the path, the next turn per the map just isn’t there and so we improvise. In a rapidly escalating instance of muddled thinking we try to fight our way down through the fields where the path should be. Cows block our route – my 11 year old companion is frightened of the lumbering beasts which are many times his size. Field boundaries on the so-called path have no crossing points and we are eventually coralled in the corner of one field by the bovine hoard.

My water is exhausted, the demands of liquid to lubricate the brain to navigate our way out of this fix having taken their toll. I have to broach the boy’s supplies, or we won’t get out of this mess. Miraculously, his Camelbak is still well-topped up – the boy is a camel himself. We battle back through the field to a recognised path and my brain now better oiled scrutinizes the map once more. Suddenly it comes to me what has happened – we wanted a path heading down into the valley with a ridge to the right, and seeing one we took it. Unfortunately, it was one ridge too early. We’re in the wrong valley. White Tor, now correctly identified as such, looks down on us seemingly mocking our derisory efforts to find our way off the moor. A decision is made to correct the situation by climbing the Tor. We stumble our way up as the sky begins to weary of supporting the sun. We barely pause at the top before we head down, finding the security of the path very quickly. But it’s the path to Cudlipptown we’ve hit and we find ourselves on a road there soon after. A slow sunset trudge along the lanes to Peter Tavy and the campsite ensues. Darkness is closing in and mountain rescue are close to being called as we make it back to the camp site. My several calls and texts back to base have either gone ignored or undelivered. Hot sweet tea is the order of the day as I try to make sense of what happened. Blame is set fair and square on the Harvey’s Dartmoor map for not showing field boundaries. Of course, whilst the lack of detail just when we needed it didn’t help, the real fault is in not reading the terrain, not judging distances properly, and simply seeing what I expected to see. Even so, I’ve never used a Harvey’s map for critical navigation since. And that evil Dartmoor, lying there looking so innocent, but really just lying in wait to catch you out…

That of course was a tale from my first foray into walking on Dartmoor in 2008. Things have changed since then. For one, I’ve done a lot more hillwalking, I’ve developed better skills, and gained more confidence. I’ve also been back to the Moor (you may have noticed), and the old fear of the place has long since vanished. Dartmoor is not the evil malicious trap that I perhaps once thought it is. Sure, what looks like a benign rolling landscape can catch you out if you are foolhardy, or if it’s in one of it’s dark moods, but it’s not lying there with the express intent to ambush me.

A few recent walks have taken me close to White Tor, but it has remained a disturbing memory of the past. Today though is time to confront my nemesis…

We park up just below Bagga Tor and a few moments are all that are needed to be standing atop it, looking down over the near hillside to see if we can spot Brousentor, on private land but supposedly quite close. We reason it’s not far the other side of the nearby wall, but with farm vehicles nearby decide not to investigate – we can always have another go at the end of the walk. And so the direction of the walk is altered and now we’re walking anti-clockwise.

We follow the track, part of the Lych Way as it heads up to Cocks Hill, but are eyeing up possible routes to cut the corner. White Tor is obvious on the skyline, but looks so far away that I struggle to get my head around how I could have stood somewhere near here 8 years ago and still thought I was the other side of the tor. We’re also trying to spot evidence of Hare Tor (Wapsworthy), not sure if it is the rocks we can see on the ridge line or if they are somewhere in a field. We find a way through the fields before we’ve gained too much wasted ascent and providentially find ourselves at Hare Tor.

A short climb later and we are clambering over the extensive White Tor. This tor has everything – multiple outcrops, range flag, hut, ancient remains. It’s a complete mess. Several minutes are spent just checking the rocky disarray. Then we head down to Little White Tor and the first of our “tor-sitting” stops.

Below us is a clear track that will take us on the next leg of the walk. It’s also the track we walked along for a short way on our Cox Tor walk in November 2014. The layout and inter-relationship of the tors is clear now in a way that it wasn’t in 2008. We hit the track heading upwards towards Cocks Hill. We pause for a few minutes at the standing stone before continuing, Jim and I forging a direct path to the top of the hill, Paul sticking with the track as long as possible.

Jim and I skip across the tussocks heading upwards until the point we run out of “up”. Which is difficult as the top of the hill is pretty flat. Jim’s GPS identifies as being at the spot height, but a dozen yards away I see something poking up through the grass. It’s a cairn. I head over to it and pose manfully on the mighty summit, leaving Jim to his spot height. Paul heads over to us from the track before we head back to the track at White Barrow.

Lynch Tor is a longer walk than it looks but soon we are at Limsboro’ Cairn and then the main body of the tor itself. Looking down from Lynch Tor, I see the valley spread below, lush, green and beckoning us onward. Legs ok, water supplies ok, and an ok distance still to walk. A complete contrast to 2008.

Standon Hill involves a bit of descent and re-ascent, a brief stop to chat with some ponies and then we’re there, surprisingly it turns out to be a first ascent (for Social Hiking anyway), and Jim is allowed the glory and the place in the annals. A bit more tor-sitting ensues. 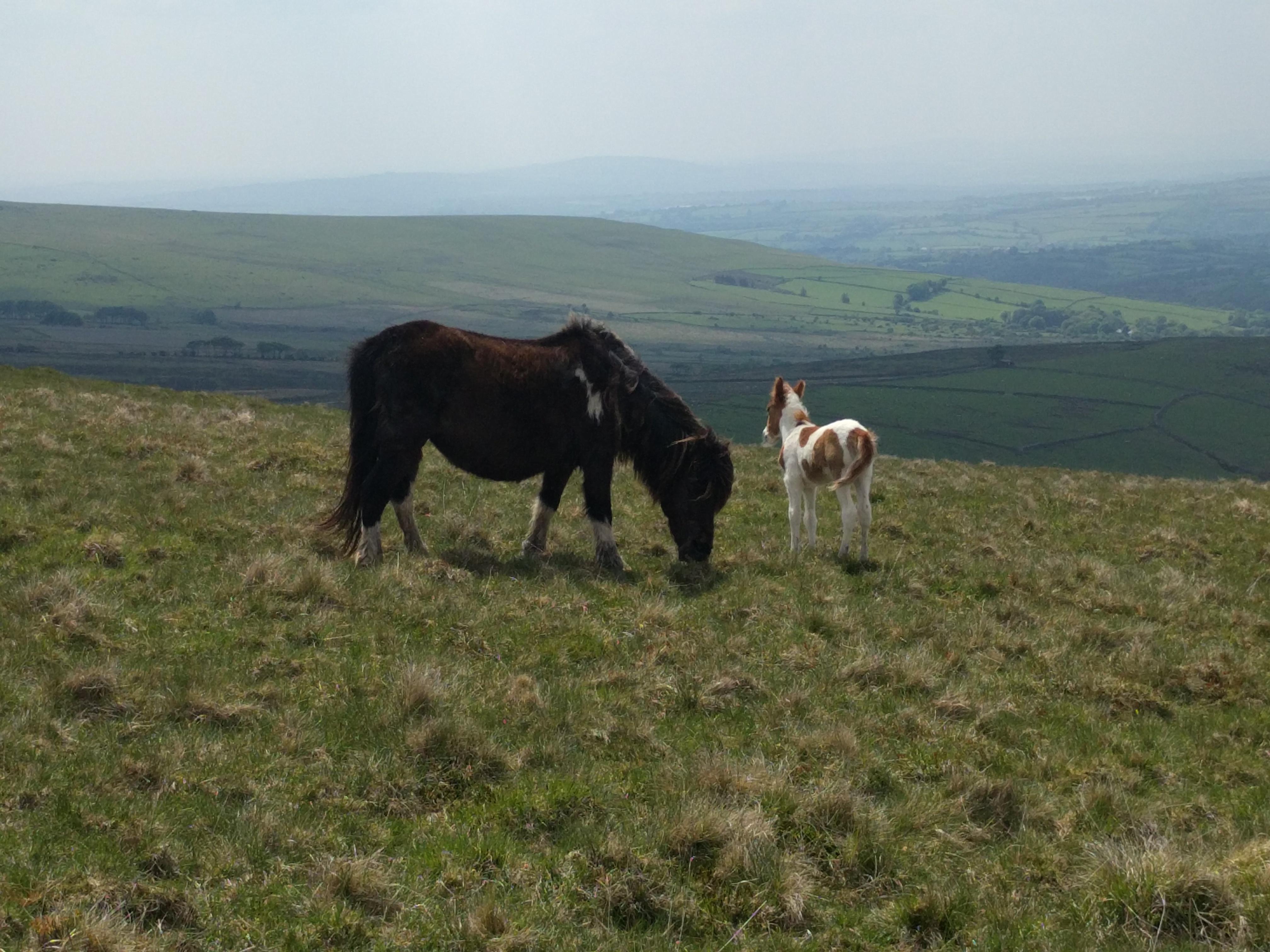 Finally we stir our stumps and make our way down through the clitter. A bit of fun and games crossing the rough fields at the bottom. It’s irritating to get wet feet so close to the end of a walk when you’ve stayed dry all day. Along the track to Brousentor Farm we wend our way. We can see the tor through the gateway, but the machine guns, guard dog patrols and landmines that must surely be there put us off. We work our way around the wall back towards the car. A break in the wall reveals the tor yards away and we make a dash for it, Brousentor is in the bag too.

Back in the car, I’m rather glad that the ghost of White Tor has been exorcised. We celebrate with a curry 🙂